With a fairly new album release and a very unique cornucopia of sounds and vibes, Mark and Kaliandra took time to talk about it.

This five piece is from Nanaimo, BC. And, currently for Mr. Goshness, happen to be Mark Tardif (Vocals, Guitar), Kaliandra Capri (Vocals, Guitar), Aidaen Carson (Keys), Myles Dunne (Bass), and Zack Friend (Drums). They formed in Jan of 2010 and even with a turbulent beginning with their line-up, this incarnation was able to self-release the lastest album, A Guide To All Things Twisted. Both the digital and physical versions came out in late 2014. The LP was mixed by Jim Blair at Ape Island Sound and mastered by Dave Harrison at Audities.

NRR: Obvious question(s) to start: How did you guys meet and how did the name for the band come about?
Mark Tardif: Kali and I met at a three day music festival where we were playing in two different bands. I was playing in a metal band at the time, and decided I wanted to start a project where I wasnâ€™t limited to a single genre. I knew I needed to include the right people in this project, and found that Kali had the unique and theatrical voice I was looking for. We have had a revolving door of other musicians in this project, but we are very excited about our current line up. Zack on drums joined at the beginning of the recording process for our debut album, Aidaen on keys joined this past summer and Myles on bass is the newborn of the band, just joining right before our cd release. We met all three of these fine musicians through our producer, Jim Blair.
Kaliandra Capri: We accidentally came up with the band name right after the band had formed. Mark and the original bass player had texted me something exciting (that I canâ€™t recall) and I wanted to reply with â€œoh my goshness!â€ Instead, I clumsy thumbsâ€™ied the text â€œoh mr. goshness.â€ The guys immediately decided that that name was the one and we have been Mr. Goshness ever since.
NRR: I’ve seen a few descriptions of you and your sound, in your own words without following the PR script, give me how you see your style and how it got that way?
Mark Tardif: I think of our music as being limitless, whenever I go to write something new I feel free of genre specific rules and expectations. I see our style as serious and whimsical at the same time, with a very theatrical presentation.
Kaliandra Capri: Our sound became the way it is by allowing our diverse influences to seep in, regardless of genre. Although our music has many different influences within it, stylistically itâ€™s consistently Mr. Goshness. Each band member brings something unique to the table, to collectively create the sound of Mr. Goshness.

NRR: With such a unique sound, have you found it hard to get booked to play tradition metal scene venues or have you actually found it easier to book because of the difference you guys can provide to a night’s billing?
Kaliandra Capri: Itâ€™s made it quite simple to find ourselves fitting in with many different groups. Weâ€™ve played rock shows, punk shows, metal shows and even played with a rap artist. Because of our diversity, we felt we had something different to offer each of those billings. We never felt out of place in any of those settings. We are fans of all music, so we are fortunate that Mr. Goshness allows us to indulge in many scenes.
NRR: Is the writing process a group effort or does one or two people write the lion’s share and then the rest help to polish it off?
Mark Tardif: I write the bare bones of each of the songs, the music and lyrics I write get presented as a â€œdraftâ€ of what the finished song will sound like. I demo the songs by recording the guitar, vocals and then use midi to provide some ideas for drums, bass and keys. I am by no means a bassist, drummer or keyboardist so the songs really begin to sound like Mr. Goshness once everyone else provides their own take on the song. Kali serves as an excellent help during the writing process, giving me ideas for directions the song can go or parts that may overstay their welcome. She also helps me a great deal with a lot of lyrical elements. For our debut album, the songs went through a very long preproduction process where our producer Jim Blair was very involved in fine tuning each of the songs, note by note.
NRR: Tell me about the new album. Being that you are a Canadian based group, if a possible new fan south of the border picks up the LP and gives it a listen, what would you want them to take away from the album more then anything else?
Kaliandra Capri: I would want someone to be able to recognize that a lot of hard work and time was put into the creation of this album. We would like them to appreciate the overall sound production, musicianship and songwriting.
Mark Tardif: There are a lot of different parts on this album, and we put a lot of thought into what each of the songs needed and where different parts should be placed. There were a lot of parts that were cut out because we found it didnâ€™t serve the song. Every part on the album has its specific home, and thatâ€™s partially why the album took three years to make. 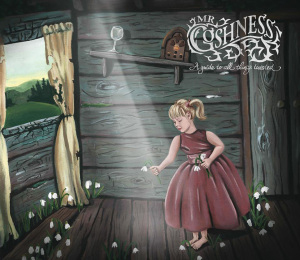 NRR: If band x’s manager calls you up as a group and says, “Hey, the group wants you to open a US tour with them”, who is the one band off the top of your heads you’d drop everything for to see it happen?
Mark and Kaliandra (simultaneously): The Dear Hunter.
Mark Tardif: Discovering this band really shifted my perspective of how diverse a body of work from a band can look like. If you have not had a chance to check this band out, we highly recommend it.
NRR: It may be in the grips of old man winter right now, but summer festival season isn’t too far away. A lot like the last question, which festival would you love to be on a stage with or what festival do you think would be the best for the band and be fun to do as well?
Mark Tardif: Some of our favorite bands have played both Coachella and SXSW. We feel that both of those festivals host a diverse line up of performers and we would be welcome.
NRR: You’ve been together since 2010 from your bio, give me the best Spinal Tap moment or other experience that still makes you laugh or shake your head when it gets brought up.
Kaliandra Capri: Well, at the end of the recording process we became quite eager to hear the mixes. I guess our Producer, Jim Blair, did not appreciate our messages asking how the mixes were going.. so he decided to reply with this: For every time that I get a “…so…..how’s the mix coming?” message, I will send you a random photo that has nothing to do with anything. This will briefly distract me from mixing, which will ensure that the mix takes longer. Just so you are in the loop. …Jim taught us patience that day.
NRR: You have to love music to be in a band and still enjoy the process. If it wasn’t for the love of the music and the band, what would be your day job(s) in place of the pursuit of the rock dream?
Kaliandra Capri: I would totally be a voice actor. I love taking on different characters, [persona’s] and making weird noises with my voice. My mommy used to call me Kali the chameleon, for those reasons.
Mark Tardif: A teacher, hands down. Teaching is such a rewarding experience, the amount of positive change a good teacher can make is incredible. I also find it amazing that every day at work would be a completely different experience, you would constantly be seeing and hearing things you wouldnâ€™t find at a typical day job.

NRR: Last one and I’ll quit asking the tough ones, being an unsigned at the moment band, how important are the bandcamp’s, Facebook’s, YouTube’s of the world not only to get the music out there but also to stay in touch with your fans?
Kaliandra Capri: We very much rely on the majestic networking powers of social media sites. Trying to build a following solely through touring doesnâ€™t seem to be as effective these days. People who want to take a chance on new music in a live show setting are few and far between. Building a fan base through social media sites is helpful for when we do begin to tour.
Mark Tardif: Social media sites are also helpful in that they offer a more well rounded entertainment outlet for fans. We try to keep up to date with important events or funny videos to keep fans engaged. The sheer amount of music available online makes it difficult to convince someone to even listen to new music. Once we get new fans it is important to give them reasons to stay interested.
NRR: For Kaliandra, do you have your standard answer ready to go for when you hit the US markets and the eventual comparisons to Hayley from Paramore are made to your vocals? Not so much saying your styles are the same but your voice does having a striking resemblance.
Kaliandra Capri: I feel people have this need to compare new things to something they are familiar with. Itâ€™s a comfort thing, so I welcome all opinions. If I were to be compared to anyone, I would be flattered to be compared to Hayley Williams. Her range is incredible and her delivery is powerful. She is someone I look up to when it comes to vocal talent, among others.

A few of Mr. Goshness’s shows are listed below. If you’re in the Great White North, those shows will have to be pretty hot and a great live experience. If you do make it out, let us know what you thought.