It’s been a long time since pop-punk songstress Louise Distras released debut album Dreams From The Factory Floor, but new music is just around the corner.

September sees the release of new single “Aileen” from Louise Distras, with a busy tour to follow. Prior to heading out on the road, Louise took time to chat to National Rock Review about the single, touring, and plans for a new album.

NRR: Louise, thanks for taking time out to answer a few questions for us at National Rock Review.
Louise: It’s a pleasure to chat with you, thanks so much for your time!
NRR: After a long wait, we get to hear some fresh music with the new single released in September. It’s another song with a tough subject matter for you – what can you tell us about the story behind the song, and why you chose to tell it?
Louise: Well Aileen was written in late 2014, but because I’ve been on the road so much touring my first record I just never had the chance to go into the studio to record it until recently, so I’m really excited that it’s going to be put back into the universe on 30th September. I really can’t wait for everyone to hear it.
One night after a show I watched the Nick Broomfield documentary Selling of a Serial Killer, which is about America’s first female serial killer, Aileen Wuornos. As someone who has experienced homelessness and sexual assault, Aileen’s story hit me pretty hard but left me feeling inspired to share it through my music.
The film also left me with my own questions about rape culture and nature VS nurture, so I decided to make my own DIY film that explores the lyrical content of the single. It’s called Real Outlaw â€“ A Commentary on Rape Culture and the Riot Grrrl Movement and will be released alongside the single on 30th September.
NRR: You have chosen to work with Steve Whale (The Business) again on this project, along with Ross Petersen (Bruce Springsteen, The Vamps, John Mayer) â€“ what do you look for when picking producers for your material?
Louise: Working with Steve and Ross has been entirely organic, and for me the process of making music can’t happen any other way. It’s essential to work with people who are sympathetic to what I’m about and trying to achieve. If the arrows aren’t all facing the same way then there’s just no point.
NRR: The new single is a slight change of direction for you, moving away from hard-edged punk a little and more towards rocky pop. Was that a conscious decision or just the way the song developed?
Louise: I grew up listening to ELO and The Bee Gees and have always been a massive fan of pop melody. I have always maintained that it was never my intention to repeat myself and make another Dreams from the Factory Floor.
The new direction hasn’t been a conscious decision, I think it’s just more a case of growing as an artist and becoming a better songwriter.
NRR: Will there be a new album to follow? What can we expect from that?
Louise: I’d like to think that Aileen will give people a bit of an idea about what to expect from the second record. It’s pretty much ready to be recorded, although there’s various logistical and financial issues that will determine exactly when that will happen. However, I’m very blessed to have such amazing and supportive fans who have expressed huge interest in helping me bring this record to life, so I’ve decided to launch a fundraising campaign in September so we can make the record together. All being well I hope to be in the studio early next year, fingers crossed!
NRR: The debut album got great reviews and is still selling â€“ you must be pleased with how it’s been received?
Louise: When you consider how much the music industry and people’s attention spans have changed over the past three years â€“ where so many bands release a single one week that’s forgotten the next – the fact that Dreams is still selling and resonating in such a big way is a huge testament to the songs. When people tell me what this music means to them, it inspires me and gives me a lot of energy to keep going. I really hope to carry on doing this forever!
NRR: You’ve not been resting over the last three years â€“ lots of gigs and tours on both sides of the Atlantic supporting some great names. You obviously love touring. Do you prefer smaller or larger gigs, or maybe festivals?
Louise: I love them all! However, I’m really excited to hit the road with my band for the Aileen tour this Autumn. Come and see us! 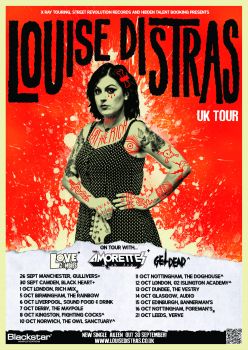 NRR: This year we managed to catch up with you at Camden Rocks Festival, playing a great set in a packed venue with people queued up outside not able to get in â€“ these times must make you proud of what you do and make the hard work worth it?
Louise: I flew back to London from Los Angeles the day before the show, so I was jetlagged and puking in the bathroom about five minutes before I hit the stage, haha! But I couldn’t believe how many people showed up; it was an amazing show, but I felt so bad afterward when I heard that people were being turned away.
Sometimes I feel proud, and sometimes I feel really insecure, but I have never questioned whether any of this is worth it because I believe that it’s always worth it, no matter what.
NRR: Do your audiences differ between America and here/Europe?
Louise: Both audiences are amazing of course, but there are obvious differences. The US audiences are raucous, they have a lot of energy and love to go crazy at shows whereas the UK audiences are generally a bit more reserved, but that’s not a bad thing at all.
One of the many things I love about the US is that there’s a lot of all ages shows happening. Those kinda shows are rare here in the UK, and that’s something that really frustrates me. I can’t stand the fact that the people who care about live music the most are the ones who are excluded from experiencing it. It’s just not fair. More all ages shows please!
NRR: Your list of musical influences and bands you like make for an interesting read, and may surprise some people. What do you look for in other people’s music, and who should we be looking out for?
Louise: Like everyone else, I just love a good song that makes the hairs stand up on the back of my neck.
There’s a young up and coming country singer from Saskatchewan, Canada named Colter Wall. His song ‘Kate McCannon’ is one of my favourites and can be heard on Youtube.
Here in the UK, Shabsi Mann from East London plays amazing avant-garde, experimental punk rock. And don’t forget the name Brandy Row because you’ll be seeing a lot more of him in the near future.
I’d highly recommend checking out all of these artists on Youtube, Spotify, etc. and if you enjoy their music, please support them!
NRR: In those rare quiet moments when you have some time, what is your go-to album of choice?
Louise: I have a few go-to albums but recently I’ve been listening to a lot of Stone Temple Pilots, REM and The Beatles.
NRR: So to wrap up, what’s next in store for Louise Distras?
Louise: My new single, “Aileen,” and the Real Outlaw documentary will be released on 30th September followed by a UK tour with Love Zombies, The Amorettes, and Get Dead. Before the end of the year, I’ll be heading over to mainland Europe with my band as part of the Aileen tour, and I’ll also be launching the fundraising campaign for the new album. Then hopefully I’ll be back in the studio at the beginning of next year, fingers crossed!
NRR:Many thanks again for talking to us, and best of luck with the single.

The new single, “Aileen,” from Louise Distras is available for pre-order.