Muscle cars, mosh pits and the Motor City, the Twistin’ Tarantulas tell us about life, then and now.

A legend from the days of Motor City hardcore punk, Pistol Pete, gets nostalgic on the latest CD from the Twistin’ Tarantulas along with guitarist Carl BradychockÂ and drummer Nick Marocco, beginning with “Flight of the Superbee” an instrumental that intros with the sound of a cold-starting starting muscle car. 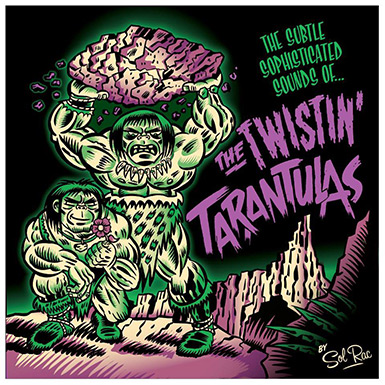 The Subtle Sophisticated
Sounds of the
Twistin’ Tarantulas

“Take this Torch” appears to be a call to action for angry young punks to take their rightful place, while “Today is Tomorrow” warns of the consequences of living only for today.

In “Dog Trackin’ Nova,” you can almost smell the race gas in the chorus, but the song reveals some of the downsides to muscle-car ownership. Â “Ridin’ In The Mighty Dodge” is an ode to a trusty workhorse, the band’s van that served them well and carried the group and their equipment to gigs far and wide.

“Sit On My Ass” outlines the to-do list one husband creates for himself when the wife spends time with friends and “Hope I Fall At Wal-Mart” tells of the frustrations and consequences that occur when the worlds largestÂ retailer comes to a small town.

A true gem in this collection is “Stage Diving Fat Kid”, is a ballad of a real person in the early Detroit hardcore Punk Scene, who took it upon himself to demonstrate that being a jerk in the mosh pit has consequences.

The Subtle Sophisticated Sounds of the Twistin’ Tarantulas is a brilliant collection of songs in their signature Jump Blues Rockabilly Punk style, with an unexpected layer of wisdom. Â The songs are thoughtful and nostalgic, and of course, very entertaining.

Mick McDonald sat down with drummerÂ Nick Marocco at M-Brew in Ferndale, MI a couple of weeks ago to discuss the new album.