Zack Elizondo sat down with National Rock Review for a short spell to talk about friends, lots of Lone Star beer, and a demon spider.

We Were Wolves is a Houston, Texas based band comprised of Drew Haught (Vocals), Vinc Prihoda (Guitar), Chris Badger (Bass), and Zach Elizondo (Drums). They recently released Ruin Your Weekend on Jun 16, 2015 through all the normal digital retailers. This is their third studio recording. So, without anymore cattle rustling, on to the show.

NRR: Tell me about the band. How did the band get together and how did you settle on the band name?
Zach Elizondo: We’ve all known each other for a long time. Vinc and Drew have known each other since 2nd or 3rd grade. I met those guys in high school. We met Chris during that time just through playing local bands. We all been in a band with at least one other member before Wolves, so it was only a matter of time til we all got together. The band name just kinda came up in conversation. We had booked shows and forgot to give ourselves a name. We Were Wolves sounded cool so it stuck. 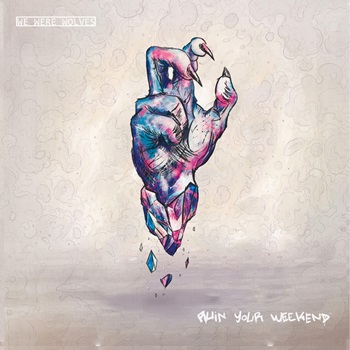 NRR: You have a new EP out, Ruin Your Weekend. What can you tell me about it?
Zach Elizondo: Yeah! It’s a four song EP. We recorded it at The Bubble in Austin, TX with Chris “Frenchie” Smith. We’re all very excited about these songs!
NRR: How does a typical song for you get written? Is it one person or is the process a true group effort?
Zach Elizondo: It’s usually a group effort. Drew, Vinc and I live together and Chris is right down the road. So when somebody comes up with am idea, it’s ready to grab the closest person to you to stay building on it. Then, when we have official practice we put all of our heads together.

â€œWe are super happy with this EP. We’re a live act, which is a hard thing to translate into a recording but we were lucky enough to create it with people who understand how rock and roll should be recorded. We canâ€™t wait to release it and see what happens.â€ ~ Drew Haught

NRR: You guys are out of Texas. How would you describe your sound for those that haven’t had a chance to hear you before?
Zach Elizondo: Rock and Roll for sure. A lot of it is really high energy, while we can still chill out with a slower more flowy song. Either way, it’s a guaranteed party!
NRR: On that same note, for new fans and old alike, what would you like to them to be able to take away from the new CD after listening to it the first time?
Zach Elizondo: You can definitely hear a more mature sound from this EP. It’s crazy, because at times its so intense and other times very melodic. After listening to it, I want the listener to say, “Holy shit, I’ve got to hear more!”
NRR: The band has been around since about 2008. What would the band of now tell the band of 2008 to make the journey go a little more smoothly?
Zach Elizondo: Stay focused and don’t get discouraged. Sure there’s plenty of those “if I could go back” situations, but would we be where we are now? Who knows?
NRR: You guys are no strangers to the grind of going out on the road. Is there a story or experience that when it gets brought up still makes people laugh or a little sheepish? Your Spinal Tap moment if you will.
Zach Elizondo: It’s hard to narrow it down to one. Falling into our own gear during a show. Slicing fingers open, again on our own gear. Sneaking into hotel pools. Plenty more I probably shouldn’t share. Let’s say I’ve woke up on more than one occasion with my beard shaved into a mustache and red and black sharpie all over me!
NRR: If the manager of band x gives you a call, who is the band that you drop everything to go out with for a few months?
Zach Elizondo: Again, tough to narrow it down to one. We’re all big Queens of the Stone Age fans, that’s an easy pick. Foo Fighters and Red Fang are easy choices too.
NRR: Not sure what you fine gentlemen may drink while playing, but if a major adult beverage company said they wanted to give you money and free samples, what is the drink or brand of choice to be represented by the band?
Zach Elizondo: Beer and whiskey are just fine with us, (laughing). I don’t think any of us are sold on a particular brand, but we do drink a lot of Lone Star.
NRR: As an artist, would you rather have moderate success with all original music or have huge exposure with one song off of a cover of someone else’s material?
Zach Elizondo: I think becoming successful off of original material is much more gratifying. Not knocking cover tunes, because I’ve heard some really cool versions of various songs, and I’m definitely not above doing a cover. To be successful from something that came from you and your best friends, what more could you really ask for?

When We Were Wolves – “Ruin Your Weekend”

NRR: What’s that last song you listened to in the car by choice?
Zach Elizondo: The Bronx – “Oceans of Class.”
NRR: Is there a creepy crawler that will make four grown men act like the hounds of hell are holding you hostage until the offending party is removed?
Zach Elizondo: A spider in the van that will not die, no matter what, and you have no idea where it is!