If youâ€™ve followed rock music at all over the last 40 years, chances are you have read the work of rock journalist, Lisa Robinson.

The recently released, There Goes Gravity, A Life in Rock and Roll, is the personal account of Ms. Lisa Robinson, and it doesnâ€™t get more detailed than this.

Lisa began her career purely by accident in the early 70â€™s, eventually touring with the Rolling Stones and Led Zeppelin, and writing for numerous magazines including Creem, New Musical Express, and The New York Post, to name a few. She has interviewed anyone and everyone in music, even outside the traditional rock genre, and her stories and experiences are unparalleled.

The book itself is well written and thorough. As Lisa is a journalist by trade, she has thousands of hours of cassette interviews, innumerable notebooks of observations, and boxes upon boxes of notes at her disposal. 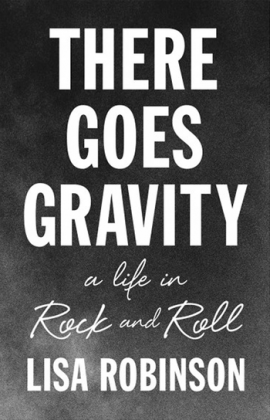 The tales recounted in her book are backed up not only by her personal memories of being there, but by these one-of-a-kind resources that cannot be fabricated or duplicated.

Robinson has had access to legends such as Michael Jackson, John Lennon, Robert Plant, Patti Smith, and Mick Jagger. She was integral in the early New York punk scene and is a legend in her own right. Her contribution to the world of rock music cannot be underestimated as she was not only a rock journalist, but an insider while these musicians became her closest friends, and she their confidant.

Truthfully, that is what is so different about this book in comparison to so many others. The history recounted within its pages is so exact and first hand, the reader gets a very real sense they were there as well. It is obvious while reading that Lisa was, and continues to be, an actual part of the rock world, not merely an observer or reporter, but a rock star in her own right.

There Goes Gravity, is treasure of rock music history you couldnâ€™t possibly find anywhere else. If you hadnâ€™t heard of Lisa Robinson before, now is your chance. Get to know, truly know, our rock music legends through her eyes. You are guaranteed to learn something new.