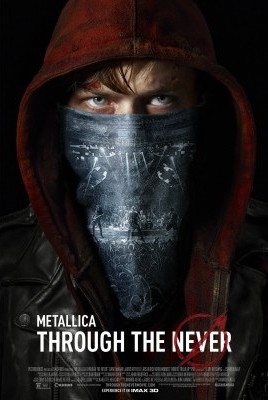 METALLICA “Through The Never” – Concert Film Review
National Rock Review attended the Detroit media pre-screening of METALLICA “Through The Never” at the 3D-IMAX theatre in Sterling Heights, MI. This epic concert film directed by Nimrod Antel and written by Metallica themselves, stars young actor Dane DeHaan as “Trip”, a sort of honorary roadie sent on a mission to pick up and deliver some goods for the band.

In the opening scene, “Trip” parks his van and enters the venue through the loading dock at a stadium where Metallica and crew are busy setting up and preparing for the concert that night. Trip casually strolls into the stadium passing members of the band as they are warming up. He gets waved past security and in one of the few spoken lines (other than song lyrics) in the film Metallica greet him “Trip! You’re here man, we need ya!” This sets the plot in motion as the audience waits to see the mission Metallica has for “Trip”.

This opening sequence also gives the audience a first person view of what goes on backstage before a Metallica show. Dozens of roadies and tech’s rush by pushing giant stacks of speakers and equipment. Pieces of stage props are hurriedly carried past “Trip” as he ducks and jumps back several times to get out of the way of the orchestrated debacle that happens behind the scenes, with James Hetfield as master of ceremonies, directing the backstage Metallica pre-show circus. A notable and incredible moment in the opening sequence offers a thundering instrumental warm-up scene as “Trip” walks by a room where Metallica Bassist, Robert Trujillo displays his bass playing skills.

Just before Metallica band members take the stage, they send “Trip” on his mission. “Trip” goes where Metallica sends him, picks up the goods, and his death-defying adventure begins. Between flashes of live concert footage shot of Metallica in Canada during a 5-concert series staged specifically for the filming of this movie in August 2012, “Trip” is involved in a car wreck, is chased by a deadly masked horseman, and encounters massive crowds of rioting people on the streets of a city reminiscent of apocalyptic times.

The plot is intentionally rather loose, but the nature of “Trip’s” adventure is not lost on the audience. As he attempts surviving death in the various forms it comes at him, he does so in a seemingly unaffected manner, refusing to allow a single obstacle to slow him down or prevent him from fulfilling Metallica’s mission.

The live concert footage offers the audience an incredibly stunning first person view of every member of Metallica as they perform a repertoire of songs from their 30 year career. Thunder and lightning strike and the stadium shakes and shudders with every note. Think of the absolute best concert you have ever been to, multiply by ten, add standing next to James Hetfield, Kirk Hammet and Robert Trujillo onstage, and sitting next to Lars Ulrich at the drum kit. That is Metallica’s “Through The Never”. Go see it in 3D-IMAX theatre’s and buy it on Blu-Ray when it becomes available. ~KK

The official 2 Disc Soundtrack for “Through the Never” was released on September 24, 2013 on Blackened Recordings and is now available for purchase.