The big, bad Wolf has always been metal. However, for some reason, our money would be on Julie in the little, red, riding hood.

If you like to be ahead of the curve, and even throw those damn hipsters for a loop, the we cordially invite you to read further. Julie and The Wolf is a new, not so new in rehearsal, two piece from the Great White North, or Montreal, QC for the rest of the lower 48. Julie contributed her classical piano virtuosity to the score for Academy Award-winning short film The Lady in Number 6: Music Saved My Life. Wolf Merzbacher is the strong willed metal head that had an idea and hunted his partner until she finally said yes to making music with him. Their album, Ablaze, comes out Oct 30, 2015 on the Audiogram record label. National Rock Review had a few minutes with the wolfster and his muse of the ivories, okay one question for her, and got to know them and the project. Enjoy the interviewÂ and let us know what you thought in the comments below.

NRR: Thanks for taking some time out guys to answer some questions. What’s been going on with the band, Julie and the Wolf, in 2015?
Wolf Merzbacher: Accomplishmentâ€¦ thatâ€™s 2015! After three years of recording, mixing and mastering (yes, I know, three years is a bit of a stretch nowadays), finally got this first album done, then we were able to figure all the visual aspects which we are very proud of.
NRR: “The Devil Is the Man,” is your new single, correct? Why did you choose that song to be your first release?
Wolf Merzbacher: It just speaks perfectly of the record, setting the tone for the rest of the album. Itâ€™s also a subject that is very universal, it speaks of anxiety, depression and that voice inside that constantly drags you down. And we are unfortunately in an era where this state is very common.
NRR: For the sound of the band, self described as ambient post-metal, how would you describe it to new listeners?
Wolf Merzbacher: Itâ€™s Julieâ€™s classical roots blended to my metal heritage, both without compromise and completely assuming our end!
NRR: How was the experience of recording Ablaze with Audiogram?
Wolf Merzbacher: Honestly, a blessing! We were fortunate enough to have Michel BÃ©langer, the label owner, and his 30 years of experience take part in the production and mixing. We were given artistic freedom, within reason, and given the opportunity to work with great people, including Shaun Lopez (Far, Crosses, Deftones) who recorded, produced and mixed the vocals in his studio in Burbank. It was just an amazing three years in the making!
NRR: How did the writing go for the album? Was it a shared process from start to finish? Is your method of writing pretty structured or is it very free and flowing?
Wolf Merzbacher: Total shared process. Julie comes up with all the music. Then I get the lyrics and vocal melodies down and then we meet up and blend it all together. Once the core is down, if the song calls for it, Julie either gets an arranger for strings or she does it herself.
NRR: Describe the dynamic of the band for me. How did you come together for such a unique pairing of styles?
Wolf Merzbacher: The dynamic is based on a mutual understanding and respect of each otherâ€™s background. The pairing of styles came together very naturally. I had heard Julieâ€™s music and was blown away. I asked if I could sing to it, her first response wasâ€¦ FUCK NO! And then, since I had the .wav files, I just did what a stubborn person would do and sang to it, sent it off to herâ€¦ and she loved it!
NRR: What is the Montreal music scene like and is it easy enough to get shows for you guys?
Wolf Merzbacher: LOVE the Montreal music scene, itâ€™s a happening scene, a lot going on, festivals all the time! So far, we have no idea how hard it is to get a show in this city with this project since we had only one show before getting signed on a demo (yes, that still happens, we are the living proof). Then we recorded for three years andâ€¦ here we are! So letâ€™s see!
NRR: What has been one or two of the more difficult lessons you’ve had to learn since you started out to make your mark in music? 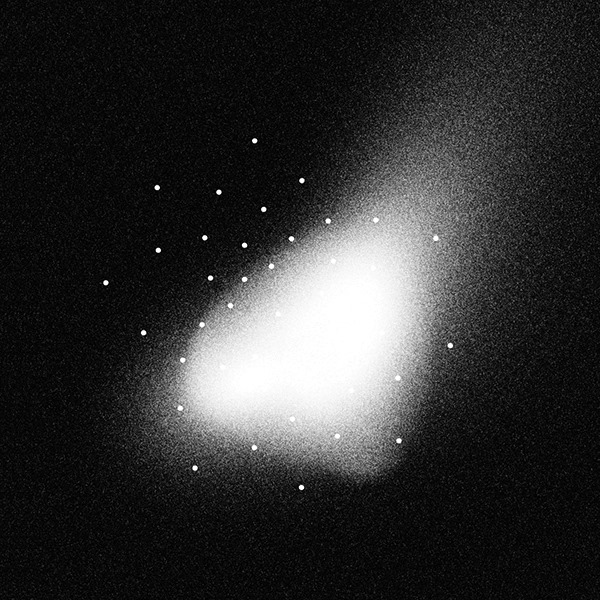 Wolf Merzbacher: I know itâ€™s a little cliche, but just never, ever, ever give up! There are so many road bumps for an artist, a lot of great music never makes it out there due to the fact that artists give up. You kinda have to be a little insane to put up with everything that comes your way… And always stay true to yourself and your roots.
NRR: Is there a moment, that thinking back on it now, in the your career that you can’t help but still feel a tad bit embarrassed about, makes you laugh about despite yourself, or just still makes you shake your head in disbelief? A Spinal Tap moment if you will, that you’d be willing to share with me?
Wolf Merzbacher: I Love Spinal Tapâ€¦ I was giving a high school show and the technician had poorly assembled the stage. He had forgotten to screw tight some planks. The stage caved as I was headbanging and I ended up under the stage. Of everyone that was onstage, Iâ€™m the only one who fell. Fortunately, I wasnâ€™t hurt.
NRR: How important is social media in today’s fandom for you and bands in general?
Wolf Merzbacher: Itâ€™s immensely important, especially for new projects like us and itâ€™s a great outlet to reach out to as many fans out there all over the planet. It has to be done in a smart dosage and tasteful way, though.
NRR: Julie, you’re described as being classically trained on the piano. How long have you been playing and would you prefer a grand or a keyboard if you could only play one for the rest of time?
Julie: Iâ€™ve been playing for almost 40 years, and would definitely go for the grand, nothing beats the physical feeling of resonating with a beast!
NRR: Will there be any supporting videos or tour for the new album and if so, what can we expect in the near future from you?
Wolf Merzbacher: There will be a video for â€œThe Devil Is The Manâ€ releasing early October which we are quite excited about. An album release show will take place Oct 29, 2015 at the Phi Centre in Montreal, QC. The album is coming out worldwide Oct 30, 2015. As for a tour, that will be determined after the album release.
NRR: Wolf, just in case some of your new fans south of the border don’t know, what is your background in music so that people can be a little more up to date on you?
Wolf Merzbacher: Iâ€™m from the alternative-metal world. Big fan of Deftones, Tool, Far, and Meshuggah. Had an alternative-metal band for 15 years called, Ileana. Musically self-taught but… vocally, Iâ€™m kinda classically trained, in the sense that in the last 15 years, my two vocal teachers both came from the opera world and had a classical approach to teaching vocalsâ€¦ even for metal dudes.