The countdown clock has been started! Let the guessing game begin!  The 2017 Louder Than Life Festival line-up will be announced at noon on Tuesday,  May 30th.

Rumors have been swirling around for some time as to who will be performing this year.  Ozzy, Metallica, Stone Sour, Korn, Five Finger Death Punch, Ramstein, Rob Zombie, Marilyn Mansion, System of A Down, Linkin Park, Gojira and Prophets of Rage seem to be high on everyone’s wish list.

The Louder Than Life festival returns to Champions Park in Louisville, KY for its fourth year of rock â€˜nâ€™ roll, gourmet food, local craft beer, and the mind-blowing Bourbon World.

In only three short years Louisvilleâ€™s Louder Than Life has become a key destination show at the end of the festival season for many. With past headliners such as Judas Priest, Kid Rock, Rob Zombie, Godsmack, ZZ Top, Shinedown, and more recently last year with Avenged Sevenfold and Slipknot, Louder Than Life has brought the very best to the Champions Park stages.

The response has been overwhelming with 2016 topping 50,000 in attendance for the second year in a row and 2017 promises to be bigger and better. 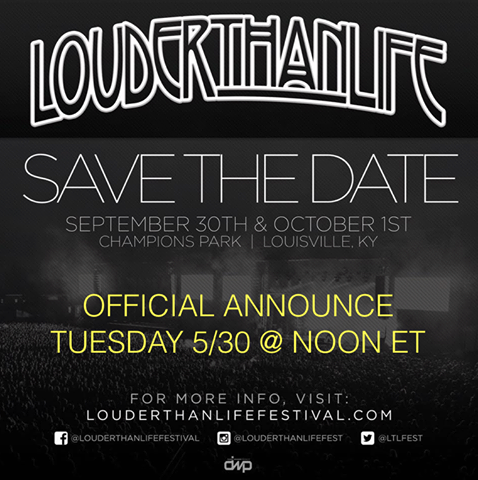