While Detroit can be dangerous at night anytime, Halloween seems to bring out fires and ghouls. However, Putnam’s Halloween is a scary good time.

What started out in 2009, as a simple house party for Jason Putnam to celebrate his birthday, has become one of the most sought after tickets and good times in the Detroit Metro area. Putnam’s Halloween ’15 is looking to fill The Crofoot Ballroom to the seams with costumes, music lovers, and of course, booze. Putting his money where his mouth is, his company, Eternally Nocturnal, is one of this year’s sponsors.

National Rock Review had to threaten, strong arm and tease incessantly to get a few well deserved moments from Jason to toot his own horn on the continued success of the party. If you have any stories or photos from previous years, we would love to see and/or hear about them.

NRR: Thanks for giving a few precious minutes to National Rock Review to talk about the party. How did Putnam’s Halloween start?
Jason Putnam: In 2009 I started throwing a Halloween costume party at the house I was renting in Redford, MI. It was also a birthday party for myself since my birthday is Oct 22, it only made sense to mix it with Halloween. It started as a minimal invite, normal, small party. I decided, to make it a little more memorable, I would spend hundreds to decorate the whole house and buy free drinks for the whole party. After about 30 plus of our old and new friends started coming through and hanging out, they noticed the free booze. Everyone knows that free booze is a lighthouse in a dark sea for drunk partiers. The word started to get around that I stocked the house with plenty of booze for all, and the people started flooding in. Before we knew it, we had about 150 of are old friends, new friends, and people we’ve never met before filling our entire house. The party went great and it was one I will never forget.
NRR: Okay, sounds like your typical legend being born. What happened the next year to keep the mojo following for the party?
Jason Putnam: We decided that since the last year went so well, my roommates and I should do it again. We thought maybe we could make a tradition out of it. This year went similarly to the last with full decorations and free drinks for all. I decided to get more drinks this year because I naturally expected a few more people this time. I also had some people bring drinks to donate. The party started off with a blast and people started filling the house immediately. In no time we had 100 plus people fill the house. Once again people got word of the free booze and they started calling their friends. All the familiar faces from the previous year along with about 100 more people came through and we had a party like none other I’ve ever been to. It was great. I always made it a point to leave all drama at the door and just have a good time, this was always the main theme of my parties. 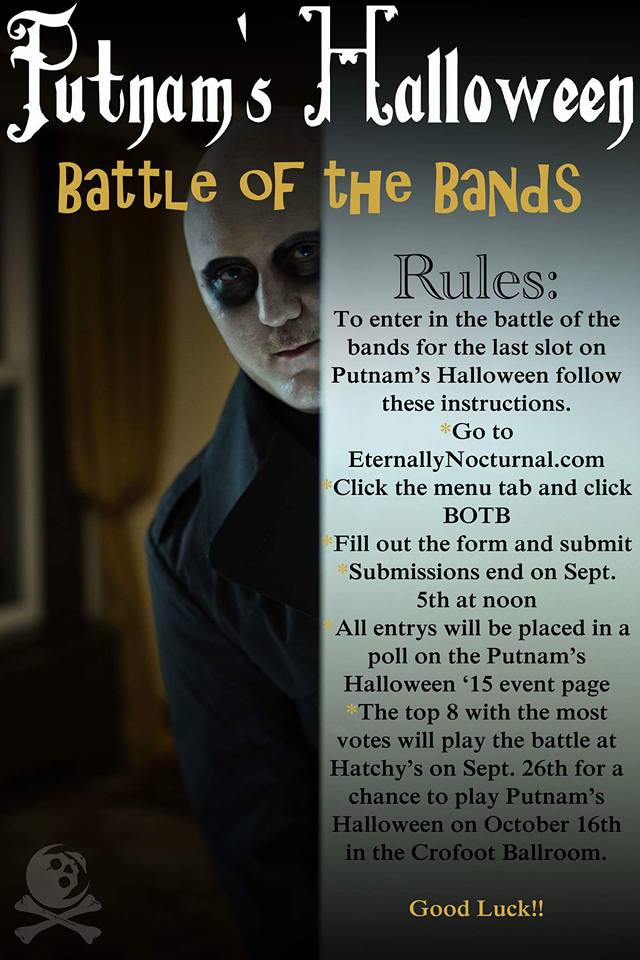 NRR: Natural progression for sure. But how did the name get attached to the party?
Jason Putnam: The first two years of this party were such a success and so memorable, that the word spread around throughout the year. By the time October came around, all of my friends were expecting another big Halloween bash. I had so much fun the previous years, so I decided to have one more big bash in the house I was renting before I left. This year not only did I decorate, but I bought about 400 plus dollars in free booze this time and hired a DJ who went by the name “Silly” and played music in a Morph Suit. They were pretty new at this time, (laughing).
By the time, the party started the house quickly filled up with 200 plus people. A few hours in, once the word got around again, people started leaving other parties and coming to ours. We ended up having over 300 people in a small Redford house, don’t ask me how that worked. That night my friends started calling the party Putnam’s Halloween, and the name was born. This party went very smooth as well with the exception of a trashed house, but it wasn’t anything we couldn’t handle while sipping on hangover beers that Sunday morning.
NRR: Alright, so the name is now official. It’s 2012 in the timeline of Putnam’s Halloween. I’m guessing the rented house is gone and the first major move happens at this point?
Jason Putnam: This year was the game changer. I no longer lived in that Redford house, but I frequently went to my friend Ian, Sara, and Adrian’s house which went by the name “Fort Castle”. This place was a giant run down house with no neighbors in Livonia that was literally built for parties. It’s safe to say I spent most of my weekends there. Putnam’s Halloween was officially an annual tradition and I knew that even though I moved out of my old house, it needed to still happen. I decided this year that we needed to step it up a notch or two. I decided that not only did we need decorations, free booze, and a DJ, but we needed live bands.
SycAmour – Calm Down Juliet (What A Drama Queen) [Live Video]

I was new to the local music scene at this point and I didn’t really know where to start. My friend, Darren, had told me about this awesome local band that he loved called, SycAmour. I looked them up and absolutely loved their sound. I also saw that those dudes and a handful of other local bands were playing the local stage at Scream It Like You Mean It at The Crofoot. I loved the whole lineup and decided this would be a good chance to talk to all these local dudes. So we went to the concert on a mission to book bands for our upcoming Putnam’s Halloween party. I loved all of the bands that played the local stage and after a few of their sets I talked to them. That day I talked to and booked Dismember The Fallen, At The Hands of Victims, and SycAmour. Earlier that same year, I helped out with a music video by the band Crackjaw, so I naturally asked them too. In no time, we had a four band lineup, and a DJ for the party. That year we went all out and spent over 1,200 dollars on decorations and free booze. I wanted this to be a night no one would ever forget. We had roughly four half gallons, ten-fifths, two kegs, 400-500 jello shots and two coolers filled with jungle juice. We were prepared and had multiple bartenders ready to hook everyone up. At this party, we were taking donations at the door as well.This party filled up with 400 plus people throughout the night and was pure insanity. It was a party like none other I’ve ever seen. It got so big that the cops rolled up asked a few questions and said, “Enjoy your night”. No one could stop this party. The bands were amazing, the people were amazing, and we ended up making most of our money back in donations. It was absolutely unforgettable. Oh, and the hangover was definitely real, (laughing).
NRR: So, every year the sheer volume of booze hounds, party animals, and friends has grown by at least a hundred every Halloween. What do you do at this point to keep the buzz on the show?
Jason Putnam: It was 2013 and time again, the annual Putnam’s Halloween party was coming up quick. The word now spread not only through all of my friends but the local music community as well. It had so much hype behind it this year. I knew a house could not contain it anymore. It was time for a venue. We needed something of a decently smaller capacity, laid back, affordable, and close by. We decided to have it at the legendary Token Lounge in Westland, MI. It was about a 600 cap venue, so with our 400 plus people the last year, we figured this would be perfect. We booked a full lineup of amazing locals and had SycAmour and Crackjaw co-headline the show.
It felt like tradition having those guys back again. The show was amazing and we had a packed house of 400-500 people. It was an amazing night and the annual party continued to grow once again.In 2014, we decided to do another year at the Token Lounge. We had no idea how big that year was going to be…That year we wanted to have the same headliners again, but sadly Crackjaw had broken up earlier this year. So we decided to have the amazing and upcoming stars of the local scene, SycAmour, headline.
Earlier this year the dudes in SycAmour actually got signed by Hopeless Records so they definitely deserved to headline. 2014 was also a special year because it was the launch of my brand new clothing line Eternally Nocturnal. We did so much promotion that year, including making a horror video short with the very talented director Brandan Keller, who created most of the SycAmours music videos. This year was set to be a big one and it definitely was. With the help of my girlfriend and business partner, Halie, and many of my friends, we went all out and gave that venue a show it hasn’t seen in many years. We ended up going over the cap and had about 750 people fill the Token Lounge completely. It was insane! The party was a huge success and so was the launch of my clothing line. I couldn’t have asked for a better night.
NRR: That brings us up to this year’s edition of Putnam’s Halloween. How did The Crofoot Ballroom get involved with the now established tradition and what teases can you give us about the party next month?
Jason Putnam: The success of this annual event, Putnam’s Halloween, spread around many cities and through the whole local music scene. This is when I was told that a couple people at The Crofoot Ballroom were noticing our growing success and were interested in speaking with me. My good friend, Don, was the first one to bring it to their attention and they liked what they saw. I spoke with Mike at The Crofoot Ballroom, we talked dates and plans, and we set the date for Oct 16, 2015, in the ballroom. We finally reached our next level, a 1,100-1,200 cap venue. The pressure was on.
This year is looking to be insanely huge and will definitely blow all the other years out of the water. I will always remember my roots and all the people who helped make this such a success. I put in a lot of hard work, but I really owe this all to the friends and family who continuously supported me along the way. We did it! I don’t plan on slowing down anytime soon. There is no real limit to the growth of this event and I can’t wait to see where it goes.

This year’s event will be featuring acts by SycAmour, Famous Last Words, Boys of Fall, The Illustrator, Adventurer, The Banshee Pilot, The Worst Of, Wolfshark, and also the winner of the Putnam’s Halloween Battle of the Bands that we are hosting at Hatchy’s in Utica, MI on Sep 26, 2015. 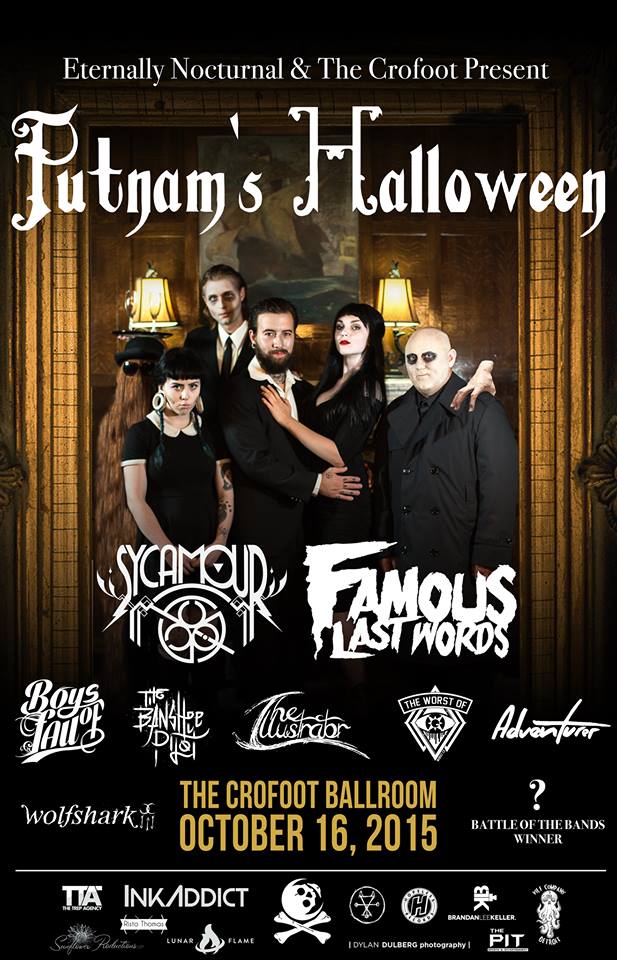