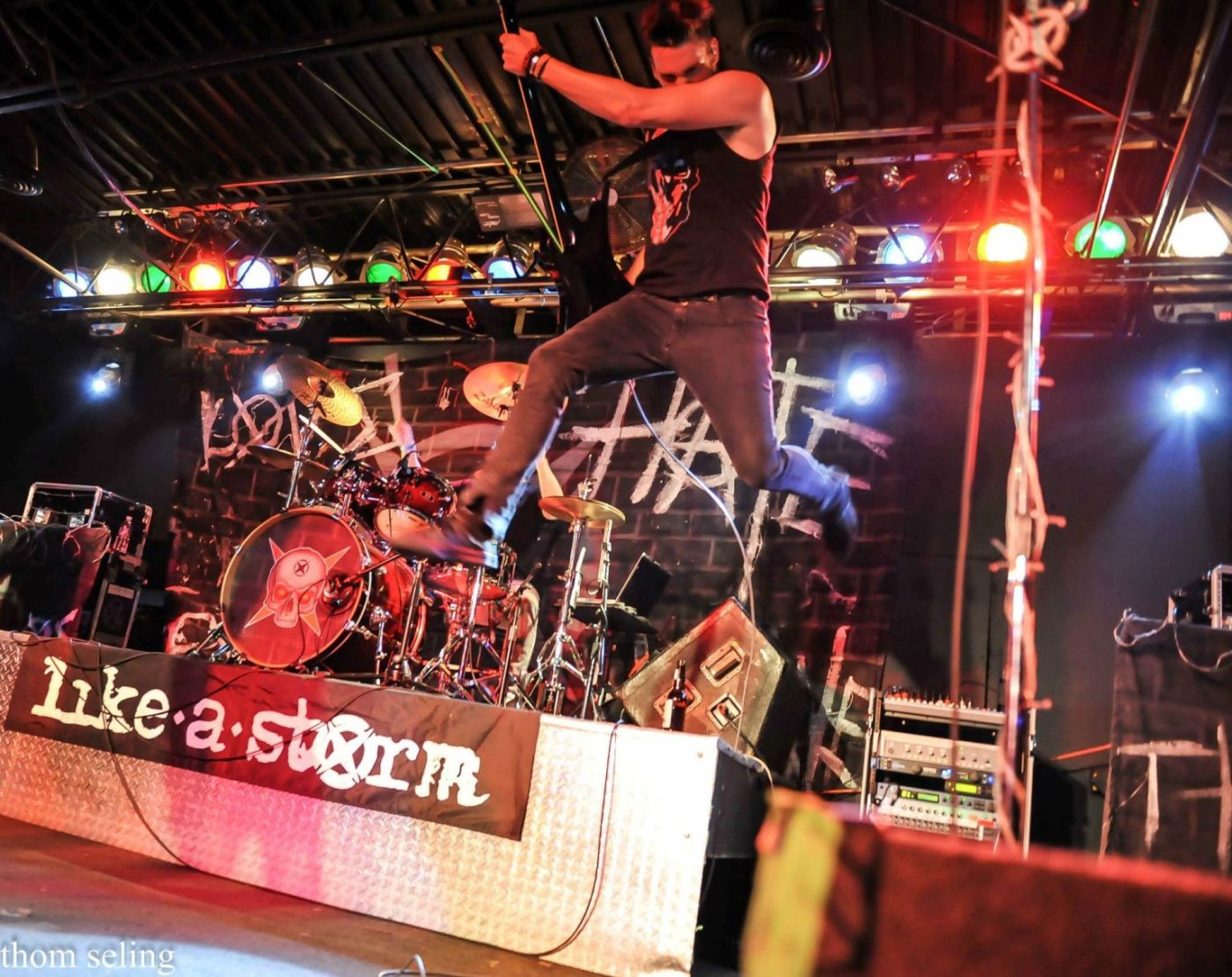 Like A Storm is a New Zealand hard rock band made up of brothers Chris, Matt and Kent Brooks. Originally, the brothers each played in their own separate bands. Writing songs and playing live shows became their passion. According to Matt, when they first jammed together, all three of them realized that they were on the same page and shared a great musical chemistry. They all had dreams of rock stardom, and at that point knew they had something special together.

Being brothers gives them a deep underlying connection, both musically and personally. The musician brothers moved to North America in 2005 to follow their dream of pursuing a career in music. They settled down in Vancouver, Canada, enlisted their drummer mate, Thomas Karanasos, and Like A Storm were born!

The name, Like A Storm, comes from a line of one of their earlier songs. According to Matt, they felt the name really captured the vibe of the band, and the kind of music that they love to play; larger than life, epic! The storm metaphor also speaks to the range of music that they play. From hard hitting rock to more melodic and atmospheric songs, a storm can be both aggressive and beautiful at the same time!

Being new to the club scene, the guys found themselves as an opening act for most shows. According to Chris, it was hard in the beginning. People were coming to shows to see the main act. Not the opening act. Most people would hang out at the bar and carry on with their conversations during their set. They needed to find a way to gain the audienceâ€™s attention. This is when they decided to open up their show with Chris playing the didgeridoo. For most, this was their first time experiencing the sound of the didgeridoo in person. People would stop, what they were doing, and gather around the stage to check them out. Like A Storm found their niche and, has since, incorporated the didgeridoo as a regular part of their band.

The didgeridoo is a wind instrument developed by Indigenous Australians of northern Australia around 1,500 years ago. It is sometimes described as a natural wooden trumpet or â€œdroneâ€ pipe. Musicologists classify it as a brass aerophone. A modern didgeridoo is usually cylindrical and can measure anywhere from 3 to 10 feet long. The didgeridoo has become popular in the experimental and avant-garde music scene. Industrial music band, Test Department, and acid jazz band, Jamiroquai, have had success using the didgeridoo however Like A Storm are the first band in their genre to incorporate it.

The guys soon found themselves as a club headliner. Kai Marcus, from Methods Of Mayhem and Econoline Crush, befriended them and introduced them to multi-platinum producer Mike Plotnikoff (My Chemical Romance/Buckcherry) who got them started on â€œThe End Of The Beginningâ€ album along with producer/composer Igor Khoroshev (best known for his work with Yes). After sixteen months of writing and recording, â€œThe End Of The Beginningâ€ was complete. With Mike Plotnikoff & Igor Khoroshev producing and mixing, the guys were able to create a perfect blend of big rock production with the organic sounds of the instruments and the raw emotion of the lyrics. Jeff Kwatinetz, of Prospect Park record company, took notice and signed a deal with the guys to release their debut album.

Mark Tremonti (Creed/Alter Bridge) offered Like A Storm the opening slot of Creedâ€™s 2009 reunion tour after hearing their album in the recording studio. Tremonti tapped the band again, in 2011, to support two tours opening for Alter Bridge.

Overwhelming fan response to the bandâ€™s live show saw â€œThe End Of The Beginningâ€ enter Billboardâ€™s New Artist Charts at No. 61 from tour sales alone. Like A Stormâ€™s first single, â€œChemical Infatuationâ€ reached No. 43 in the U.S. Active Rock Top 100. The band was also voted as Tunelabâ€™s â€œMost Fan Friendly Bandâ€ two years in a row, beating out
heavyweights Slash and Avenged Sevenfold!

In early 2011, the band recorded an acoustic EP, featuring acoustic and piano driven interpretations of some of their most popular songs. â€œLike A Storm Unpluggedâ€, produced and mixed by the Brooks brothers, showcases the band playing a wider range of instruments (including didgeridoo, piano, church organ and djembe).

In 2012, the band returned to their native New Zealand and recorded a live unplugged DVD titled â€œSouthern Skiesâ€. In the video, the brothers take the viewers to some landmark places and tell stories of growing up in Auckland, New Zealand, before playing acoustic versions of fan favorites. The band returned to the U.S. and toured in support of the Limited Edition Acoustic EP and Southern Skies DVD. On their off nights, the band set up private acoustic shows at homes of their fans. These private acoustic shows have proven successful, for the band, and have increased their â€œMost Fan Friendly Bandâ€ image. The band truly loves their fans, and in return, their fans truly love them! Shortly after their tour, the band announced that drummer Thomas, would no longer be playing in the band.

The brothers returned to the studio to record their sophomore effort when they were once again offered a nationwide tour with Creed. The Brooks brothers, refusing to let their hectic tour schedule delay their new record, decided to make their new album while touring the U.S. with Creed. This meant loading up two luggage carts full of recording equipment every night and requesting rooms far away from other hotel guests! Along with new drummer, Roye Robley, the bandâ€™s second album, â€œChaos Theory: Pt. 1â€ was recorded in hotel rooms, dressing rooms, and studios all across the country.

Following the 2012 Creed tour, the band booked their first headline club run. The â€œUnleash The Chaosâ€ tour proved to be a huge success, where they played their first Detroit area headline gig at the Token Lounge in Westland, MI. The bandâ€™s loyal fan base responded by selling out venues nationwide, and their first television appearance on Virginiaâ€™s â€œHampton Road Showâ€ brought the show their highest ratings ever.

Not taking a break, the band went back out on the road with their â€œAdrenaline Intoxicationâ€ tour. During this time, the band released a double live CD set that was recorded on opposite sides of the globe. The first disc, recorded live on the 2012 Creed tour, showcases the bandâ€™s high energy rock set, while the second disc features acoustic songs recorded in the Brooks brothersâ€™ native New Zealand. This tour brought them to Flint, MI, where they headlined the Machine Shop for the very first time!

The band went back into the studio to start recording the â€œChaos Theory: Pt. 2â€ album while waiting to head back out on their 2013 â€œLove The Way You Hate Meâ€ U.S. Fall Tour. Drummer, Roye Robley, left the band due to personal reasons. Garrett Whitlock (Submersed/Tremonti) took over on drums so that the band could continue with their rigorous tour schedule. This tour brought them back to the Machine Shop for their second headline gig. Most recently, the band has broken the record for most consecutive wins on Flint Rock Radio Banana 101.5â€™s â€œCockfightâ€ with their newest single â€œLove The Way You Hate Meâ€. According to Sarge (Banana 101.5 radio D.J.) Like A Storm now holds the all-time record as champ in the Cockfight. And, as kings of the Cockfight, they figure itâ€™s time to retire them until someone else can attain as many wins to challenge them for that crown! Sirius Radio has picked up the song and it has been placed in regular rotation on their Octane station.

Like A Storm are an exciting band to see live. They put on a big rock show. On stage, they are energetic, entertaining and larger than life! They have toured the U.S. extensively and shared stages with Creed, Alter Bridge, Shinedown, Puddle Of Mudd, Staind, Drowning Pool, Helmet, Skillet, Hoobastank, Korn, Five Finger Death Punch, Three Days Grace, Sick Puppies and many others, as well as playing the Rock On The Range, Rocklahoma, Jinx Fest, Summerfest, Cornfest and Common Ground festivals.

For those of you who missed out on seeing them at the Machine Shop, the band will be swinging thru the area for a second stop on their â€œLove The Way You Hate Meâ€ tour. They will be playing the Token Lounge on Saturday December 21st, along with The Crash Dollz, Black Market Rebellion and New Day Revolution. Doors are at 7pm. The Token Lounge is located at: 28949 Joy Road, Westland, MI 48150. Their phone number is 734-513-5030. Donâ€™t miss out. This may be your last chance to see Like A Storm for a while, let alone, in a small club setting!