Riki Rachtman and Lea Vendetta spent most of 2018 on a motorcycle. Together they rode more than 14,000 miles on a cross-country journey was part of the 5th Annual RikisRide, founded by Riki Rachtman as a vehicle to fundraise for deserving charities.

Most know Riki Rachtman from his rock n’ roll career in radio and TV, most notably as the host of MTV’s Headbangers Ball. Riki has also always had a passion for riding motorcycles, which he combines with an immense desire to support deserving charities during his annual RikisRide. In five years he has ridden solo from Mexico to Canada twice, traveled coast-to-coast 11 times and, during RikisRide2017, accomplished the feat of riding through all 48 contiguous states.

For a number of reasons, Riki has decided 2018 is the final year of RikisRide and decided to bring a partner on the road with him, inviting none other than Lea Vendetta. The award-winning French tattoo artist, model, media personality and entrepreneur is notable for being featured on season one of Spike TV’s Inkmaster. Prior to RikisRide, Lea had never been on the back of a motorcycle but never left the back seat of Riki’s classic Indian Motorcycle across 14,000 miles and practically every American state.

Social media was a prominent part of RikisRide18 with fans and followers suggesting stops along the route that led to some very unpredictable moments caught on video then posted to Facebook and Instagram. Among the highlights: Meeting up with the Foo Fighters at Chicago’s Wrigley Field, being surrounded by buffalo in South Dakota and searching for ghosts at “The Shining’s” famous Stanley Hotel in Colorado.

The charitable mission of RikisRide18 was to support the charitable organization Stop Soldier Suicide, which aims to educate the public and provide an understanding about the crisis facing veterans. Every single day, 22 veterans commit suicide but with the help of organizations like Stop Soldier Suicide, there is help for service members and veterans in need. Riki made it his mission to raise $22,000 for the nonprofit organization through online donations and the sale of T-shirts and collectible mugs. In total, RikisRide18 raised in excess of $30,000 with every dollar given to charity (not one portion of the money raised was used towards expenses for the ride). 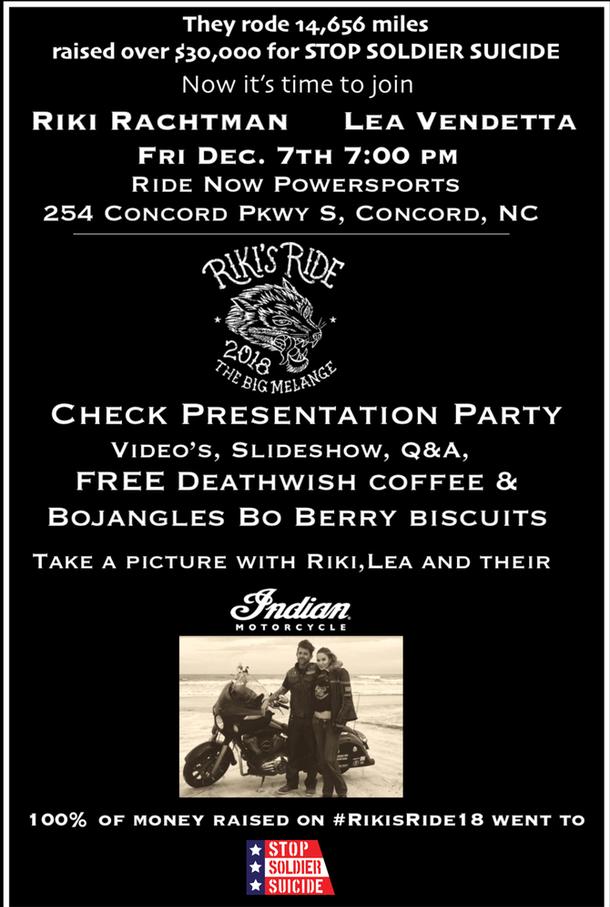 “On a ride in 2017, I was speaking to a man that had served in Afghanistan,” Riki explains. “He had told me the small group of men and women he served with all made it back home, but when he had reached out to them several months later, he had found out that two of them had taken their own lives. Soldier suicide was something I had not even heard of. I was floored and wanted to do something.”

Adds Lea, “The stops, particularly in Alabama, left a lasting impression on me. Hundreds of people showed up and many shared their experiences on how soldier suicide impacted their families. I had no idea this problem was as big as it is and is often ignored. I could not be more proud to be associated with RikisRide and Stop Solider Suicide.”

Deathwish Coffee served as a sponsor for RikisRide18. In addition to helping with some of the travel expenses the boutique roasters helped to arrange several meet and greets along the way, largely attended by fans as well as veterans and families of active military.

RikisRide17 and RikisRide18 were both completed on an Indian Motorcycle, American made since 1901.

Stop Soldier Suicide works one-on-one with troops, veterans and military families to help navigate services and programs available. They work to identify each individual’s specific needs, find the right resources to meet those needs and provide continued support and personalized case management for 24 months. Resources include: mental health services, particularly for PTSD and TBI referrals; emergency financial aid; housing assistance; alternative forms of therapy; retreats for military and their families; education and help with the GI Bill and much more.

A very special check presentation ceremony will take place on Friday, December 7 at RideNow Powersports in Concord, North Carolina at 7 pm. Attendees can meet Riki and Lea, as well as representatives with Stop Soldier Suicide. Photo ops and a special Q&A are planned as well as complimentary refreshments from sponsor Deathwish Coffee and Bojangles Biscuits. The event will also be streamed LIVE on RikisRide.com.