New album, Dirt Fest, and working with a great studio is a great hand for a band to hold. DTF is aces high then partner.

Lance Suttle (drums), Alex Suttle (guitar), Adam Liquia (bass), Mike Liquia (guitar), and Bryan Bivins (vocals) make up the Novi, Michigan five-some of Drawn To Fury (DTF). Having a recent EP drop in Words Break Bones, playing Dirt Fest 2015, and watching a certain someone crush watermelons with his thighs has certainly made this one year that’s hard to forget for the band. Alex was kind enough on short notice to sit down with us and dish on all of the above. Enjoy it as much as we did. 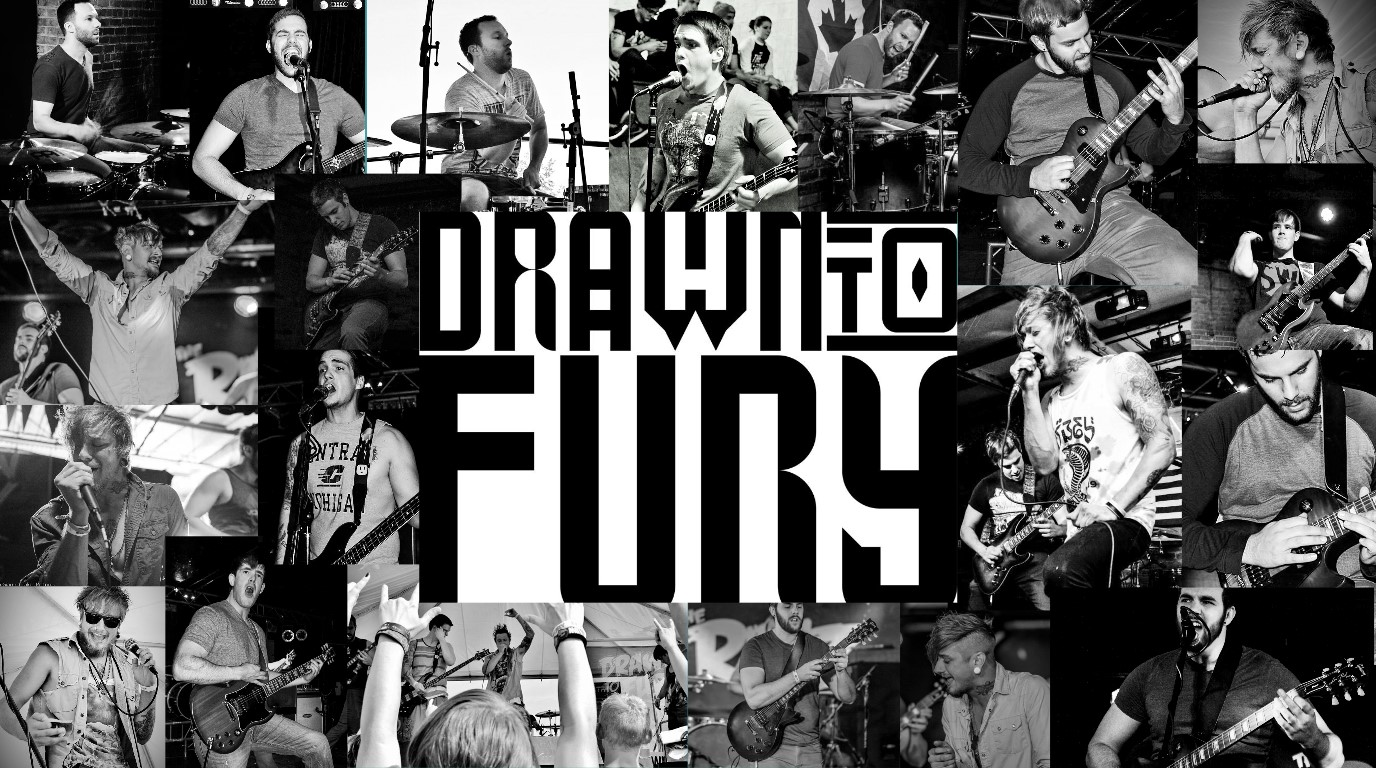 NRR: You guys are from the Novi, MI area and have a few new things dropping. What’s been going on with the band in the last year?
Alex Suttle: After releasing the Words Break Bones EP and our debut music video for â€œMoving Forwardâ€ we mostly focused playing shows with a strong emphasis on the mid-west music scene that we have all know and loved. This past year weâ€™ve began writing again and released our new single â€œConsequenceâ€ which gives listeners a taste of the new creative direction of the band.
NRR: Hopefully you guys have a great time on stage this year. Are you looking forward to anything in particular at Dirt Fest 2015 to keep the journey going?
Alex Suttle: We have always loved playing Dirt Fest and have always gotten a great responds at the show. Itâ€™s become an end of the summer party show to look forward to for our friends and fans. Every time weâ€™ve played in the past we always meet new people, make new friend, get to share the stage with lots of amazing artists which is what itâ€™s all about for us. This year should be better than ever with the full two-day lineup. Weâ€™ve got a whole list of great bands to check out some of which we will be seeing for the first time and as for our set we will be playing some new material that we are really excited about as well as some classics.
Drawn To Fury – Consequence (2015)

NRR: Tell me about the new EP, Words Break Bones. How did you decide to release “Consequenceâ€ first?
Alex Suttle: Words Break Bones was released awhile back and the songs reflected a lot of what was going on in our lives at the time. Each track was a collaborative effort between the five of us as is true with all of our songs. Over the past year weâ€™ve all grown as musicians and have really solidified the way that we collaborate. Songs seem to come to together much more naturally than they used to and our new single â€œConsequenceâ€ was a great way to express the new creative direction of the band. The song has been very well received by our fans so far and we are excited to perform it live at Dirt Fest!
NRR: How did the band come together and how did you guys settle on the Drawn To Fury name?
Alex Suttle: The band is really just a group of brothers and life-long friends. Drummer Lance Suttle and Guitarist Alex Suttle are brothers as well as Bassist Adam Liquia and Guitarist Mike Liquia. Our singer Bryan Bivins is someone that we all grew up with and have played in multiple projects with throughout the years.
The name Drawn To Fury came from discussions about the concepts the band writes about as well a bunch of other name ideas that got thrown out. Basically being â€œdrawn to furyâ€ is the moment that you are so outraged, angry, excited, or passionate towards a situation that you cannot ignore it and longer and have to take some short of action. We try our best to capture that emotion in our songs. It wasnâ€™t until after deciding on the name that we realized the abbreviation was DTF which ended up catching on with the fans. 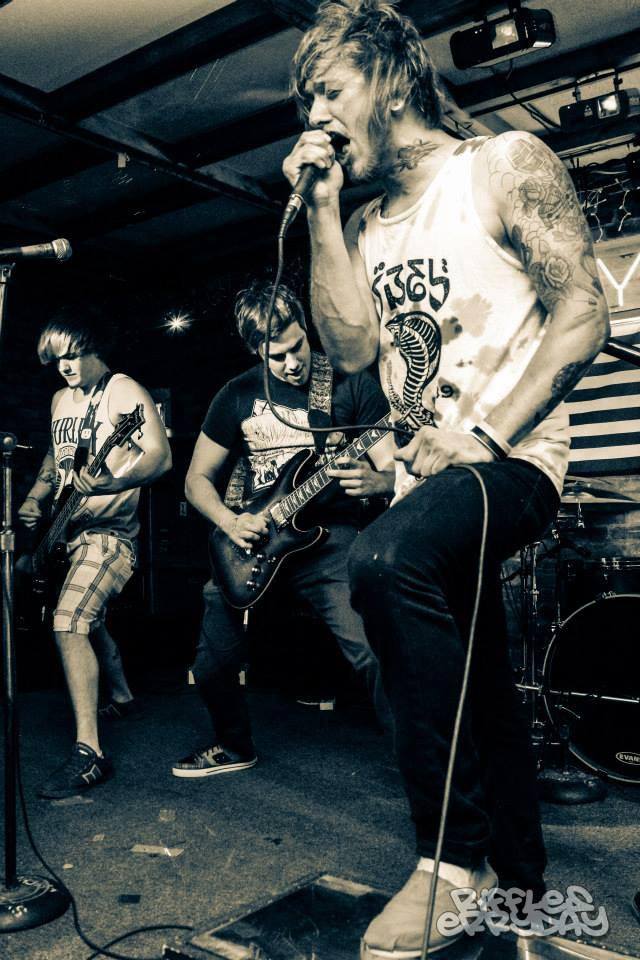 NRR: What can we expect from the Drawn To Fury camp in the coming days after Dirt Fest is a dream of a hellbent, metal succubus again until 2016?
Alex Suttle: We plan to continue playing shows, writing, and doing what we love. Weâ€™ve got a couple of exciting Michigan shows coming up including Loyalty Fest 6 at The Loving Touch in Ferndale MI.
NRR: Is there a band or bands on this year’s Dirt Fest line-up that you are looking forward to seeing as fans?
Alex Suttle: Absolutely! Part of what we love about playing festival shows is all the great bands we get to see. Down, Mushroomhead, Kottonmouth Kings and all the head liners from out of town as well as Michigan-based artists like Taproot, King 810, It Lies Within, Wolfshark, Kaleido, Heartsick, Psychostic and so many more! Some we have seen and played shows with before and some we will have the pleasure of seeing live for the first time.
NRR: How important is selling merch for you guys at a festival like this? Anything special, maybe even vinyl copies of a new EP, planned for the Dirt Fest 2015 faithful?
Alex Suttle: We are always most excited about meeting and talking to new people at the merch booth regardless of if they buy anything or not so we encourage anyone and everyone to come say hi and chat with us if you see us at the show. For that reason we usually try to have some type of printed material that we can give away for free. We will have physical copies of the EP for the people like us who still like to hold the music in their hands and enjoy the artwork.
NRR: For anyone that might not have heard your music before, what can they expect to get from your sound on stage being self described as a Rock band?
Alex Suttle: For us being at a Rock show whether youâ€™re performing or in the crowd is all about having as much fun as you possibly can. Itâ€™s about forgetting all the stresses of daily life, letting loose, and rocking out. Thatâ€™s the attitude we bring to our live performance. We put on an extremely high energy show from start to finish and do everything we can to capture the emotion of our songs on the stage. If youâ€™re seeing us first time we promise to do everything in our power to make your night even more awesome and create an experience you wonâ€™t forget.
NRR: What was the experience like working with 37 Metro Studies on your new EP? Did you see any egregious amounts of pizza and or strippers in the compound to entice you to record there?
Alex Suttle: We got a chance to work with Matt Dalton at 37 Studios for the first time while recording the new single â€œConsequenceâ€. It was a great experienced and Matt was able to capture a lot of the raw energy heard at a live show on this track which is the real challenge when recording rock music. We couldnâ€™t have been happier with the outcome! We were also very entertained by the pizza, strippers, and Matt Dalton crushing watermelons with his thighs.