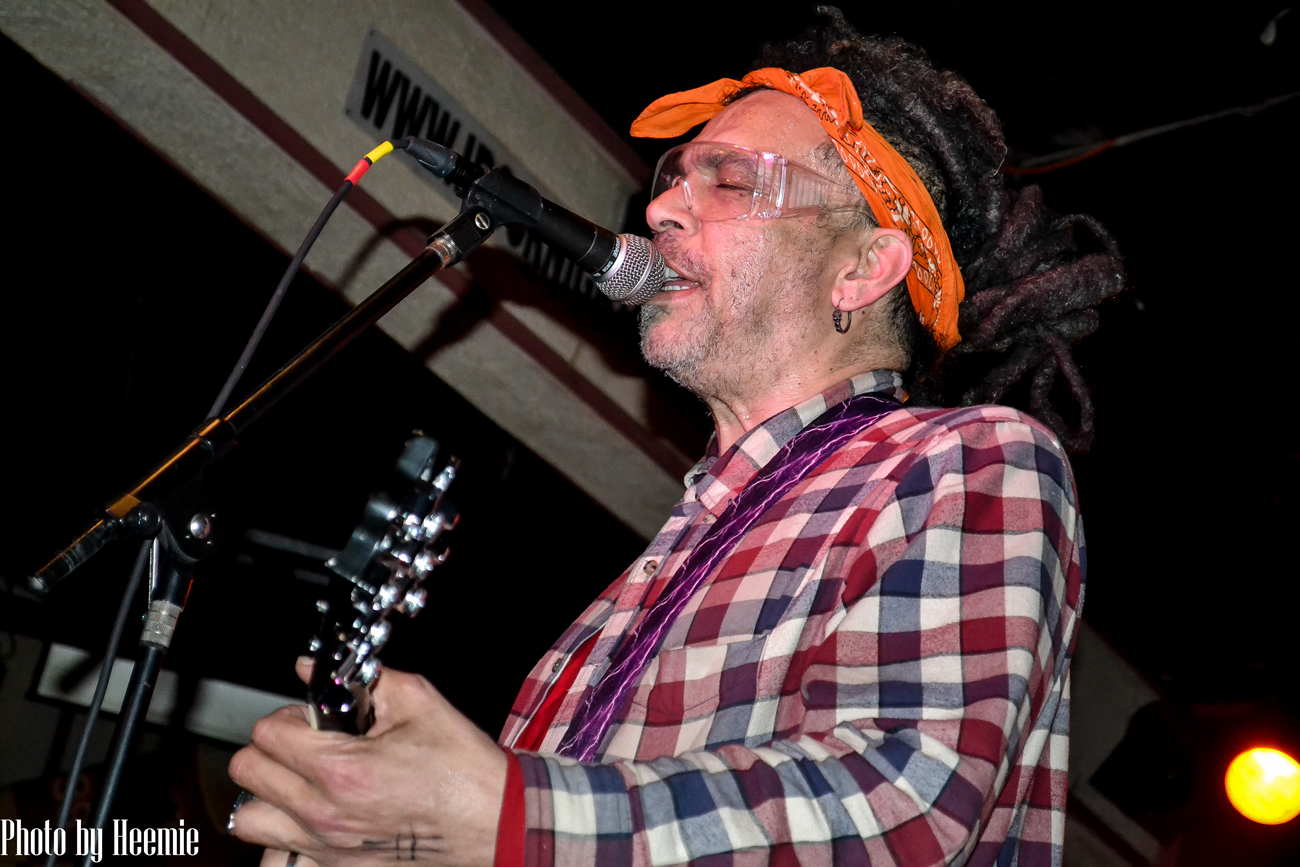 The I-Rock has been host to many great bands. March 15th, 2014 was no different when Chuck Mosley and the V.U.A. wrapped up their 2014 Spring Tour here in Detroit, Michigan.

I had the pleasure of sitting down with Mosley to ask him a few questions before the band hit the stage.

EH: One thing that I noticed on Will Rap Over Hard Rock For Food is that there is a very eclectic mix of song styles almost giving the album a cinematic concept feel. Was this intentional?

CM: No. Some of those songs we wrote together just jamming and stuff and some of them I had from a long time ago. Like, Bob Forest, I wrote that one around â€™82 and I just never put it on a record until now. I like all kinds of music. Thatâ€™s how I grew up. Iâ€™m eclectic because Iâ€™m black and white and Jewish and American Indian so Iâ€™ve always liked all kinds of styles. I wouldnâ€™t feel right with myself if I didnâ€™t play all of the stuff that I liked.

EH: How has the tour been?

CM: The shows that happened were awesome. Downtown Brown has helped me out for the last four days backing me up while my band got their shit together to meet me out here for this last show. Itâ€™s been good but it can be better. Next time, it will be better. Itâ€™s been great overall. Iâ€™ve loved every minute of it with my old ass body traveling on a greyhound bus for 24 hours to the next show. Iâ€™ve met some really cool people, some really nice people and a lot of people have really helped me out.

***To help explain Mosley’s previous comment; Mosley had some difficulties with this tour. Three days before the tour was to start, the guys in V.U.A. called Mosley and wanted to cancel five of the ten shows. The band members explained to Mosley that they didn’t feel they would “break even” on this tour due to the cost of renting a van plus there were a few 1-3 day breaks between some of the shows. The band only wanted to play the first two shows and the last three shows.

Mosley took a Greyhound Bus to St. Louis, MO where The Mercs played as his backup band that night. The next night’s show in Springfield, MO was cancelled due to the venue having been shut down for owing back taxes. He then took another Greyhound Bus to Emporia, KS where Alice Sweet Alice acted as his backup band that night. Mosley injured his back so he took a bus home to Cleveland, OH for a short break.

The tour was supposed to pick back up in Little Rock, AR however there was a discrepancy in how much the venue promised to pay Mosley from what they were now saying that they would pay him, so Mosley was forced to cancel the show.

Mosley met up with Downtown Brown (the support act for the second half of the tour). Downtown Brown played as his backup band for the rest of the tour up until the Detroit date where Mosley’s band met back up with him.***

EH: Is this your first time to Detroit or to the I-Rock?

CM: No. We were here about ten years ago. (Mosley points to a V.U.A. sticker he placed on the wall last time they were here!)

EH: When does this tour end?

CM: Tonight is our last show. We are going to go home then try to come out a bit then go back home then come back out for a bit. Not stay out for months at a time but break it up into little increments. We are hoping to hit the east coast in a month or so.

EH: Do you have new material that you are working on?

CM: We have some new stuff. We just need to find the time to practice and work it all out as a band. I hope to take this current line-up into the studio with me when it comes time to do so.

EH: Is music a full-time job for you?

CM: Right this second it is but when I get home it will be back to part-time for a bit. I will have to get on-line and do a bunch of groundwork on the new stuff and touring so it pretty much will be a full-time job. Iâ€™m going to give it another shot before I throw my towel in the ring.

EH: Are your kids following your footsteps into music?

CM: No. They like their own music. We like a lot of the same stuff but then they like stuff that I donâ€™t like and I like stuff that they donâ€™t like. My oldest daughter, her first few concerts were Shonen Knife, Devo and Sinead Oâ€™Connor so sheâ€™s really eclectic like me. The other is more into R&B and hip hop.

EH: How do they feel about you being one of the founders of the rap/rock movement?

CM: Ha, ha. They couldnâ€™t care less except for once every couple of months when a royalty check comes. Thatâ€™s when they like it. Thatâ€™s when I buy their love (Mosley chuckles as he tells me this).

EH: Back in 2010, you made a surprise appearance on stage with Faith No More. Do you still keep in touch with those guys?

CM: Yeah. We went down to Chile last July and Billy (Gould) was down there with his band The Talking Book. Seeing his band play inspired us to do a few Faith No More songs. He came and joined us on stage each night for one song. So, yeah, we all talk. With Billy, we talk on-line. Roddy (Bottum) is godfather to my oldest daughter. There was a little rough patch right after they fired me but now weâ€™re all good.

EH: You spent a couple years singing for Bad Brains. Do you still keep in touch with them?

CM: They are hard to get hold of. A few years ago, they played a couple of shows in Cleveland and Detroit. They had us come open up for them. I actually lost their number and have been trying to get in touch with them. So, Dr. Know or Darryl (Jenifer), if youâ€™re out there, look me up on Facebook and Iâ€™ll do likewise.

EH: Any plans following this last night of your tour?

CM: We are driving straight home. Iâ€™m going to then start working on some more tour dates and hopefully work out some studio time. I have some unreleased songs I wrote with Cement that I would like to re-record with this band and possibly some of the songs I did with Bad Brains. We (Bad Brains) recorded some stuff but it was never released so Iâ€™d like to try and re-do those songs too.

EH: Thanks for your time Chuck. It was a pleasure meeting you.

Chuck Mosley and the V.U.A. took the stage without hesitation. They put their foot down and took control. On this night, the I-Rock belonged to them.

“I was immediately impressed by the talent of this group of musicians.

Mosley has a pretty strong singing voice and can hold his own when it comes to duplicating his recorded material live. Instead of relying on his Faith No More era rap/rock singing, he mixes up his heavy rock singing with some poetic balladeering reminiscent of Leonard Cohen or Tom Waits. Oh, and he can play the guitar too!

Tim Parninâ€™s awe-inspiring guitar work mesmerized me. This guy can play! Watching him play is like watching Jimmy Page play. Parnin has the swagger of a 70â€™s rock guitar god and the talent to back it up.

Steve Mehlman was meant to play the drums. This guy can pound! He gets so into playing them that itâ€™s almost as if he is one with his drums. His style of drumming reminded me of Chuck Biscuits (D.O.A., Black Flag, Danzig) as they are both masters of the entire drum set. To him, it seems, drumming is a religion.

Steve Rauckhorst rocks on the bass guitar. His bass lines are a key part of making the bandâ€™s sound. He provides a solid rock hard foundation for Parninâ€™s guitar to splash all over. Watching him play live kind of reminded me of Joe Lally (Fugazi) as Rauckhorst has the same confidence and boundless energy of Lally.

Although often overlooked, the I-Rock is a great place to see a band. This small venue allows you to get close to the band and enjoy an intimate sweaty rock â€˜n roll show!

Here the images I took of Chuck Mosley and the V.U.A.

Chuck Mosley and the V.U.A.: