NRR: The new release, Surface Tension, was produced and mixed by J. Hall, who also worked on your past releases. What is it that you found in working with the same producer that you wanted to have your first LP with him as well on the board?

Dave Raymond: â€œTogether we dream biggerâ€ is a quote of Jâ€™s that I love. It means finding a way to tear an idea wide open and find what potential is hiding within – the next building block. In that, J has always been new fuel to whatever flame we bring him. Bigger flames, bigger ideas.

Heâ€™s tasteful and sensitive to our aesthetic. Having been part of our story since the beginning, J has been largely responsible for helping us find the palette that we use. Each recording we push a little further, cast a larger net, then go home and create with our new ideas.

Our chemistry is unmatched too, which is paramount. Iâ€™ve heard horror stories of bands working on records with producers where their experience was degrading, tragic and caustic. Our experience with J has been the polar opposite of that. Even when we have friction, itâ€™s with purpose and gets worked through. In our experience recording with J, he has become a close friend and has my complete trust and confidence. No other producer has a place in this bandâ€™s story.

NRR: You came together from two older bands to form Hidden Hospitals. What happened to bring that about and how did you guys come to pick Hidden Hospitals for the band moniker?

Dave Raymond: Steve Downs (guitar) and I were in Damiera (Equal Vision Records) and Jared Karns (drums) was in Kiss Kiss (Eyeball Records). While auditioning Damiera for a bassist and drummer, we met both Jared and John Scott (bass). After we had Damiera formed (again) the thought of going so far backward just to move forward felt very wrong. Starting new felt freeing and was the right decision. So, we shed ourselves, found an identity, wrote five songs, recorded EP 001 with J. Hall and said hello to our small world in 2011.

The name Hidden Hospitals: â€œPlaces revealed to those seeking resuscitation, rejuvenation, decompression, atonement.â€ Unique to each, hidden to all. This could be your walk home from work, or that corner seat in a cafe where you read. The space behind your workplace where you take breaks, or the record you play to decompress. For me, today, it was the rain storm. Invisible, always present..

NRR: You are starting to make a name for yourselves outside of the Windy City. For those that don’t have the Chicago scene down, give me how you see your style and, what are the influences that gave you your musical vibe?

Influence is an awesome topic because itâ€™s never a direct translation. If I want to sound JUST like Muse, Iâ€™ll need to find an additive way of getting there. What ingredients go into sounding like Muse? â€œMuseâ€ as the only ingredient will yield a lesser result – like a designer knockoff. Bands you listen to and the music you absorb all become colors that get stirred into what youâ€™re painting with. The more diverse you let your listening to be, the more vast your palette becomes. My listening spans (largely) from hip-hop to R and B to soul to dream pop to electronica. Rarely does rock music wind up in my playlist – yet, Iâ€™m in a rock band and write rock songs. I think that distance is natural and necessary. Like coming home after being homesick, satiated with new experience.

NRR: Take a minute and go through how the band writes. Is it one person doing the lion’s share or does the process involve everyone from the very beginning?

Dave Raymond: I song-write everything for Hidden Hospitals. Thatâ€™s my role. I donâ€™t take an idea to the group until itâ€™s clear enough, hopefully, to speak for itself, which in a lot of cases is when the song is entirely written and arranged.

The very special thing about our group is that we found roles. Each member carries their role out well. In that, we know what is expected of us and what to depend on each other for. This wasnâ€™t planned, but has proved to be a stable foundation and chemistry.

NRR: Tell me about that new album. What on it is especially good to the point you’d point it out first thing to any new fans listening to it for the first time? What is the biggest difference between making an EP and LP that you’ve had to adjust to for this release? 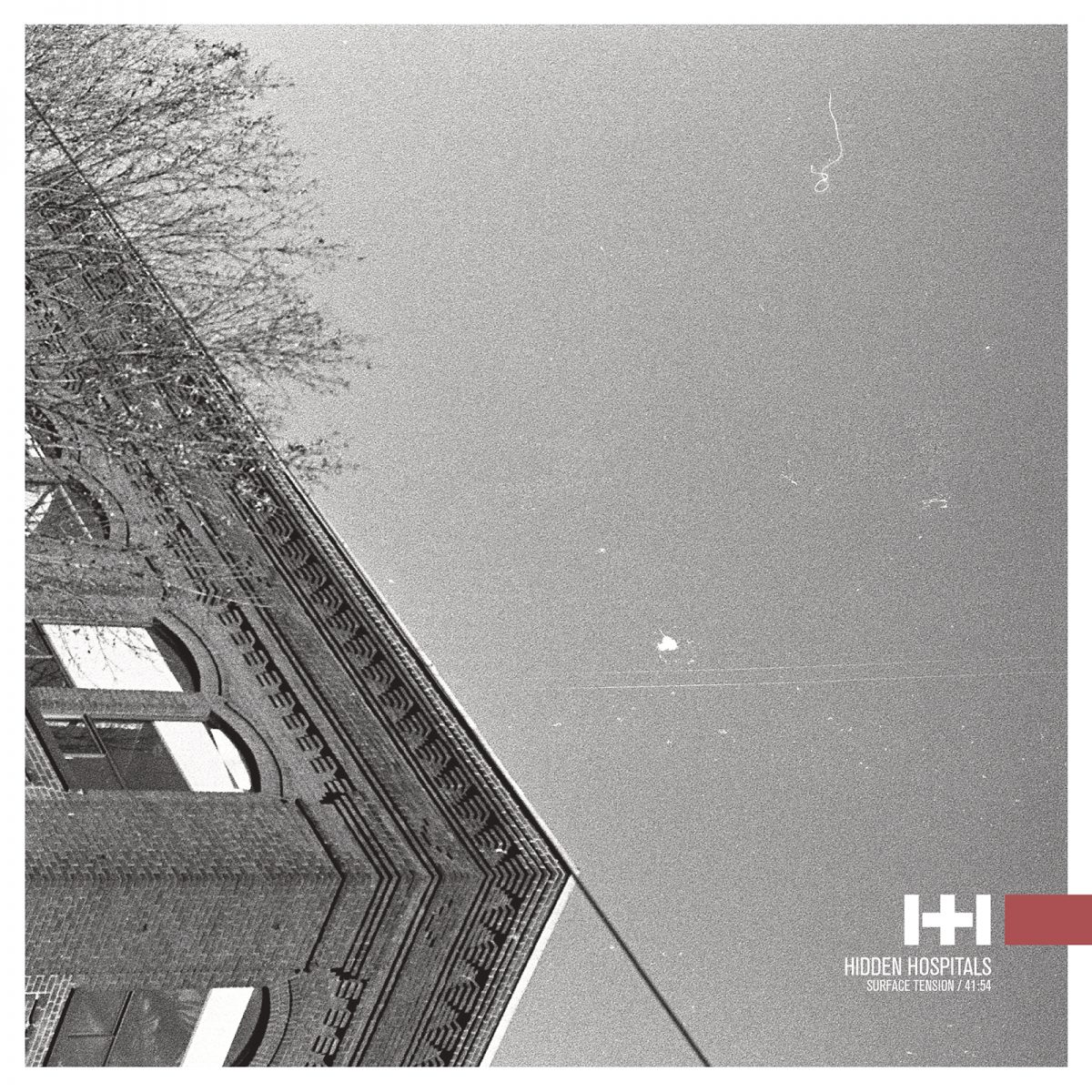 Dave Raymond: A full length affords you the canvas to paint wider ideas. EPs are such short, focused burstsâ€¦ there isnâ€™t enough time or space to play that much and Iâ€™ve always been left with so much unused material. Not that the 70+ songs I wrote for Surface Tension arenâ€™t just sitting on a dormant hard drive right now…but I mean, the music that naturally comes out that doesnâ€™t have a rightful place yet. Often atmospheric, electronic and brooding, experimental and demanding patience.With an LP, you can put some anchors down and swing between them with fringe ideas that compliment the main body of work.

Also, itâ€™s the first record Iâ€™ve written without a guitar. I get in my own way when I play guitar, so I opted to write the basic ideas and arrangements on a keyboard and add guitar later on. That alone feels like a big step forward. Letting the songs be songs first, then building skin around them. I have a practice of removing elements rather than adding them. Creating space for ideas to be themselves is an important part of Hidden Hospitalsâ€™ process and I think that Surface Tension showcases a lot of that contrast between less/more, empty/full, lonely/loved.

Lastly, this record is really us. Surface Tension isnâ€™t an extension of our previous bands, projects or songwriting. Itâ€™s modern rock music and itâ€™s us paying homage to the past while all together making something new.

NRR: You guys aren’t new to the road and touring. What band or artist would you drop everything for to see a tour with them happen and why?

Dave Raymond: Mew. Weâ€™ve always had a respect for them, but from afar. Theyâ€™re from Denmark and come here rarely. Steve and I had the opportunity to see them at Metro, and it was above and beyond our expectations. We would have been satisfied seeing them represent their records sonically, but they also delivered an entire visual experience that was so tastefully crafted that it was a show in and of its own. Every single detail was accounted for and elevated. I wonâ€™t spoil their show – anyone reading this should catch them this fall when theyâ€™re in the states. Just know that our very high standards were lit up while seeing Mew perform. Seeing performers fully convey that what theyâ€™re doing isnâ€™t a hobby or simply circumstantial is rare, sadly – and Mew blew holes through so many other bands weâ€™ve ever seen play live.

Thrice. If youâ€™d never seen them play live, itâ€™d be hard to gather what truly sets them apart. We believe that being on stage in front of people is an earned opportunity – a privilege. Peopleâ€™s time and attention is valuable, and they owe us none of it – so when we have their attention, weâ€™re thankful. Regardless of whether or not people like what they see/hear, just the simple gesture of a few moments to really consider what theyâ€™re seeing is huge. That is the highest respect that can be paid – and we donâ€™t minimize it. Iâ€™ve never met Thrice, but seeing them play live, they exude that same thankfulness and respect for the crowd. Theyâ€™re simply elevated from similar rock bands. I hope to be able to tell them in person one day the effect theyâ€™ve had on me since seeing them play at Metro. We were brought in by friends, Moving Mountains, and got to watch from side-stage. Close enough to see the details, yet far enough away to see the bigger picture. Thrice is a special band.

NRR: What has been the hardest lesson to learn firsthand for the band since you started?
Dave Raymond: Look[ing] ahead. The big picture goes out of focus when managing the details and a band has a lot of details. We try to meet often enough to just sit and communicate all things that are current, and in the near future. To align ourselves, and discover what traps might be lying in wait. Things sneak up on you. For example, having to produce the next record after spending 18 months writing it. Keep goals ahead of you, keep them realistic, and keep moving.
NRR: Every band will collect stories over the course of time and touring. Are there any Spinal Tap/hilarious moments that come to mind that you would share with a few thousand readers?

Dave Raymond: We (bands) always talk about tour stories – hilarious things that have happened to us, but theyâ€™re only hilarious because theyâ€™re out of context. In reality, itâ€™s all insane. Drive thousands of miles with thousands of dollars worth of gear, to play for no one and for no money, in the least ideal conditions, then only to crash for a few hours on borrowed floor space. Then, repeat. There isnâ€™t a daily life that compares to the life of band members on our level. But, add up all these years of doing it, sprinkle in some major milestones, and weâ€™ve got a pretty rich collection of memories. Shared experiences that amount to something larger than ourselves – reasons to believe.

Our group is very sarcastic and weâ€™ve come to communicate that way; a built in comic relief. Weâ€™ve found that there isnâ€™t room for sarcasm or dry humor in a lot of bandâ€™s dynamics. Weâ€™re often left catching stares of â€œare you serious?â€. No man.. weâ€™re not serious. Weâ€™re pretty much never serious.

NRR: Which would you rather have, one record that goes down with the Nevermind‘s and Appetite for Destruction‘s that are monumental releases and break up, or a long string of good records that only have moderate success but stay together as a band for many years and why?

Dave Raymond: I want whatever enables us to stay together, and to feel productive with milestones along the way. Enough that feels rewarding, but not so much that weâ€™re put in a position we cannot navigate. Our last band hit all three of our long-term goals almost immediately. We had no idea what to do after that because we hadnâ€™t planned for it. Things that seem simple just arenâ€™t, and thatâ€™s probably a good thing. For example, Iâ€™ve been working for months to get Hidden Hospitals considered for support on fall/winter tours, but to no avail. Hundreds, probably thousands, of emails written to the right people, then just crickets. So weâ€™re in a spot where weâ€™re playing our own shows out of necessity. Weâ€™re a band that needs to play live; like food for the body, without it, weâ€™ll likely die.

So, incremental growth. One brick at a time. Achievements that we can see and appreciate. Over time, added up, thatâ€™s a great life.

NRR: You get the dream letter from an adult beverage company wanting to sponsor you. What is the spirit of choice for the band?
Dave Raymond: Water is fine… but if a spirit, any from Buffalo Trace Distillery.