Prophets of Rage close a hugely successful Louder Than Life festival in Louisville, Kentucky with Incubus, Rise Against and many others.

Sunday is another picturesque day in Kentucky, complete with blue skies and white puffy clouds as Louisville’s largest rock festival, Louder Than Life takes over Champions Park for day 2 of bourbon, gourmet food and of course some of the biggest names in Rock.

Headliners Prophets of Rage are the very definition of a Supergroup with original Rage Against the Machine members bassist Tim Commerford, guitarist Tom Morello, and drummer Brad Wilk, along with two founding members of Public Enemy DJ Lord and rapper Chuck D, as well as Cypress Hill  rapper B-Real close out 2017’s Louder Than Life festival on a high note.

Numerous discussions throughout the day center around seeing Prophets of Rage and what songs they will perform. The energy is sky high as the festival lights drop and DJ Lord, B-Real, Tom Morello and the guys blast on stage dropping immediately into a Public Enemy cover of “Prophets Of Rage” that has the entire festival jumping. Over the next 90 minutes, Prophets of Rage cover all the Rage Against The Machine fan favorites including “Testify,” “Take the Power back,” “Bullet in The Head” and “Sleep Now in the Fire” with a relentless energy, the expected angst, and deep bass beats that took over.

In what can only be called a standout moment of the entire festival, Prophets dedicate their cover of Audioslave’s “Like a Stone” to Chris Cornell. In choosing to perform this well-loved song instrumentally, the crowd is given the opportunity to provide the vocals, which results in a massively moving tribute to this great singer.

Introducing Tim McIlrath & Zach Blair of Rise Against on stage, Prophets of Rage drop into an insane MC5 cover of “Kick Out The Jams” pushing the energy level to a new high. Unfortunately all good things must come to an end as Prophets of Rage close out their set and the Louder Then Life festival in overpowering fashion with a Cypress Hill cover of “How I Could Just Kill a Man” followed by Rage Against The Machine standouts “Bulls on Parade” and “Killing in the Name” putting a giant exclamation point on an awesome set and festival.

Providing the main support for the day are California based rockers, Incubus.  Touring in support of their most recent album 8, Incubus opens with a couple of new songs, “Glitterbomb” and “Nimble Bastard”. Over their 60-minute set fan favorites “Anna Molly,” “Love Hurts,” “Megalomaniac,” and “Drive” along with a cover of Pink Floyd’s “Wish You Were Here” are performed with Incubus’ usual flare and Brandon Boyd’s intensity.

On the Monster Energy Stage, hardcore rockers Rise Against leave everything they have on stage with a crazy set including fan favorites “Savior,” “Prayer of the Refugee,” “Re-Education,” and “The Good Left Undone”. Lead Singer Tim McIlrath is all over the stage, egging on the crowd for more energy and fittingly is out at the crowd barrier for “Give It All” as fans surge forward to get a high five or fist bump.

On a day featuring outrageous live music, there are many memorable performances.

As festival-goers arrive at the Zorn Stage to catch In This Moment’s performance, they are immediately drawn to the huge black widow and white curtain covering the stage front. With “Salvation” blaring from the overhead speaker’s, fog is billowing out from behind the stage curtain. In an instant, the curtain falls and In this Moment is positioned on stage. Lead singer Maria Brink, wearing a long black flowing gown with a huge gold headdress starts with “Blood” and the spectacle of an In This Moment live show begins. 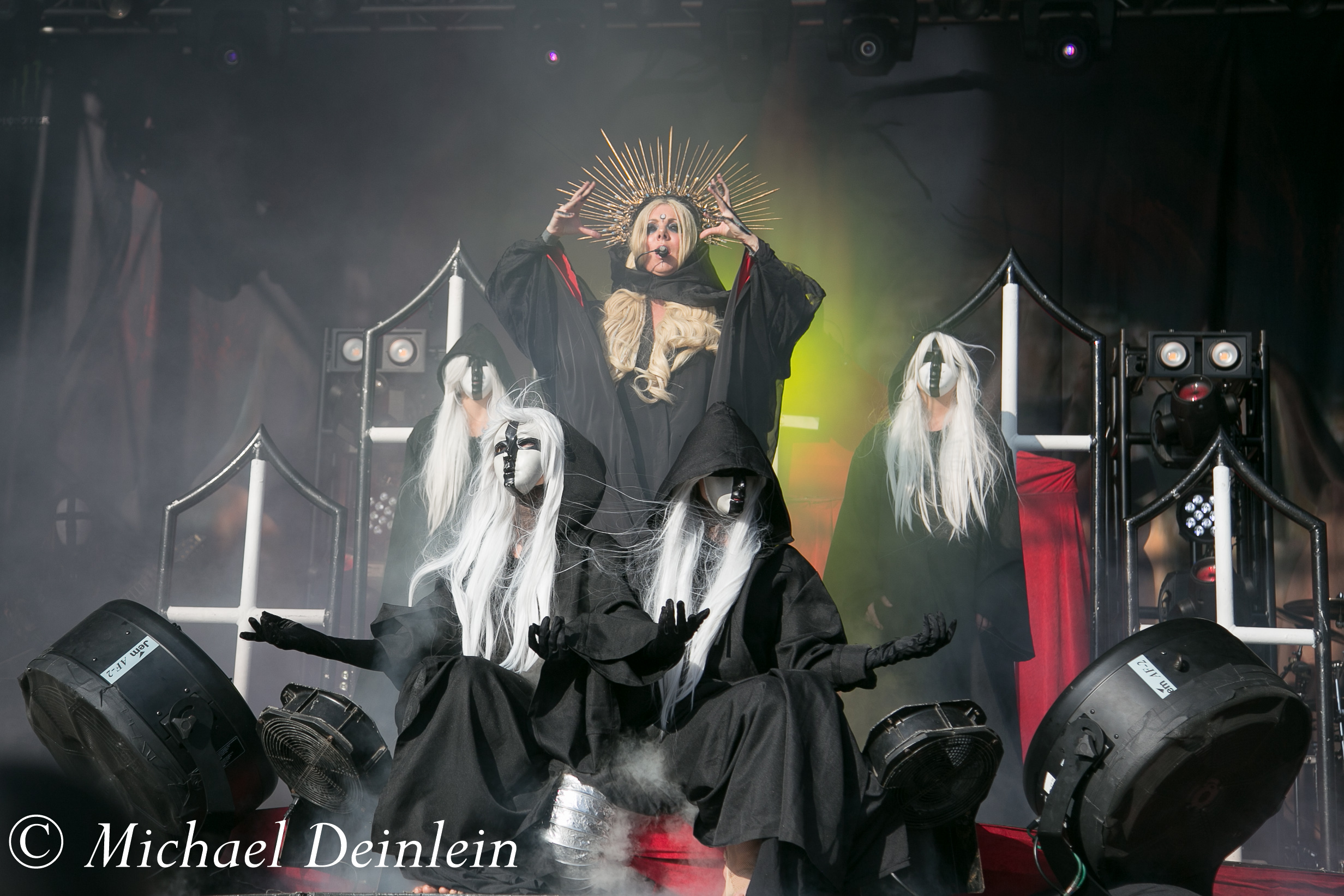 The incredible sensual bombardment continues as In this Moment perform “River of Fire and “Roots” before launching into the dark and sultry “Oh Lord”.  With a white pulpit now center stage two characters slowly march on stage with large “Shame” signs around their necks. Maria appears at the pulpit with a huge cone hat with “Whore” emblazoned on the front as In This Moment closes their much too short set with a dramatic flair.

At the very far end of the festival grounds, Italian gothic metal band, Lacuna Coil destroys the Zorn Stage with a wild, high energy set.  Touring in support of their most recent release Delirium, Lacuna Coil blast onto the stage dressed in white straight jackets spattered with blood and writing, creating an awesome visual effect, even in the middle of the day. Cristina Scabbia and Andrea Ferro are a commanding vocal duo and, along with the demonstrative bass work of Marco Coti Zelati, Ryan Blake Folden on drums and Diego Cavallotti shredding on guitar, deliver a high octane set, energizing the crowd lucky enough to take it all in.

Supporting their latest album, The Stories We Tell Ourselves, released just a few weeks before the Louder Than Life Festival,  Nothing More electrifies early afternoon festival goers. Cramming in as much as possible over their 35-minute set, Nothing More showcases a few songs from the new album, including “Let ‘em Burn” and “Go to War”, as well as fan favorite “Jenny” from their previous self-titled album. A wild Skrillex cover of “First of the Year (Equinox)” precedes “Salem (Burn the Witch)” which has Jonny Hawkins elevated high above the stage wailing away on their newest percussion apparatus, the Scorpions Tail, making for a dramatic ending to a fantastic set.

Earlier in the afternoon, hot newcomers, Greta Van Fleet, drew a large turnout to the Loudmouth Stage. Their sound draws you back in time with a distinctive Led Zeppelin flavor as the teenagers from Frankenmuth, Michigan perform from their EP, Black Smoke Rising Including radio favorite “Highway Tune” and “Safari Song”.

Day 2 marks the end of an another successful Louder Than Life weekend music festival.

Be sure to check out our coverage of Louder Than Life – Day 1, anchored by Ozzy Osbourne featuring Zakk Wylde, Five Finger Death Punch, and Rob Zombie, with support from Mastodon, Halestorm, Gojira, Steel Panther, Hollywood Undead and much more.