Welcome To Rockville 2014 well-organized and ran smooth; Dozens of bands and days of great music mean a great time for all who attended.

I have to start by saying I don’t usually do CD reviews, concert reviews, or anything that requires larger amounts of writing. I’m the interview guy for the most part at National Rock Review and I’m very happy with that. There are plenty of great journalists out there and I’ll leave all the major writing tasks to them. But when the opportunity came up for me to attend this years Welcome To Rockville in Jacksonville, Florida on April 26th and 27th, I jumped at the chance. Not only would I get to knock out a few interviews while I’m there, I would also get to check out the show… see how it’s set up, see how organized it was, how the day seemed to flow with all the different stages, the dozens of bands each day, and the overall experience of the event.

I’d like to get one thing out-of-the-way and say that this event ran SMOOTH. It was very well-organized, especially for the size of the area that it took up, and there were plenty of locations to get food, water, alcoholic beverages, and access to bathrooms. The park where the festival took place was right on the water and there were several scenic and shaded areas to hang between sets or for little breaks in the action during these two long eleven hour days. A big virtual high-five goes out to everyone involved with this festival for doing such a great job. I got to witness first hand why the event sells out and has been so successful these last few years. Being someone that’s been to many different music festivals and concerts over the years, it was refreshing to attend and cover such a well run event.

While I did have a great time and met some cool people, I also missed some bands due to spending time in the media area doing interviews and networking with some people. It comes with this kind of assignment and I knew this would be the case long in advance. That being said, I’d like to talk about the bands I did get to see and some of the highlights of the festival.

This years Welcome To Rockville kicked off on Saturday April 26th and, though I got a late start due to a flight delay, I still managed to get to the festival just in time to find the media tent and do the first scheduled interview. For day one of the festival, I got to catch sets from Smile Empty Soul, We Came As Romans, Memphis May Fire, Hellyeah, Alter Bridge, Volbeat, and Avenged Sevenfold.

Smile Empty Soul was energetic and entertaining as always, playing a good mix of some of their older and more popular songs as well as tracks from their new CD, Chemicals. Sean’s voice was strong and the band was tight. Great set from these guys and it was the perfect way to start the day, being they were the first band we got to see on day one.

Next up I caught sets from We Came As Romans and Memphis May Fire. Being from Detroit, I was very excited to see how We Came As Romans sounded lately; it’s been a few since I’ve seen them, and was curious how their set would go over with the Jacksonville crowd. Let’s just say they did not disappoint. Very high energy, in sync with the crowd, and a great live show to watch. They’ve come a long way pretty quick and they really seem to be finding their niche.

Memphis May Fire was also extremely energetic and in your face. This was my first time seeing the band and they were everything I’ve heard about them and more. Check out the band live when you get a chance and check out their latest CD, Unconditional. I got the chance to spend a few minutes interviewing drummer Jake Garland, please take a moment to listen to the interview (below).

Jake Garland from Memphis May Fire:

I was able to catch a few songs from Hellyeah and enjoyed some of the new stuff I heard. It’s funny to think back at how many people thought they were just going to be this ‘one album wonder’ or ‘limited time super group’. Their new stuff is heavier than ever and I really think they’re at a place now that’s perfect for them. I always enjoy watching Vinnie Paul and Tom Maxwell play. The crowd was into it as well giving full attention and singing along with some of the bands bigger hits.

I honestly enjoyed every band I was able to catch this first day, but two of my favorite sets of the night came from Alter Bridge and Volbeat. Alter Bridge is always such a great band to watch and to listen to. Myles Kennedy always sounds amazing, Mark Tremonti is one of my favorite guitar players, and Scott Phillips and Brian Marshall back it up with the prefect rhythm section to complete the band’s sound. It was good to hear a wide range of songs from them ranging from the latest album back to the prior three.

Next up it was time for Volbeat. Judging by the noise from the crowd as they were doing some basic sound checking, it was pretty clear there were a lot of people waiting to catch their set. They took the stage to thunderous roars and belted out song after song while the crowd sang along, pumped their fists, and bounced around in mosh pits throughout the set. As usual, a great live show once again from these guys.

The last band I got to catch on Saturday was the headliner, Avenged Sevenfold. Roughly 20,000 people swarmed around the main stage to witness the closing act of the day. I personally have never been to a bad show from A7X and this night was no exception. They played the hits, a bunch of new stuff, and had a blast with the crowd. Tight as ever and commanding attention, they rocked out their set and left their mark with the crowd. A few of the people we talked to after the show even went as far as to say the Avenged Sevenfold set alone was worth the cost of the days ticket. I think it’s safe to say mission accomplished for day one. 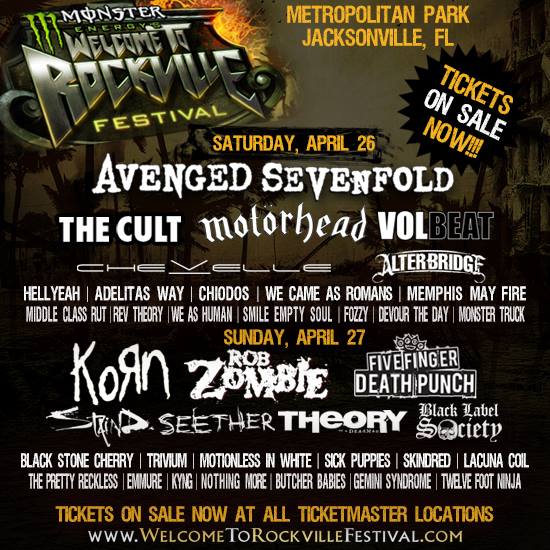 When I arrived on Sunday, it was much easier to get around being I knew the grounds better and didn’t have to deal with any problems or delays to start the day. Just as with Saturday, I had to miss some sets due to interviews and other happenings, but I still managed to catch some great performances from: Gemini Syndrome, Butcher Babies, Emmure, Motionless In White, Theory OfÂ  A Deadman, Five Finger Death Punch, and Rob Zombie. Sunday was even hotter than the prior day and the crowds packed in earlier for day two. I’d be willing to bet that the majority of the people coming out to the show on Sunday were there by 3-4pm. The grounds were jam-packed and the crowd was ready for the final day of this years Welcome To Rockville.

The first two sets I caught on Sunday were from Gemini Syndrome and The Butcher Babies. Gemini Syndrome just continues to amaze me with not only the quality of their live show but how fast they are gaining fans and attention. They jammed through their set and the crowd couldn’t seem to get enough. Another great show from the California based alternative hard rockers.

Next up were The Butcher Babies. These guys and gals are always a fun show to catch. All high energy and not to be overlooked just because the two lead singers happen to be extremely attractive females. To anyone who thinks they are just some pretty faces with nothing to back it up, go see a live show. They never disappoint and this day’s performance was no exception.

A bit later in the day I bounced around and caught a few songs of each set from Emmure, Motionless In White, and Theory Of A Deadman. Emmure produced as always, and Frankie Palmeri and the guys kept the crowds energy up while blasting through the few tracks I got to catch.

Motionless In White was on their game as masses of people started to head to the area to watch them perform. I missed them on The Mayhem Festival last year, so I was really glad I got to watch a few songs this time. I was very impressed with what I saw and Chris Cerull is a great front man.

Theory Of A Deadman also sounded good during their time onstage. The crowd loudly sang along with some of their funner songs and then bobbed their heads and raised there hands for the heavier stuff.

As day two was starting to wind down, Five Finger Death Punch took the stage as tens of thousands of people filled the area and all the smaller open areas around it. These guys really just keep getting better and their live shows get more fun to watch. They performed a nice mix of old songs, newer songs, and some of the covers they’ve been known to do. The energy from the crowd was intense and you could tell that the guys in the band we’re feeding off that. It was a sight to see. I got the chance to talk to Zoltan Bathory before their set that day; see the interview below.

My last band for day two of Welcome To Rockville was Rob Zombie. By this time every person that was on the festival grounds had surrounded that section for the performance. The usual horror props and costumes filled the stage and the set was a good one with songs from the last 20 years of Rob’s time in the music industry. The band rocked hard, the crowd kept demanding more, and the show was incredible. I don’t think I’ll ever get sick of seeing a Rob Zombie performance.

Overall, Welcome To Rockville was an incredible two days of live music, good food, vendor and merchandise displays, and good times with around 40,000 people who love the same things in life. I was both appreciative and honored to be asked to cover the event this year and I look forward to attending it again in the future. Two horns up for Rockville; I had a blast !