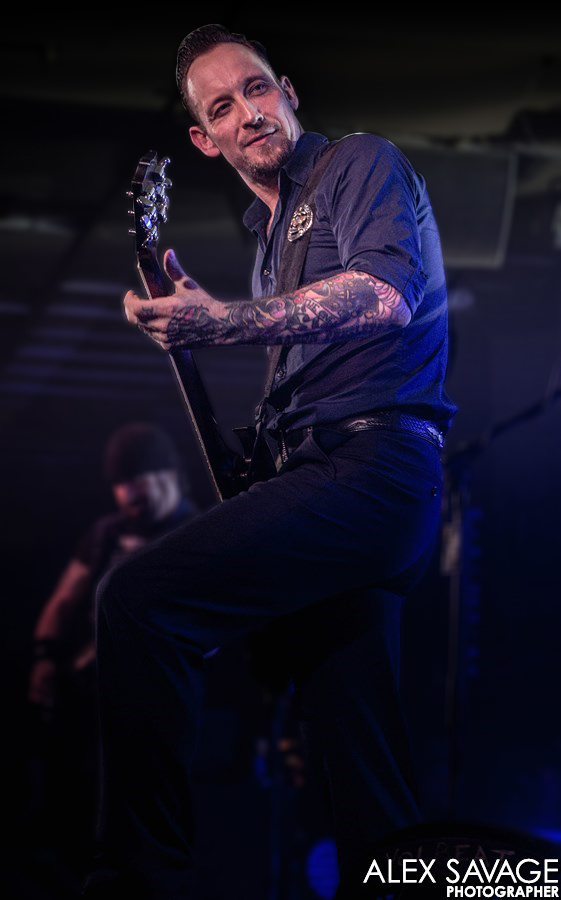 If you said that Volbeat was the hardest working band in rock these days, you just might be right. Perpetually touring in the USA and abroad, Volbeat hasn’t missed a beat as they’ve climbed the charts with their newest release, Outlaw Gentlemen and Shady Ladies.

The newest edition to the Denmark outfit is former Anthrax guitarist, Rob Caggiano. Some say his addition has changed Volbeat’s quintessential Johnny Cash meets Metallica sound into something altogether different, but the jury is still out. I’m hard pressed to see him sticking with the band for the long haul.

Still thrashing their rockabilly roots, Outlaw is quite different from their earlier releases, but this isn’t an album review… back to the show!

Volbeat invaded the sold out Piere’s Entertainment Center in Fort Wayne, Indiana for what might be their last time. The band is too big and too loud for the venue, they rocked the place to the ground in true Johnny Cash style! The band played their most beloved hits and had an extensive set list.

I had the chance to chat informally with lead vocalist, Michael Poulsen, after the show and asked him about his writing process and if he ever thought to have any acoustic songs on stage. Â He said they write songs with the intention of being hard-hitting and electric, but he has entertained the idea of adding something acoustic to their set list in the future. Â He also mentioned taking a break with the hopes of starting another album sometime in the near future, but as always an actual time frame was never discussed.

I’ve had the pleasure of talking to Michael before and he has always been very nice and straightforward. Maybe it’s just the Danish accent?!?Â  He could read a phone book and make it sound interesting and I’m also a sucker for Danish cinema. You’d have to be a stick in the mud not to have fun at a Volbeat gig regardless of how you really feel about their music. Â Catchy, hooky, crunchy, and loud… what’s not to love? Volbeat play to their fans. Having seen them play live nine times, they are nothing if not consistent with their energy, set list, and all around piss and vinegar.

Catch them in a town near you and if you miss them, chances are it won’t be long before they come around again.