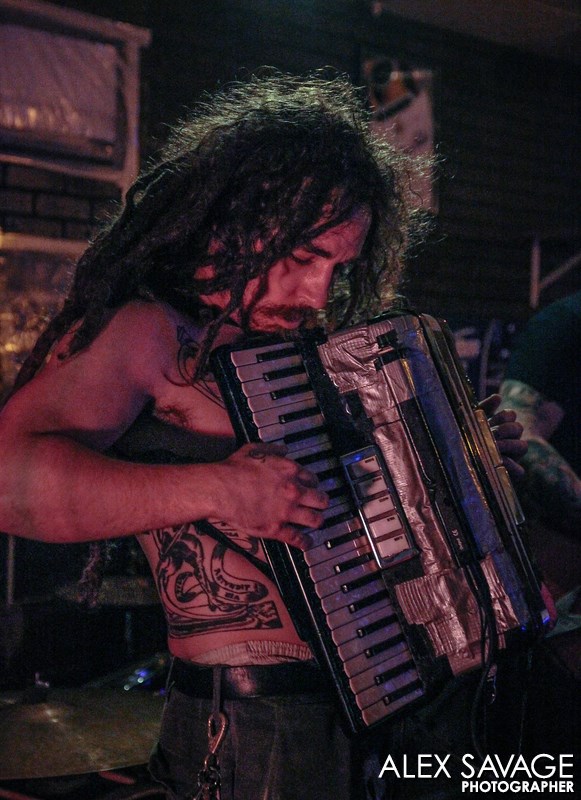 Every now and then, you come across a band that wouldn’t normally be your particular taste in music, but there’s something so genuine and raw about them, you can’t help but take notice. The Goddamn GallowsÂ makes it to the top of my list of newly discovered bands that aren’t usually the type of jams I listen to.

They have an old school, nostalgic sound; like they died in a tragic plane crash decades ago and are already legends. Every time I’ve put on their playlist in the midst of unsuspecting self-described music aficionados, they always stop and ask what they’re listening to, pull out some electronic device, write it down for future consumption, and are eventually sucked into the gypsy punk circus The Goddamn Gallows created.

Although some may throw them in the genre of ‘Gutterbilly’,Â The Goddamn Gallows have a little bit of everything, even for the hardest punk or metal fan. Â With the obligatory stand up bass, banjo, mandolin, and washboard sound, the band utilizes, you’d do yourself, and the band, a huge disservice if you bowed out now without wanting to know more. Don’t judge based on the arsenal of typical country style instruments they use. Â Take all those sounds, throw in a twisted, haunted, melancholy, carnival of music mixed with doom laden lyrics delivered by Mikey Classic.

Classic possesses a command of his voice of the likes I’ve never heard. From melodic crooning, gutteral growling, and punk wailing; you kind of get the sense that the band rose up out of some god-forsaken-hell-gate right in the middle of the French Quarter of New Orleans, far away from the usual influences of their Midwest roots in Detroit. What you get is a soup of gypsy punk that sounds low down and dirty with a noticeable apocalyptic horror. Â Don’t believe me? Â Look up a little tune called ‘Y’all Motherfuckers Need Jesus’ and tell me I’m wrong.

Resident stand-up speed bassist, Fishgutzzz, can hold his own with the best in the business with fingers flying faster than light while Baby Genius on drums is his own tour de force and is arguably certifiably insane. Â Throw in TV’s Avery on washboard with his animated vaudevillian antics and you have an explosive live show that has by far been one of the most entertaining I’ve seen in a long time.

The band is perpetually on tour and lives on the road, so be sure to find a gig near you and tip the gas money bucket. Available on iTunes, check out The Goddamn Gallows latest two releases in particular; ‘Ghost Of Th’ Rails’Â and ‘7 Devils’ on Farmageddon Records. Â The further back in their catalog you go, the more old school rockabilly they seem to be. But as the road got longer, things went in an entirely different direction while still keeping the purity of rockabilly perfectly intact. Personally, I like their the aforementioned releases the best.

Somewhere along the line, they came into their sound by going darker, deeper, and taking more genre risks giving them a distinct original and mystical sound that surpasses everyone else while gaining the respect they deserve among their contemporaries.

Singer, songwriter, and lead vocalist, Mikey Classic, enjoys playing solo gigs from time to time and recently released an acoustic solo album, Mikey Classic and His Lonesome Spur, which he recorded during his downtime from the band. The album features acoustic versions of Gallows’s previously released tracks with a raw, stripped down, one-man-band version of punk folk blues.

I had the pleasure of catching one of those gigs and, even though a bevvy of technical difficulties plagued the show, Mikey never wavered and gave the crowd his all, hung out like a champ after the gig, and was just pure fun to pal around with. Â You can catch Mikey Classic and His Lonesome Spur show at The Avenue in Lansing, Michigan on March 8th, 2014. You can also check out The Goddamn Gallows at the same venue on April 2nd, 2014 and at The Brass Rail in Fort Wayne, Indiana on April 3rd, 2014.

The Goddamn Gallows
Wander Inn in Mishawaka, Indiana in April 2013