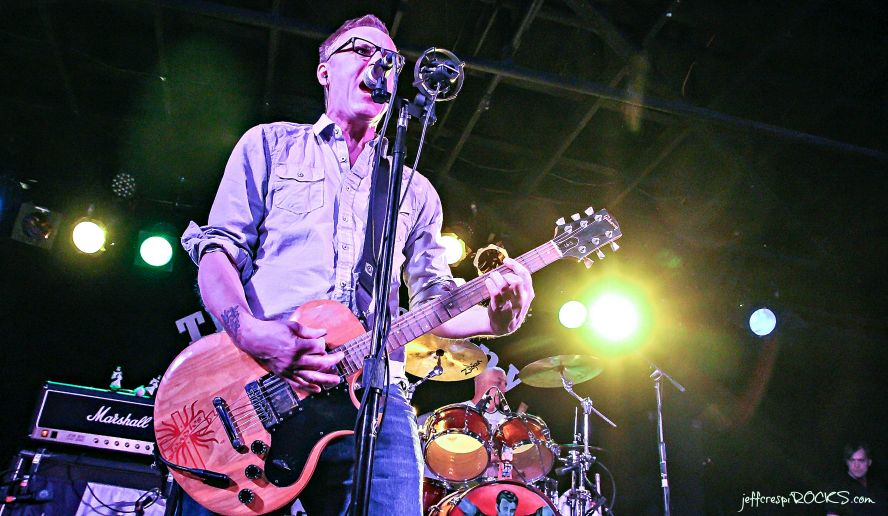 The Toadies brought their Rubberneck 20 Year Anniversary Tour to the Stone Pony on April 25th with special guest, the Supersuckers.

The Toadies began in 1989 in Fort Worth, Texas producing a few self-released cassettes and an E.P. before signing with Interscope Records. They released their first full-length, Rubberneck, in 1994 which scored a major radio hit, Possum Kingdom. They released a few other singles from that same album; Mister Love, Away, Tyler, Backslider, and I Come From the Water.

The Toadies toured extensively in support of Rubberneck before heading back into the studio in 1997 to record their follow-up album, Feeler. Interscope was not happy with the finished product and rejected its 1998 release. The band went back into the studio, salvaged some of the songs from the Feeler sessions, and released their second album, Hell Below/Stars Above, in 2001. The band toured in support of its release; however sales of the album were poor. The band broke up five months after the album’s release citing the main reason was due to Lisa Umbarger deciding to leave the band and felt they could not continue without her.

The Toadies reformed for a reunion show in 2006, which was intended to be a ‘one-off’ event. However, it reignited the band’s spark and they have played a number of concerts since.

Kirtland Records has reissued their classic Rubberneck album with unreleased bonus tracks, and the band has decided to play the album in its entirety on their current tour. The band’s current line-up consists of Vaden Todd Lewis (vocals, guitar), Mark Reznicek (drums), Clark Vogeler (guitar), and Doni Blair (bass).

The Supersuckers formed in 1988 in Tuscon, Arizona. They recorded numerous singles for various small labels before being signed to Sub Pop records. They also toured extensively throughout the 1990s and have continued to be a viable force as the self-proclaimed ‘Greatest Rock ‘n’ Roll Band in the World’.

Their singer, Eddie Spaghetti, has built a successful solo career during the band’s downtime and continues to tour with the Supersuckers and as a solo act. The band recently released their 2014 album, Get The Hell, on Acetate Records and are out on tour with the Toadies. Their current line-up consists of Eddie Spaghetti (lead vocals, bass), Dan ‘Thunder’ Bolton (guitar, vocals), ‘Metal’ Marty Chandler (guitar, vocals), and ‘Captain’ Chris Von Streicher (drums).

Our photographer, Jeff Crespi, was on hand to catch these bands in the act. Here are his images from that night.