Toseland makes a planned pit stop in the North East of England to close out their UK tour.

James Toseland, a twice World Superbike Champion turned rock star, has always had a strong connection with the Little Angels. Toseland opened for the band on a series of warm-up reunion shows in 2013, as well as having established a formidable writing partnership with Little Angels frontman Toby Jepson on the band’s first two albums.

Fast forward to 2016 and ex-Little Angels lead guitarist Bruce John Dickinson approached James Toseland about the possibility of his new band, Colour of Noise, supporting them on this UK tour. It is a humbling moment for Toseland offering him a chance to pay back the opportunity given to him back in the early days of his band.

Colour of Noise kick of the proceedings with a set which is anchored around their debut self-titled album. The room is packed, and it doesn’t take long before it gets hot and sweaty. Tracks like “Can’t Take It with You” sounds great with some nice thick guitar riffs, whilst “Hit Rock Bottom” has an almost AC/DC “It’s A Long Way To The Top” quality to it.

Dickinson struts about the stage with his trademark Gibson Les Paul, emblazoned with skull and crossbones motif and “Eat My Dust” moniker. He has a great chemistry with front man Matt Mitchell, they are indeed brothers in rock. The Brighton-based five piece close out their set with the epic “Heavy.” It’s very apparent that Colour of Noise has both the songs and the experience in the band to reach the dizzy heights they so deserve. This isn’t their last appearance of the night, but more about that later. 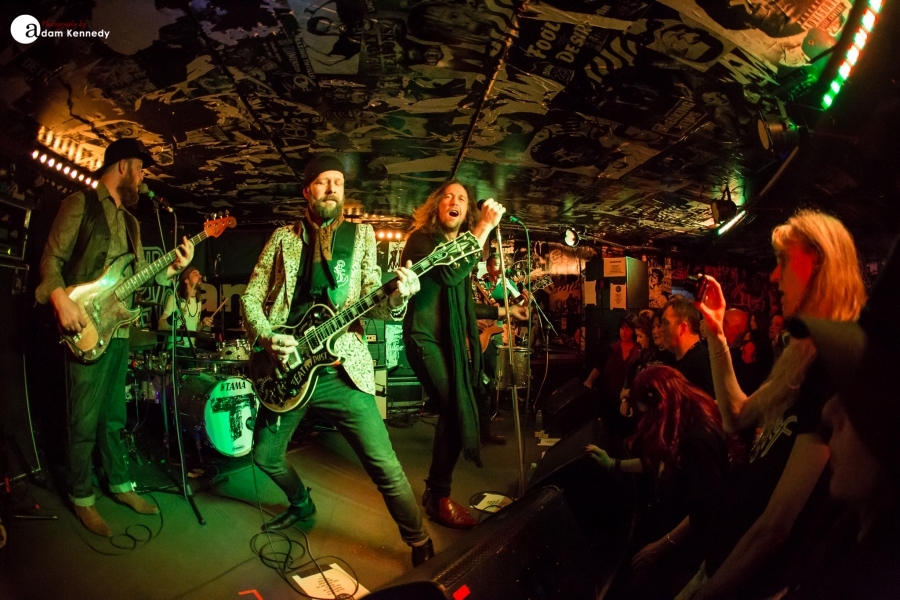 With James Toseland’s superbike days behind him, he swaps his trusty Yamaha motorbike for a keyboard of the same brand. Toseland’s latest album, Cradle of Rage, charted in the UK Top 40 and even reached No. 4 on the rock chart. The band are amassing quite a fanbase; James passes remark at how several of the front row tonight have been to every show of the tour.

Tonight the British five-piece are sounding tight. They deliver a superb set of melodic rock from the band’s first two albums. Hard rocking numbers like “Livin’ A Lie” and “Hearts and Bones” are interspersed with beautiful slower ballads like “Just No Way” and “Fingers Burned,” whereby James demonstrates his phenomenal keyboard skills.

Tracks like “Never Love Another” were built for radio and hopefully will get the airplay they deserve. Planet Rock has been supporting the band of late. Toseland closes out their main set with the superb “Singer In A Band.”

The band are up against an early curfew. Rather than doing the usual fake exit, they remain on stage and blast through their tongue in cheek poke at the music industry in the shape of their new single, “Puppet on a Chain,” whereby James exhibits an almost Myles Kennedy-esque quality to his singing. The band welcome their touring compatriots, Colour of Noise, back to the stage. They join the band for a jam through Aerosmith’s “Love In An Elevator.”

This band displays a formidable array of talent. Joining James on vocals is his brother-in-law Zurab Melua (guitar), Ed Bramford (guitar), Roger Davis (bass), and Joe Yoshida (drums), who each take their moment to shine during the epic “Renegade” from the band’s debut of the same name. The night comes to a close with the rather fitting, “We’ll Stop At Nothing.”

Toseland released their sophomore album, Cradle of Rage, earlier this month and there’s no danger of any second album syndrome here. Toseland’s latest offering will inevitably propel the band onwards and upwards, which is reflected by the capacity crowd in attendance tonight at Think Tank in Newcastle.