After two long years, Captain Ivory are back with a love affair of blues based rock and roll called, No Vacancy.

From the opening sounds of hushed rain on a dark city street that breaks into reverb soaked guitars on the opening track of â€œBroken Light,â€ you know you are in for something special with the sophomore offering from Captain Ivory. Two years of touring and a move from Michigan to Nashville have been good to the band. No Vacancy finds this young band reaching new heights in their songwriting as well as performance.

As with the first self-titled album, the music on No Vacancy combines a deep respect for the blues with elements of classic rock in a modern incarnation. The difference lies in richly layer songs that offer new facets of sound with each listen. This album is perfectly mixed with vocals and instruments balanced and well defined. Listen with headphones and let the music blow you away with the sweeping dynamics found throughout this recording.

Each song offers its unique story to tell and exhibits exceptional craftsmanship, yet there are some that stand out. The guitar solo by Robbie Bolog on the title track â€œNo Vacancyâ€ makes a great song even better with it tremendous emotional impact. The wailing guitar makes for a strong counterpoint to the mysterious melodies. 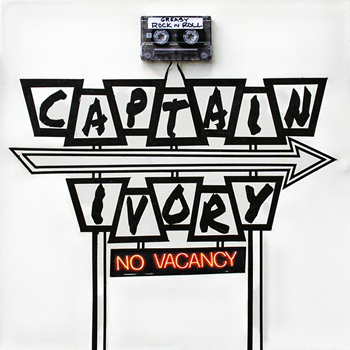 â€œCascades of Spainâ€ is an elegant and beautiful song. This song casts a dreamy spell with chorus rich guitar sounds washing over dazzling drum lines created by Seth Maschari. The song arrangement and performance are reminiscent of The Doves particularly in the chorus where the guitars use octaves to give the listener a sense of flying. There is also this effect that reminds me of a rotating speaker, which further compels the audience to think of the sound of the sea.

The grand piano intro by Steve Zwilling on â€œPaper Townsâ€ sets you up for softness and then the band kicks into a heavy riff with aggressive guitars that make this song kick. As on the entire album, Jayson Traverâ€™s vocals are outstanding with whiskey soaked grit and soul. The bass lines by Brett Smith give a pleasant pop to â€œHello Love, Goodbye Fearâ€ with the icing on the cake being the guitar solo by Robbie Bolog. He goes from a Django Reinhardt-inspired run to a triumphant cry of joy and glory.

In Captain Ivory, we have an incredibly talented young band that have created a captivating and evocative work of art with No Vacancy. This album reaffirms that great songs performed with passion and talent will keep rock music alive and well. You can pick up a copy of this fantastic album for yourself on April 13. In the meantime, National Rock Review has an exclusive stream of the new album for you to enjoy.