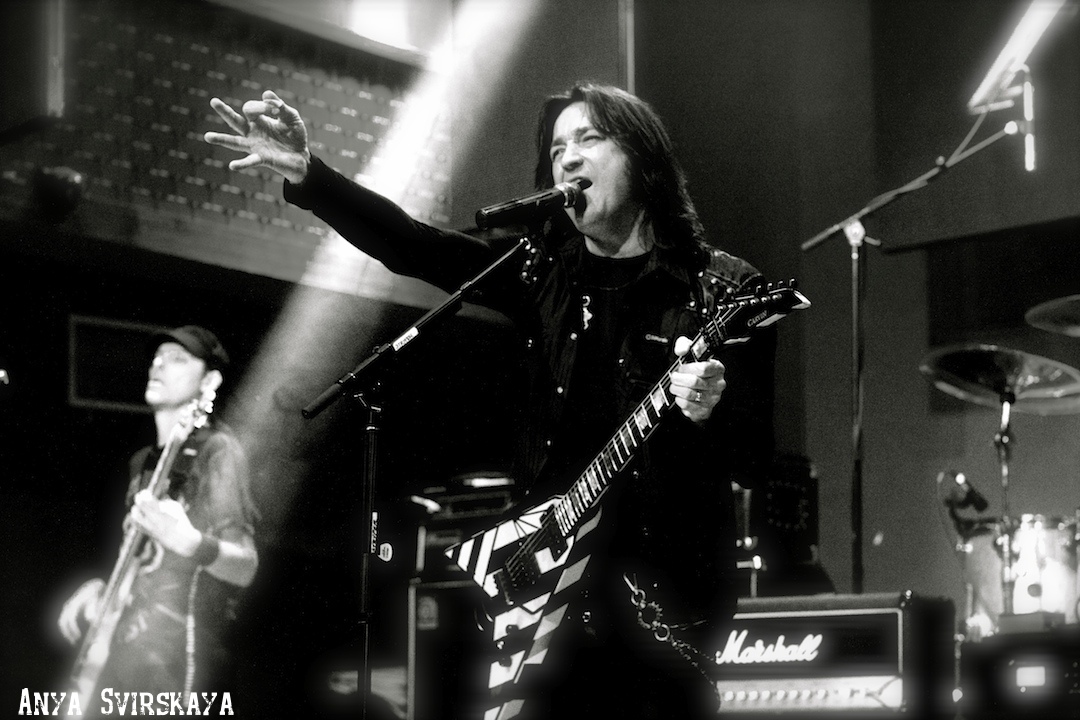 One of the best things about living in New York is there are so many good hard rock/metal concerts to go to. It has been a great month for shows so far. We had Iced Earth headline the Best Buy Theater in Times Square yesterday and tonight the Metal Alliance Tour (Behemoth, 1349, GoatWhore) invades Irving Plaza.  Not to mention we have Nile, Pagan Fest, Sebastian Bach, Corrosion of Conformity, and a few others coming up in the last two weeks of the month.

Last Saturday night was no different.  Stryper headlined Stage 48, a venue that has hosted many hard rock/metal concerts, in both the local and national markets.

When I arrived, the venue was packed already, including the upstairs balcony. As I made my way to the front of the stage, I chatted with a few fans and was pleasantly surprised to know that there were not only locals in the audience, but people who had traveled all the way from Europe and US fans who plan on seeing the band again as their tour progresses.

Stryper kicked off the set in their signature yellow and black gear, with Loud N Clear, the opening track from 1984’s Yellow AND Black. For the first eight songs or so the guys delved back into their 80’s catalogue and played hits like Calling On You, as well as three tracks from their current album No More Hell To Pay, including the title track of the same name, Legacy, and Marching Into Battle.

I was immediately blown away by Michael Sweet’s vocals; so powerful and full of raw emotion. His singing ability is so genuine, the listener can truly hear the message the song is trying to convey.  He did not miss a single note!

The entire band sounded great and what stood out for me were their vocal harmonies. Michael and Oz’s dual guitars were in synch at all times during the rhythm sections and even more impressively during the melodic solo parts. Tim Gaine’s bass playing was another highlight. He is a very talented musician and a true showman.

Robert Sweet’s drum playing was remarkable, but I was surprised he didn’t use the yellow and black drum kit I had often seen in photographs and live footage. However, that did not matter, as he brought his energetic and unique style of playing into his performance and at the end of the night that was the most important thing.

The crowd enjoyed every minute of their set.  Fans were singing along with every lyric and playing air guitar to every note.  Even in the balcony area I could see large crowds of people raising their hands in the air as the band played on.

Other highlights from the night included drummer Richard Christy (ex Iced Earth ), currently with The Howard Stern Show, playing ‘Sing-Along Song’ . The band also did a cover of KISS’ Shout It Out Loud. A personal highlight was the song Always There For You, from the In God We Trust Album.  This was the first Stryper song I’d heard when I discovered the band and I loved hearing it live.

At the end of the night, when the set was finished, and in classic Stryper fashion, they tossed Bibles into the crowd. I did not walk away with one unfortunately, but there is always the next show!

Stryper Set List:
Loud ‘N’ Clear
Reach Out
Calling On You
Free
More Than a Man
Legacy
No More Hell To Pay
Marching Into Battle
The Rock That Makes Me Roll
Sing- Along Song
Shout It Out Loud
All For One
Always There For You
The Way
Abyss
To Hell With The Devil
Soldiers Under  Command