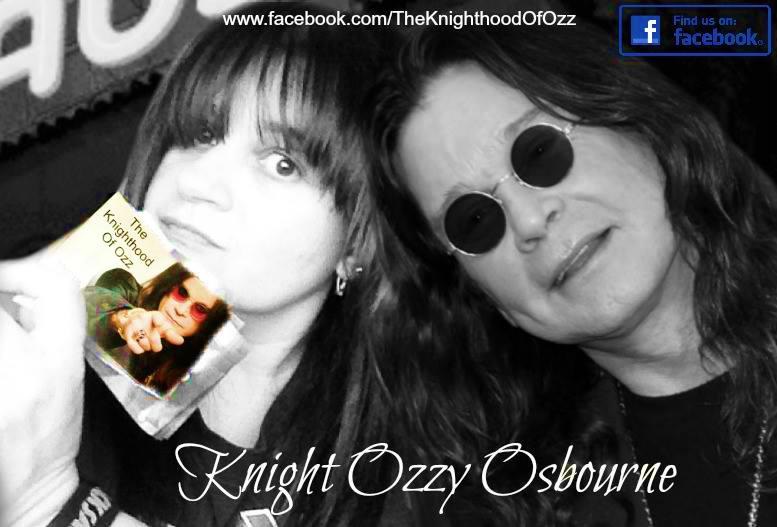 “Arise Sir John Michael Osbourne“, is what many are hoping to hear coming out of the walls of Buckingham Palace. The sole campaigner for Ozzy Osbourneâ€™s Knighthood Campaign is Helen Maidiotis. She is the mastermind of this campaign which she started via the online petition host, Causes.

Initially Helen thought to include all original members of Black Sabbath in her campaign. However, David Spooner (who is in charge of honours in the UK) told her that it would be highly unlikely the whole band would get a knighthood and that she would have a better chance with just one member of the band. Helen says she narrowed down her campaign to include only Ozzy because he ‘IS’ the voice of Black Sabbath.

Helen began petitioning for Ozzy Osbourne, frontman for Black Sabbath, to receive Knighthood after over 40 years of service to the music industry.

British honours are awarded on merit, for exceptional achievement or for service. Justifying her petition, Helen said: “Birmingham, England, born John Michael Osbourne has been entertaining and inspiring a great many throughout his life. He has been a huge success world-wide with many successful albums with both Black Sabbath as well as his solo career. Now, in his mid 60’s, I believe the time has come for him to receive a Knighthood.” She would like for everyone to consider signing her petition for she feels that this honour is well deserved and long over due.

Helen hails from Sydney, Australia, and is tireless in the pursuit of her goal of seeing Osbourne knighted. Helen operates her campaign 24-hours a day through the means of flyers, Facebook, Twitter, the Birmingham Mail, and the Causes.com web site. Even Kelly Osbourne agrees, saying on twitter recently â€œI think this really needs to happen!â€

Over time, Helen has garnered over 4,000 signatures, but she is up against a deadline of July 6th, 2014. This deadline falls two days after Black Sabbath returns to the UK to play their Hyde Park concert. With the hype building up to this event, the Knight Ozzy campaign may finally enjoy great success.

Success has not found its way to this campaignâ€™s doorstep easily, and small victories along the way have helped further the cause. There have been major obstacles in making this a reality, which are several. Osbourne is one of the most outlandish members of Black Sabbath and has endured many public relations disasters during his career (from bats to booze). Osbourne was fired from Black Sabbath in 1979, but later rose up from the ashes to build a very successful solo career.

Ozzy seems to catch every wind and rumor, and not to mention his family life which has been a series of difficulties. It seems that Ozzy has a hard time deciding between his titles as the ‘Prince of Darkness’ and being a normal family man, which may cause some of his erratic behavior. Osbourne continued with a reality show called The Osbournes, which displayed his crazy home life to a worldwide audience, something Ozzy has said he regrets doing.

Despite these things, one cannot deny that Ozzy is ‘THE’ face and voice of Black Sabbath. Ozzy has sold over 100 million albums worldwide as a solo artist and a member of Black Sabbath, and remains one of the most recognizable entertainers for more than 45 years.

Helen also stated in her petition that “Ozzy has been an inspiration to many great musicians over the last 40 years. He has taken a lot of young musicians under his wing along the way, from the late great Randy Rhoads to Zakk Wylde and many others. He is a credit to his country.”

Ozzy has accomplished much from the days of growing up in a solid working class family in post-war Birmingham to performing to sold out stadiums worldwide (countless times). He even entertained the Royal family on a few occasions, in which he had been invited by the Queen herself.

Ozzy has earned numerous awards. He is a member of the UK Music Hall of Fame and US Rock N Roll Hall of Fame. Now on the heels of a number one Black Sabbath album 13, and an extensive world-wide tour, the Ozzman is now once again chasing success and the spotlight seems to be shining on him once again. One cannot deny the many fans that Ozzy has and this campaign certainly is a peopleâ€™s movement to get Ozzy knighted.

Presently, with the upsurge of 1,000 signatures, from only six months ago, Helen has only one more obstacle blocking her hard work on the campaign. What is needed, now, are two letters of support for Ozzy, from his friends, telling the Cabinet Office how they know Ozzy and know of his work. So far, no one has put up his or her hand to do this very important task.

Now that time is almost up, Helen is hoping to get her petition up to 5,000 signatures. If you are interested in Helenâ€™s campaign and desire to help her gain this final surge, all you need to do is head over to the Causes Knight Ozzy page and sign.

Perhaps a large amount of signatures will finally make The Knighthood for Ozzy Osbourne Campaign a reality putting him within the elite group that includes Paul McCartney, David Bowie, and Elton John. The world just might hear, â€œArise to your knighthood, Sir John Michael Osbourne!â€