The Muggs have dished up a huge helping of hard-hitting rock and blues with their new release, Straight Up Boogaloo.

Straight Up Boogaloo is the fifth release from The Muggs. They have become a force in the Detroit rock scene with their blue-collar approach to creating music that latches on to your mind and fills your heart with sweet grooves. This new album delivers a well-rounded experience of the Muggs musical styles and showcases the superb talent of each band member.

Kicking off with “Applecart Blues,” the listener is treated to a fat dose of what drives the Muggs’ sound; rocking drums and bass. You can hear the drum heads smashing as drummer Todd Glass tears up his drum kit. The meaty bass lines of Tony DeNardo keep your ears pinned to the groove. With this rock-solid foundation, guitarist Danny Methric can cut loose with his high gain riffs. The swirling backward solo will surely make this one favorite. 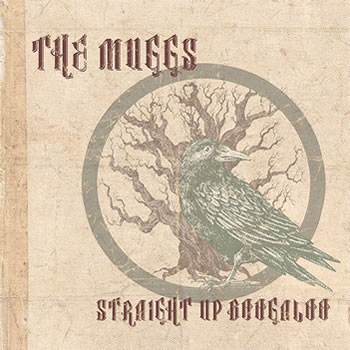 Other standouts on this release include “Fat City” with its catchy chorus and slippery hooks. There is a Beatles quality to the arrangement and performance, in particular, the vocals and harmonies. “Roger. Over And Out A” and “Roger. Over And Out B” are quite interesting. The first offers up a red-hot overdriven guitar with some psychedelic sound effects and a big crashing gong. The second has a trippy feel with an acoustic guitar reminiscent of Pink Floyd with some sort of film crew direction going on in the background.

The Muggs get back to the roots of rock with the deep “Blues for Mephistopheles.” Echoed and whispered background vocals give this delta blues an eerie haunted feel. The playing is perfectly subdued and loose.

The volume knob will automatically seek 12 when this cover of Black Sabbathâ€™s “Tomorrowâ€™s Dream” kicks into gear. Few bands can pull off compelling Sabbath covers. The Muggs make it sound effortless as they make this song their own.

The title track “Straight Up Boogaloo” is a straight blues shuffle that pays homage to the blues roots of the Muggs. Listen to the lyrics and you’ll get a feel for the artists that influenced this band.

The Muggs close out this great album with a couple of influential cover songs. They crank out a smoking version of Peter Green era Fleetwood Mac on “Rattlesnake Shake.” This tune feels very live as the band jams for close to 12 minutes on this rocker. The final tune is a cover of â€œYer Blueâ€ by the Beatles. The Muggs put their heavy stamp on this one with big overdriven guitars, crashing drums, and pounding bass.

Straight Up Boogaloo is a masterpiece full of rock energy that is deeply rooted in the blues. Make the most of your summer by cranking this bad boy up and letting the good times roll.