Grammy award winners Ghost make a “Black to the Future” tour stop in Louisville for the first time along with Pinkish Black.

Perhaps it was an omen of things to come; a massive lightning storm complete with window-rattling thunder rolled over the sold-out Mercury Ballroom just as Ghost was set to take the stage. Inside the venue, the stage resembles a church altar complete with a backdrop displaying stained glass windows and the smell of burning incense wafted through the air. The sounds of “Miserere Mei Deus,” a 17th-century piece composed by Gregorio Allegri, floats over the crowd as the anticipation in the room reached a fever pitch.

The intro tape plays “Masked Ball” by Jocelyn Pook as Ghost work their way to the stage. In an instant, the house lights come up, and the guys launch into their opening song, “From the Pinnacle to the Pit.” The venue responds with a huge roar of approval. Ghost follows with “Stand by Him,” “Con Clavi Con Dio,” and “Per Aspera Ad Inferi” kicking the show off to a dramatic start.

Papa Emeritus III takes a few minutes to talk with the crowd. He starts off discussing what he knows about Kentucky. He states that we have great fried chicken, and we like good bourbon, not that “sh*t from Tennessee,” which brings a huge applause.

Next, the Sisters of Sin are introduced (complete in nun outfits). As Papa Emeritus is condemning them to their place, he mentions that he has a task for them. The Sisters of Sin proceeded to give ‘Communion’ to those along the barricade as told us, “with all of the blasphemy going on tonight, the people in the front need to be sensible.” it was a fun and lighthearted exchange with Papa Emeritus and his fans. 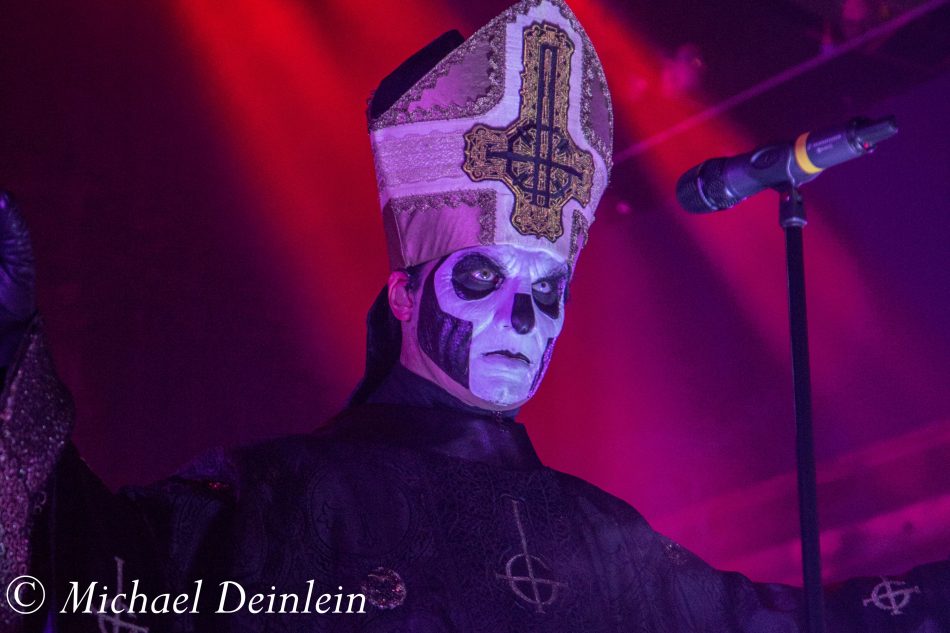 Fittingly, Ghost played “Body and Blood,” a song was about drinking blood. “Devil Church” follows and then the fan favorite, “Cirice,” which showcased the power and complexity of Ghost.

Their latest album, Meliora, received attention with a number of outstanding songs, including “SpÃ¶ksonat,” the dynamic and moving “He Is,” and “Absolution.”

Continuing Papa Emeritusâ€™s thread about what he knows about Kentucky, he said that we like some “heavy mother fucking stuff, so here is our heaviest fucking song.” Ghost rolls into “Mummy Dust” which sends the crowd crazy.

With just a couple of songs left in their main set Ghost, performs “Ghuleh/Zombie Queen” and closes with the powerful “Ritual” to a huge ovation from the room.

With Papa Emeritus III remaining on stage, he addresses the Louisville fans one last time. “In time you will learn that we do much better show endings, but since this is our first night together, we have one more song for you.” They close the show in their usual fashion, with a commanding performance of “Monstrance Clock” that finishes off a great evening with Ghost.

Ghostâ€™s live performance is theatrical, stunning, and visually stimulating. The evening was a fantastic success and a treat to all who were lucky to get a ticket to the first Louisville visit from Ghost.

The members of Ghost are Papa Emeritus III (Vocals), and The Nameless Ghouls: their true identities are closely held. The Ghouls each represent one of the five elements; fire, water, wind, earth, and ether. They wear their respective alchemical symbol on their instruments and have them embroidered on the right breast of their costumes.

Opening this evening was Fort Worth, Texas-based, Pinkish Black. The experimental music of Jon Teague (drums, synth) and Daron Beck (vocals, keyboard, synth) was well received and fit will with the evening.