As The Big Four were known for that unique sound they helped to create and make popular. Thrash now lives on from Seattle with Fallen Angels.

Fallen Angels is a five piece out of Seattle, WA. They are in no certain order: Steve Spitzbart (Drums), Erik Hanson (Guitars), Matt Be Roth (Guitars), Carl Larsson (Bass), and Bradzilla (Vocals). When Fallen In Decay drops Aug 4, 2015 from Cyberdyne Records, it will continue the road started by the band’s other two releases, 2010’s Engines of Oppression and 2008’s Rise from Ashes. 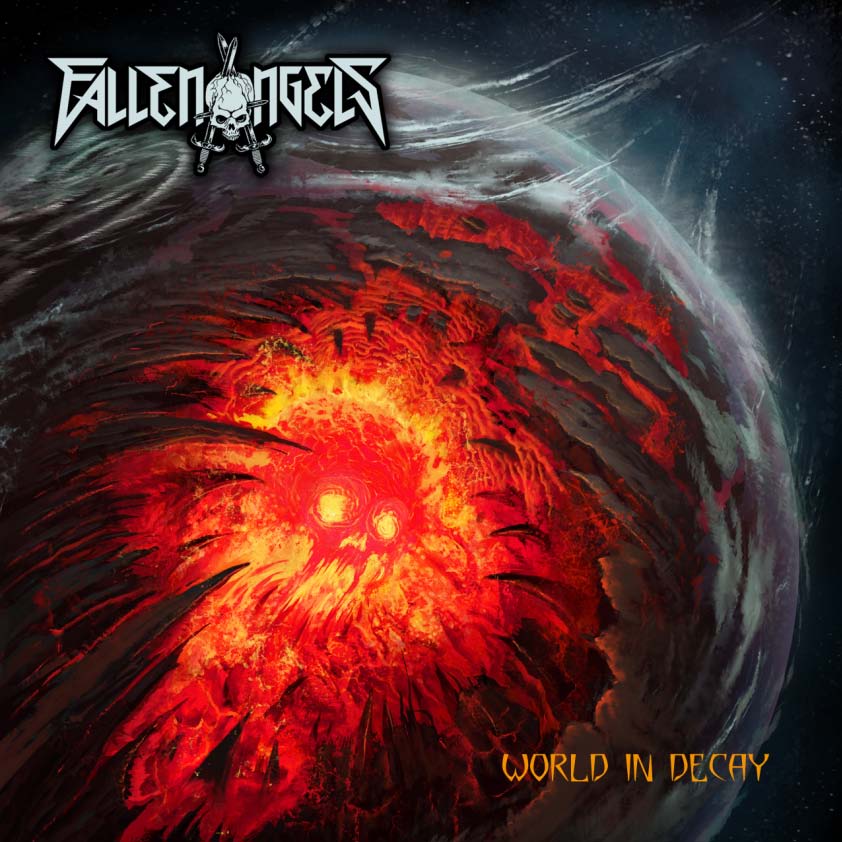 Tracklisting for World In Decay:

â€œWe are all fans of Thrash as much as we are a band. We live for this stuff. Youâ€™ll see us in the crowd at shows headbanging away as much as you see us thrashing onstage.â€ ~ Steve Spitzbart

The bands website states: “World in Decay was produced by none other than legendary Bay Area thrash metal producer Michael Rosen. Rosen has produced albums from Testament, Forbidden, Death Angel, and many others. The crisp sound matches perfectly the bandâ€™s old school, ferocious, but technical style. Speed, aggression, precision, melody, and the ever growing hunger to rise to the top, poise Fallen Angels to compete for the thrash metal throne. They are the powerful sound of new talent building on its illustrious foundations.” Pretty big words to describe the band, and they just might have enough in talent and raw power to pull it off.

“The Hour of the Time” is a throw back to the times when solo guitar riffs and melodic drum beats slowly built in pressure until the song burst into the vocalizations of apocalyptic warnings. Bands such as Exodus, Forbidden, Megadeth, and Testament can all be heard in the song as influences. “Nightmare Master” showcases Steve’s drums from the very beginning of the track. Bradzilla sings in a style that is his own, but sounds as if it could have been handed down from vocalists of thrashing past. The guitars harken back to when speed and accuracy were prized more then drop in’s and other post processing add-ons.

If you were in love with the Bay Area scene, check this album out when it hits. And if you are a fan of irony, thrash coming from Seattle should show you that grunge is the loser in the long run of lasting metal mayhem. If you snag a copy, we’d love to hear what you think about it.