This past weekend (9/9), Five Finger Death Punch and Breaking Benjamin wrapped the summer portion of the biggest North American outdoor amphitheater rock tour of 2018. The co-headliners chose to donate a portion of their ticket sales this summer to two charity organizations close to their hearts. 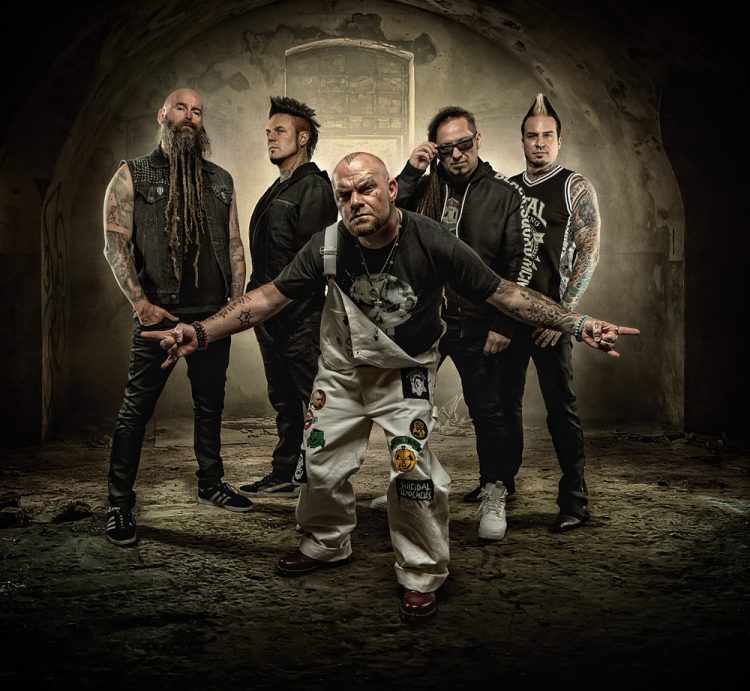 Five Finger Death Punch has donated $95,000 to C.O.P.S – Concerns Of Police Survivors; whose mission is rebuilding shattered lives of survivors and co-workers affected by line of duty deaths, through partnerships with law enforcement and the community. 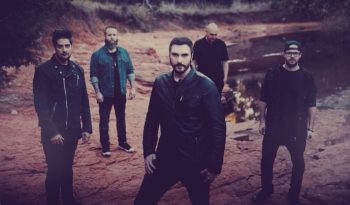 Breaking Benjamin has donated $95,000 to Prevent Child Abuse America; which counteracts the abuse and neglect of our nation’s children by promoting services that improve child well-being and developing programs that help to prevent all types of abuse and neglect.

“We’ve had the privilege to work with veteran and police organizations for years,” explains Zoltan Bathory of Five Finger Death Punch. “Today we are making this donation as a token of our respect and gratitude to those who committed to protect and serve, to those who signed up to bravely hold that thin blue line between ‘civilization as we know it’ and ‘lawless savagery and chaos’. Unfortunately, every 58 hours a police officer who believes in something sacrifices everything and dies in the line of duty. C.O.P.S. (Concerns Of Police Survivors) helps and benefits the families of our fallen heroes in blue.”

“C.O.P.S. is grateful to be the recipient of such a generous donation from Five Finger Death Punch,” says Dianne Bernhard, C.O.P.S. Executive Director. “We not only appreciate their amazing musical talent, but their support for surviving families and co-workers of America’s law enforcement truly sets them apart. Thank you on behalf of over 47,000 survivors!”

“We’re honored to be able to utilize the thing we love to do most as a tool to help children in need,” explains Ben Burnley of Breaking Benjamin. “Organizations such as Prevent Child Abuse America remind us that we are the voice of the voiceless and positive change is possible in otherwise hopeless situations for these kids. We offer our utmost gratitude to every fan who bought a ticket this summer and made a difference. And last but not least, thank you to the selfless people at Prevent Child Abuse America for inspiring greatness and all that you do to make the future brighter for so many.”

“We are very grateful to the members of Breaking Benjamin, not only for this incredible donation, but for helping to spread the world that child abuse and neglect prevention is possible,” adds PCAA President & CEO, Dan Duffy. “This donation from Breaking Benjamin and their fans will go directly towards programs like Healthy Families America that are making a difference in local communities across the country. At Prevent Child Abuse America, we say that ‘we all have a role to play,’ and we hope that others are inspired by Breaking Benjamin to learn more about the ways that each of us can make an impact in our local community. Thank you again to Ben, Aaron, Shaun, Jasen and Keith for your generosity on behalf of our nation’s children.”

Due to fan-demand, Five Finger Death Punch and Breaking Benjamin announced an expansion of their current co-headlining North American Outdoor Amphitheater Tour with additional dates which will take both bands through Fall 2018 in Arenas. Co-produced by Live Nation and Frank Productions, the tour featured special guests Nothing More and Bad Wolves on the summer leg. On the fall leg, global 2018 breakout rock band Bad Wolves will once again join the trek on select dates and Swedish heavyweights In Flames on other select shows. Chart toppers From Ashes To New will be support on all fall dates. The artists on the tour are also dominating the rock charts with their most current singles: Five Finger Death Punch at #1 last week with “Sham Pain;”  Breaking Benjamin at #3 with “Torn In Two;” Nothing More at #8 with “Just Say When;” Bad Wolves at #9 with “Hear Me Now (feat. Diamante),” and From Ashes To New coming off a #2 hit.

For tickets to the biggest rock event of the year, VIP offerings and more info, visit here and here. 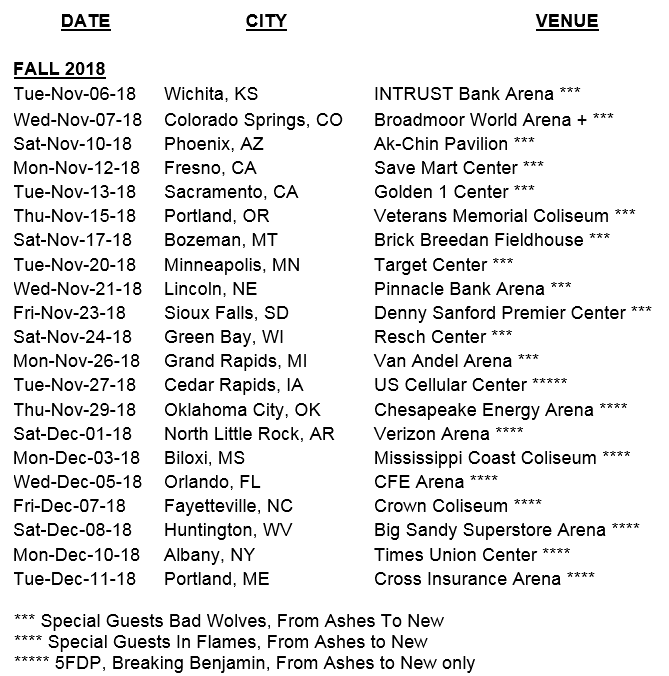