Festivals like Dirt Fest are the celebration of life. So get out there and have fun before you take that terminal dirt nap. We’re only here once, Jack.

Aug 13, 2016, will go down in the annals of metal history for many reasons. First, Dirt Fest 2016 came rolling into Pontiac, Michigan for its first major location change in quite a few years. Instead of being two days, everything was crammed, smashed, and insanely pulverized into one nonstop Saturday with an after-party taking place at the Crofoot Ballroom after the final headliner left the Omega main stage. 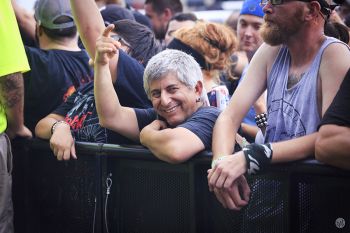 The day began with light rain and gray skies, but the weather didn’t deter those gathered in the small city that sprouted on the Crofoot Festival Grounds to kick off a new era of the Dirt Fest saga. With four stages going, the grounds were loud and alive with live music on the Omega, Tasteless Threads, National Rock Review, and Crofoot stages. Spaced by the merchandise tents, food vendors, and meet & greet areas for the bands and fans to interact, there was plenty to keep festival goers occupied between favorite bands.

With VIP doors at 11:00 am and general doors at 12:00 pm, the event staff from the servers to security helped to make the show run as smoothly as possible in a new format and location.

Dirt Fest has grown over the years to a level of professionalism on par with national festivals. The event is a favorable destination for both local and national artists and attracts large sponsors, like 101 WRIF: The RIFF (Detroit Greater Media radio franchise), as Matt Dalton spoke to in his interview with us days before the event.

With the roster of bands being simply too great to go into each one in detail, this review will focus on the main stages. It was a two-stage system to allow one band to play while the next band up was doing a sound check to keep the pace of things flowing smoothly. Up first was Cincinnati, Ohio’s own

Up first was Cincinnati, Ohio’s own Sea of Treachery. Followed by their very close friends having been on tour with them for much of the summer, Flint, Michigan’s It Lies Within. They are currently out on The Roll For Initiative Tour with Tear Out The Heart. Then, the mighty Beyond Threshold from Rockford, Illinois. They are scheduled to open for the Dope reunion tour in September when it rolls through Battlecreek, Michigan. 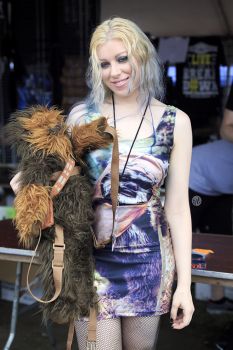 Soil took over and brought the music and the mojo out to the crowd during their set. Watch for them to be out and about in the UK and Europe starting in late October.

Following the Pavement Entertainment artists were none other then For the Fallen Dreams. This four-piece Michigan band got into the “Face” of the crowd and demanded their attention. And receive it they did.

Detroit natives, Walls Of Jericho followed to out-bench the crowd. It was the first time Candace (vocals) had a special someone see her go all out in a live setting.

The fuckery then began in earnest when the unruly sons of Razor & Tie Records, Wilson, came to make an impression on the crowd. Be that with an inflatable phallic prop, confetti canons blazing, or just their damn good music playing made it a tasty tease for new music coming from the bands we hope sooner rather then later. Catch them out with Crobot and Sevendust for most of September.

Bury Your Dead then stepped up for Dirt Fest 2016 on the Omega stage to let loose their brand of hardcore music breakdowns. The Boston fellas showed no signs of rust as they played for far too short of a set for our liking. Sumerian Records has a nice little problem on their hands with Born of Osiris; they’re too damn good. But maybe that’s just us being jealous of the band as they set their sights on the UK and Europe towards the end of September. If you need a traveling photographer, let us know.

And then, before we knew it, there were only the four big bands at the main stage of Dirt Fest 2016 left to play. Attila started off the final four of the day. Chris “Fronz” Fronzak (vocals), Chris Linck (guitar), Kalan Blehm (bass), and Sean Heenan (drums) had just completed recording their new album just shortly before coming out from the Atlanta area to play in Pontiac. Besides playing the tracks the fans wanted hear and filming part of a new video inside a circle pit of the audience, we believe the band might have helped to conceive a child on top of a parking garage overlooking the venue.

Jamey Jasta (vocals), Frank Novinec (guitar), Chris Beattie (bass), Wayne Lozinak (guitar), and Matt Byrne (drums) were up next with a hardcore nuclear blast all of their own.

Hatebreed is no stranger to Detroit and the fans came out to support them for the love the band has shown the D in the past. The guys played their new single along with many of the tried and true songs from their catalog. They will be out on the road with DevilDriver and Devil You Know for quite a few dates starting next month with VIP tickets already available. 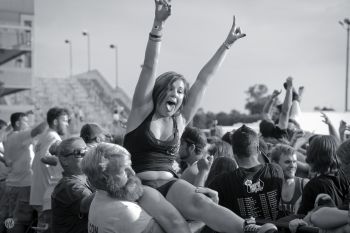 And then it was down to two of the most anticipated bands on the billing at Dirt Fest 2016. Ben Bruce (guitar), Cameron Liddell (guitar), Sam Bettley (bass), James Cassells (drums), and Denis Stoff (vocals) made the trip across the pond to play as a small band you might have heard of in Asking Alexandria. The Sumerian Records artists had frenzied screams of female fans from the start of the UK’s finest first song until the reluctant final chords.

The band isn’t looking back from a change on vocals and are gearing up for the 10 Years In The Black Tour starting in October along side another Dirt Fest 2016 band, Born of Osiris. Joining them on tour are I See Stars, After The Burial, Upon A Burning Body, and Bad Omens.

The night, having caught up with the festivities of the Crofoot Festival Grounds, brought with it the most awaited set of the event from a Dirt Fest 2014 band, Killswitch Engage. Adam Dutkiewicz (guitar), Joel Stroetzel (guitar), Mike D’Antonio (bass), Jesse Leach (vocals), and Justin Foley (drums) based in the Boston area, return to Dirt Fest like long lost friends. The Roadrunner Records artists are currently on tour for the foreseeable future in both the States and UK/Europe in support of the new album, Incarnate.

From great stage lighting, to on point musical talent, and even a few kids on stage, the Killswitch Engage appearance on stage with the crowds at Dirt Fest 2016 will be remembered with horns in the air and fondness for quite some time.

We, at National Rock Review, want to see your photos, hear your stories, or your opinions on how the show was. Hit us up on our Facebook or Twitter page and give us anything related to your experience of this year’s edition of Dirt Fest. 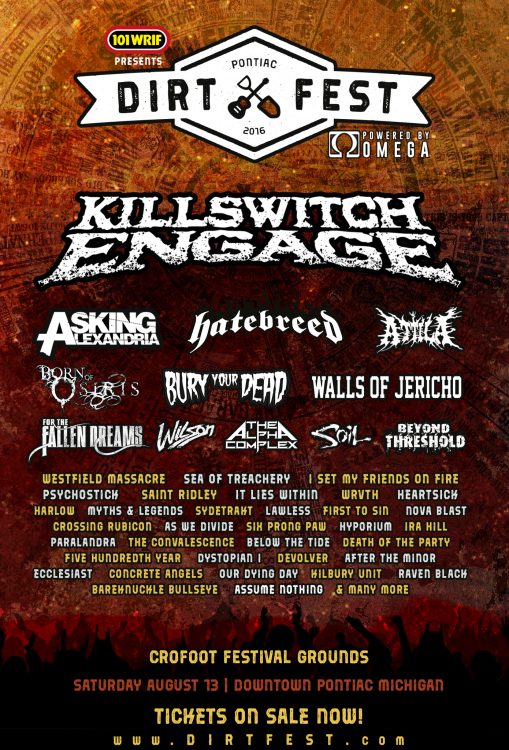