Touring in support of the band’s sixth studio release, Man on the Run, Bush makes a triumphant return to Louisville with The Dose.

05-Jun-2016: There was a noticeable energy and anticipation at the Louisville Palace this Sunday evening as the crowd took their seats for what promised to be a fantastic show with Bush.

They opened their set with “Float” and immediately followed with their popular hit, “Everything Zen.” Gavin Rossdale on guitar and vocals and bandmates Robin Goodridge (drums), Chris Traynor (guitar) and Corey Britz (bass guitar/Vocals/keyboards) came out quickly grabbing fan’s attention.

Over the next 90 minutes, Bush rolled thru a great mix of songs from their catalog. They entertained us with five newer songs from their 2014 album, Man on the Run, including “Just Like My Other Sins,” “This House Is on Fire,” “The Gift,” “Bodies in Motion,” and “The Only Way Out.”

“Testosterone” and “The Chemicals Between Us” satisfy the desire for older material giving little of everything for both the new and hardcore fans.

On stage, the guys genuinely seemed to be having a great time, interacting with the folks in the pit and jumping and racing all across the stage. Their energy was contagious and added to the overall outstanding performance.

There were a couple of memorable show moments; the performance of “The Sound of Winter” stood out tonite. It’s the deep bass and drum rhythms resonate throughout the room along with Gavin’s vocals and roaring guitar solo.

Gavin also took a few moments to acknowledge the passing of Louisville legend, Muhammad Ali, who passed away on Friday. He mentions that “The Champ” was coming home to rest before launching into “Prizefighter,” which was much appreciated by a grateful audience.

Bush closes out their main set with “Little Things,” in which Gavin hops down into the pit, then over the barrier singing among the fans on the main floor. Not content, Gavin races out the back doors and emerges up in the balcony where he finishes the song’s final verses. It was a moment of incredible spontaneity providing an extraordinary opportunity for many fans. 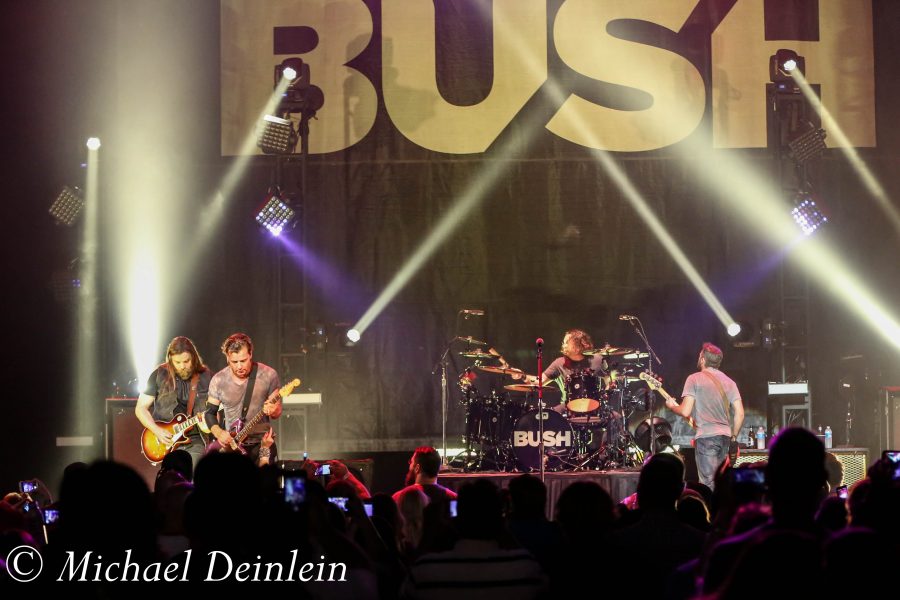 The energy level in the Louisville Palace was already at a high level when Bush came out for the first of their four encore songs. While Gavin is getting his guitar situated, he coyly asks, “Do you guys have any questions?” before vaulting into the opening chords of “Machinehead,” amping up the energy to an even greater level.

A rousing cover of the Talking Heads, “Once in a Lifetime,” is next. Gavin bounds all over the stage with the energy and enthusiasm of a young child, clearly enjoying the moment, as are those of us along for this ride.

With only Gavin now on stage, backlit by a flood of white lights, he dedicates the next song to all of “the lovers, the future lovers, and the past lovers” in the room, performing one of Bush’s biggest hits, “Glycerine.” It was as simple as it was powerful and mesmerizing.

As the evening comes to an end, Bush thanks everyone for coming out and rips into one more huge hit, “Comedown.” The entire room is engaged as they sing the chorus, “‘Cause I don’t wanna come back down from this cloud, It’s taken me all this time to find out what I need.” It is an awesome ending to a fantastic evening with Bush.

Opening the show was the Los Angeles-based Indie rock/grunge duo, The Dose. Indio Downey (vocals and guitar) and Ralph Alexander (drums and percussion) delivered a rousing 45-minute set of original songs fired up the audience. Their music featured some spectacular guitar riffs by Indio and Ralph’s tight drum work provided an entertaining start to the night.