Veteran guitarist and vocalist, David Angstrom, is back with a new band and a new album.

Consistency and reinvention are not words that pair up very easily. Enter David Angstrom. David has been an underrated guitarist that has been on the verge of the mainstream for years. His early blues band, Black Cat Bone, saw a video in rotation on MTV and tours with the likes of Lynyrd Skynyrd. His rock band Supafuzz was such an underground hit, that even Henry Rollins did a guest vocal on their last album.

Couple those successes with his role in stoner rock legends Hermano, which happens to feature John Garcia (KYUSS/Vista Chino/Unida/John Garcia), and you can start to see a picture becoming clearer. Consistently, Angstrom has reinvented himself and his music to create some of his best-known work.

Ands now, Angstrom is at it again. Luna Sol is his newest and perhaps one of his most comfortable musical jaunts.

First, let’s discuss Luna Sol. The band was created after Angstrom moved to the Colorado Rockies. Drawing inspiration from his surroundings, he wrote the songs that would become Blood Moon. But in order to take over the world, he needed a band and hand-picked his counterparts. Adding drummer Pat Gill (The Feds, ’76 Pinto), guitarist and vocalist Shanda Kolberg (The Swanks), and bassist and vocalist Shannon Fahnestock (The Swindlers).

After completing the lineup, it was time to create the album, which they did so over 10 days at Sierra Estates in Colorado.

That all brings us to the music. Oh boy, the music. 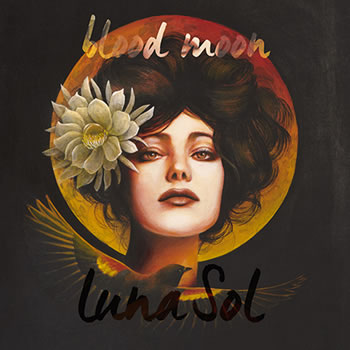 Full throttle rock n’ roll. Those are the words that feel best describe the album opener, “Bridges.” From the moment, you feel that momentum building, all the way through the blistering solo to end the track. You know damn well what you’re in for and you better believe it’s going to pack a wallop.

Next up is a track that is eerily beautiful. There’s no other way to describe it. It’s kind of difficult to pin down to be honest, but the slow rolling groove, layered with haunting vocals and heavily distorted guitars provide the perfect soundtrack to the wicked tale. The track is titled “Death Mountain” and it features a couple guest spots that set the mood and carry the sludgy doom to another level. Greg Martin (Kentucky Headhunters) provides a slide guitar that will conjure up feelings of Joe Walsh and the bottom end is held down by David Angstrom’s Hermano bandmate, Dandy Brown. It’s a collaboration that will take a few listens to really grasp it all, but the impact is immediate.

“December” is a track that will appease the most difficult stoner rock connoisseur. With a wicked bottom end and guitars galore, “December” is a ride that you will not want to miss. Easily one of the highlights on the album, which leads perfectly into the massively singable “Leadville.” This is a tune that features a musical march of sorts through a town full of secrets. The start and stop action of the guitars, matched up with the call and repeat of the backing vocals creates a sonic delight that kicks you directly in the mouth or perhaps a bit more south. The female vocals provide a weird (in a totally awesome way) element, reminiscent of Marianne Faithfull in the Metallica tune, “The Memory Remains.”

Stepping back onto the throttle, Luna Sol delivers “Pretty Rotten” next. If you enjoy your rock loud and your pace frantic, this track is gonna be one of your favorites. In fact, it could be suggested for the rest of the album you to strap in and enjoy the ride because up next is the pinnacle of all things Luna Sol: “Operator.” The slow churning riff monster is easily one of the best tracks on the album, perhaps even in David Angstrom’s career… and that’s saying something.

“Standley Lake” is another tale of darkness that can only be appreciated by consuming. It is creepy, but fantastic all at the same time and the perfect lead-in to what is perhaps the most commercially accessible track on all of Blood Moon, “Your War.” “Your War” contains the standout vintage Marshall solo of the entire record and is easily one of the most singable choruses to date. Add in the almost carnival-like outro and you’ve got something unique and memorable.

Inside the mind of a madman is never a pretty place, yet that’s where you find yourself in closing the album. You can feel the struggle and you’ll know the tension is real during the wicked, “In the Shadows.” A tale of love gone wrong, this track will pull you in and flat-out give you the creeps. As the fuzzed out tones build, the song opens up and brings in the full band to explain just what went wrong with the relationship. It’s really a fitting end to what could happen under a Blood Moon.

To sum this up nice and neat for you, Blood Moon is a relentless attack that provides sordid tales and sonic layers like few can in today’s music. An absolute must-have for any rockers collection.

As with all music, support the artists or lose the art. Buy this album, don’t steal it.