As the Rockstar Energy Drink Mayhem Festival rolled through the Detroit area, Body Count both spoke with us and took the stage.

On July 17th, 2014 at DTE Energy Theater in Clarkston, Michigan, Howie D from Hard Edge Radio and National Rock Review got the chance to cover the show and interview the band.

As a long time Ice-T fan, going back to 1988, I was excited at the chance to interview the band, take some pictures from the photo pit, and review their set at this years Mayhem Festival. They did not disappoint and it ended up being one of the highlights of my day.

A large roar came from nowhere as the band was getting ready to start the show. It wasn’t for the band just yet though, that first initial roar was for Ice-T’s wife Coco as she walked out on stage and over to the side to catch the show with both of their bulldogs in tow.

As the band took the stage, the crowd went crazy and started piling in from all over the festival area. It was time for Body Count and when Ice-T made his appearance, it was absolute chaos.

The band was ready to rock and in stellar form as they ripped through some of the old classics and new songs from the new CD, Manslaughter. It was crazy just how many people of all ages were singing the words to Body Count, There Goes The Neighborhood, and even a few of the new tracks like Talk Shit, Get Shot, and Bitch In The Pit. When Ice-T asked for a pit, the crowd gave him a pit. When he asked for noise, they gave him plenty of noise. It was clear how many people came to see Body Count at this years Mayhem Festival and the band was happy to give them what they wanted. They were feeding off of the crowd’s energy and the crowd was feeling the vibe from the band.

As the set was coming to an end and Ice-T was introducing the band, it was nice to hear the big applause for his son, Little Ice, who’s been touring with the band recently and is a part of the new Body Count stage show.

It was time to close out the set and it was time for the one song that almost everyone there watching the show was waiting for. It was time for Cop Killer, the controversial song that got so much attention when it was released back in 1992. Even though the thought and meaning of the tune has been explained many times over the years, there are people who still protest the song and the band. For the thousands in attendance, some of them not even born when the song came out, none of that mattered. They just wanted to see Ice-T and Body Count perform this infamous song.

It had been several years since the last time I got to see Body Count live. Even though it was a shorter set, it was so worth the wait. If you get the chance to catch a Mayhem Festival date or get the opportunity to attend one of their random dates throughout the year, I would highly recommend it. I would also suggest picking up a copy of the new Body Count CD, Manslaughter. Yes, the new album is that good.

The interview with Ernie C. and Juan from Body Count.

Some pictures from the Body Count Set that day.

The Manslaughter album is available for immediate download from Amazon. 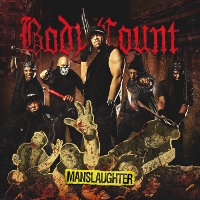