LG Petrov is the Singer/Vocalist for the new band Entombed A.D. In all fairness ‘new’ is not really an accurateword when, in reality, Entombed A.D. is not new at all.

The band Entombed has been around 1987 under the name Nihilist, eventually changing their name to Entombed by the time their dÃ©but album, Left Hand Path, was released in 1990. There have been numerous lineup changes over the years, leading up to the bands 2007 release of Serpent Saints, which saw the band with only two remaining original members; LG Petrov and Alex Helid.

For reasons described in the interview, Alex was not active with the current lineup of Entombed. Rather than continue to wait for him, the band (minus Alex) changed their name to Entombed A.D. and moved on.

August 5th will see the release of the dÃ©but album from Entombed A.D. titled Back to the Front.

I had the opportunity to speak with LG Petrov about the band and the events that let up to this album. It seems that there will now be Entombed AND Entombed A.D., yet there is no news on an upcoming release from Emtombed. So continues the trend of split bands continuing separate, but parallel paths.

LG:It’s very cool. I think because some of the previous Entombed albums didnâ€™t have that sound, itâ€™s a good sound. When I hear it I am happy. Bands like Entrails and so on. Itâ€™s perfectly fine by me!

Bryan Fields: In your vocals, since the 80’s as Nihlist and then Entombed, there has always been a lot of anger and aggression. How do you stay in that frame of mind being older now?
LG Petrov: Iâ€™m just old and frustrated now! On this album now I can sing more how I want to sing, more deep and aggressive. Some of the albums before there were too high-pitched vocals, screaming sometimes. Now we work together. I feel free to sing however I want without someone standing behind me and telling me how I should sing. There was always someone standing behind me trying to have me sing some it different. I just sang it great, why do you want to change it? (Laughs) But this time I think you can hear it, itâ€™s looser. These days I want to sing more death metal!
Bryan Fields: Itâ€™s heavy as hell and it grooves, loose is a good description, natural I guess.
LG Petrov: Natural and relaxed. Iâ€™m really happy that the album is coming out, going to tour, and do what we do!
Bryan Fields: How did you guys hook up with Century Media Records?
LG Petrov: Weâ€™ve been talking for a long, long time, and stuff didnâ€™t really happen when there was a man in charge in Entombed. Just talk, but there was nothing happening. Now, Entombed A.D, we just sat down, letâ€™s do this…ok! They are really great, helping us and supporting us 100%. We’re working with each other for the same goal instead of against each other.
Bryan Fields: Do you have any plans or intentions for getting over to America to play?
LG Petrov: Definitely! We’re doing some festivals in August then we’re going to Japan of all places! We’ll start out in some small clubs, see how it goes. After that weâ€™re going on a month tour with Grave. Nothing confirmed for America, but I would think it would be the beginning of next year. We’re just simple heavy metal guys, death metal guysâ€¦headbangers!
Bryan Fields: Iâ€™ve heard different terms used to describe the music of Entombed and now Entombed A.D. Do you conceder yourselves a death metal band?
LG Petrov: Yes!
Bryan Fields: Now we have an official term and no one can dispute it because you said so!
LG Petrov: It’s death metal. Thereâ€™s always going to be thousand people with a thousand opinions, thatâ€™s fine with me. I have those opinions as well.
Bryan Fields: There have been different labels over the years, Grind Core, Death, and Roll.
LG Petrov: Exactly! I donâ€™t know where that term Death & Roll came from, but there was some rock and roll in some of the older albums, but now its death metal and we have some new riffs and ideas for new songs and they are definitely Death Metal! You can be sure of that!
Bryan Fields: I am very pleased that you are continuing on and with the new track as well!
LG Petrov: Thank you. This is the way it shouldâ€™ve been for the past seven years since the last album. It has been a long wait, but now we can go ahead and do what we do.

Available for pre-order on Amazon: 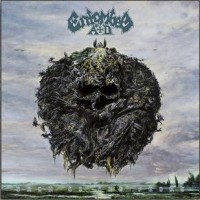 Back To The Front CD