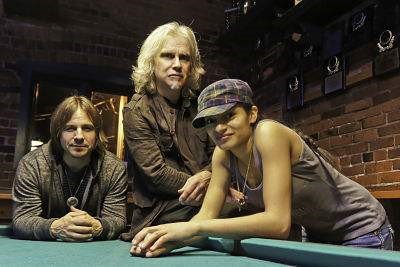 The band is fronted by longtime guitar ace Todd Wolfe, known for his work with, among others, Sheryl Crow (five years as her lead guitarist in the nineties); Carla Olson (the Textones); and Leslie West (Mountain), throughout a stellar career. Todd and band had just returned from yet another road trip – four in 2013 alone, totaling close to 40,000 miles, from the Czech Republic to San Francisco – and received year-end accolades including a “Best Band” nomination from Rockwired Magazine. Wolfe has released seven albums since 1999 and has written songs for acts as diverse as country star Faith Hill and renowned jam band, Phish.

“Miles To Go” follows the same formula for success so clearly visible in his first release: excellent original material punctuated by world class guitar skills, all delivered via above average vocals. Keep up the great work, Mr. Wolfe, I hope to catch you live and on stage some day.”
~ BLUESROCKERS

“Miles To Go has a deep bluesy soul with a tinge of Southern rock and a psychedelic vibe…’Wolfe’s current bandmates are both incredibly skilled musicians, each adding a unique element to the band’s overall sound.”
~ BLUES ROCK REVIEW

“The Todd Wolfe Band deliver a powerful sonic experience with the release of ‘Miles To Go’ …with a mix of blues, Southern rock, and even a little soul, the eighth release by this band has me yearning to hear the earlier releases.”
~ ROCK OVER AMERICA

“Imagine some power trio mixed into a Texas blues foundation and overlaid with trippy psychedelia…that’s the essence of (Todd) Wolfe’s music.”
~ HITTIN’ THE NOTE