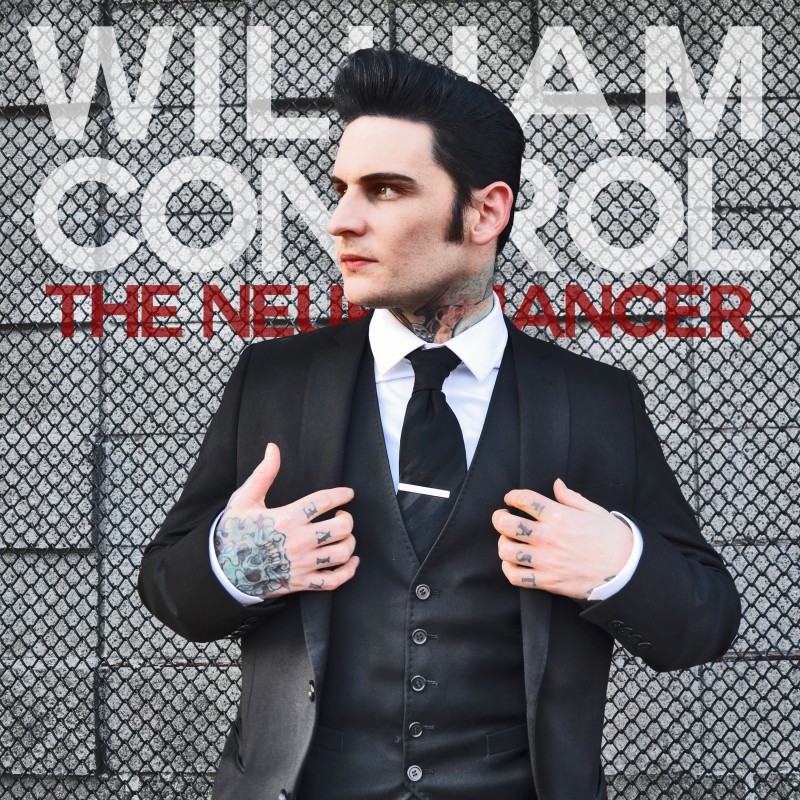 As lead vocalist for Seattle-based rockers Aiden, Francis has never been a shy character. The charismatic vocalistâ€™s performance evokes such punk and glam legends as Iggy Pop, David Bowie and Ian Curtis, while creating a new standard in onstage performance excellence. Over the last decade, Aiden has released six full-length albums, two EPs, a live album, and toured throughout the world.

Francis says he took on the William Control persona as an outlet to create music that didnâ€™t match the style of his other band, Aiden. The leap from punk rock to electro-goth-darkwave isnâ€™t one many musicians have attempted nor even succeeded at. As a producer, William Control melds together a dark, industrial foundation with strains of new wave sensibility reminiscent of Neuroticfish, HIM, Sisters of Mercy, New Order, Bauhaus, Covenant, Gary Numan, and Depeche Mode. Although Wil is not trying to â€˜reinvent the wheelâ€™, he exudes such confidence that you would think he invented this genre of music. William takes â€˜Controlâ€™ (pun intended) and makes this genre his own!

I absolutely love when an artist takes on a side project to explore new genres of music and actually sticks to doing something completely different than their current project. This is what Francis has done with William Control. In 2008, William Control released his debut album, Hate Culture, that Francis says is a story about a man named William Control during his last night on Earth because he wishes to kill himself. Hate Culture peaked at #12 on the Billboard Electronic Albums chart and #43 on the Heatseekers chart.

In 2013, as William Control, Francis released the first of three novels, Revelator Book 1: The Neuromancer, which brings to life the nihilistic story of William Control, as told through Hate Culture, Noir, Novus Ordo Seclorum, and Silentium Amoris. During its initial pre-order, the First Edition sold out almost immediately motivating Francis to release a Second Edition. Francis has also released the books Prose & Poems and Flowers + Filth.

Wil is the perfect front man for the darkwave generation. He mixes the charisma of Andrew Eldridtch (Sisters of Mercy) and Ville Vallo (HIM), with the swagger of Frank Sinatra. He has had several successful tours playing alongside such acts as Escape The Fate, Jeffree Star, Black Veil Brides, The Used, Davey Suicide, Fearless Vampire Killers and Combichrist.

Fans have been eagerly awaiting The Neuromancer. Due to the â€˜buzzâ€™ on the Internet, it appears this will be his most successful release to date. This album maintains the theme of William Controlâ€™s previous albums, but is not repetitive in the slightest. It was written, engineered, and produced by Francis at his Hell’s Half Acre recording studio with some additional writing help from Kenneth Fletcher.

Francis says the new album is a prelude to Hate Culture, which tells the story of what happened to this character before he wished to kill himself.

Similar to his previous albums, Francis opens The Neuromancer with a somber spoken word introduction that is darkly poetic and beautiful all at the same time. Francis may very well be the Hal Douglas for the darkwave generation!

The Introduction is where William Control tells us that he looks in the mirrors of his own sanity but doesnâ€™t recognize the monster looking back at him. He finds himself wandering through the halls of regret, while riding in a car with a girl, ending on one last thought; â€œWe are driving on the curb of my own mistakes and I fear, this may be my last night on earthâ€.

Adore (Fall in Love Forever) kicks in with dark electro beats and a smooth underlying guitar riff. Here, the character wishes to die by his loverâ€™s side. He is lovesick and longing to be with his lover forever. He emphatically states, â€œI need to exist in your world, my loveâ€.

Revelator opens up with an atmospheric fluttering synth sound similar to that of VNV Nation. Here, our character falls to the prey of the dark side. He succumbs to the â€œviolent sins in the nightâ€ stating â€œYou say I am a child of God. Some claim the devilâ€™s hand. Oh Lucifer, what have you done to this man?â€ Wil adamantly states the â€œnew romantic boys are hereâ€.

Price We Pay has a strong backbeat of guitars built around a drumbeat that somewhat reminds me of Black Veil Brides. Here the character shows his acceptance of succumbing to the dark side. He tells us how his loverâ€™s â€œputrid heart is kept from lovingâ€ and that sheâ€™s â€œdoomed eternally to lieâ€.

In God Is Dead the character tells us how God is dead but that Hell wonâ€™t even take him. He tells us there is a picture of a personal god that he chooses. He despises this picture of this god he chose and that the picture he despises is he.

Filth and the Fetish reintroduces the signature violent and sexual themes of William Controlâ€™s earlier albums. While in the â€œwhipping haus, I can be anythingâ€, he tells us he wants his loverâ€™s body â€œbruised and bloodyâ€ with â€œa pain you can love, a hurt you can swallowâ€. His lover is the filth and he is the fetish. Ashley Jade adds backing vocals with her hauntingly beautiful voice.

Illuminator starts with a peaceful choir singing, reminiscent to the beginning of This Corrosion by Sisters of Mercy. Which was once a loving relationship has now turned into a hateful relationship. In this song the character tells us â€œIâ€™m a lover in a great disguise. Iâ€™m no stranger donâ€™t act surprised. Iâ€™ve been fucking since the dawn of time. I am the liar, the God of this Age. Say my name. Luciferâ€. He tells his lover to look at her own demise and to understand that â€œLife is just life and death will bring us all together somedayâ€. Andy Biersack appears here to continue the narration started earlier during the introduction.

Passengers is a beautiful ballad built around the soft sound of a piano. He sings to his lover about an estranged love that wonâ€™t seem to go away. In a soft-voice, he tells us â€œDear love, I know weâ€™re estranged, like passengers, on an old rotten trainâ€. While listening to the wonderful piano playing, I canâ€™t help but picture Francis as a young, dark, twisted, version of Billy Joelâ€™s Piano Man singing in an after-hours underground S&M club.

Musically, The Blade picks the pace back up. Here the character tells his lover to â€œHold me closer to the blade of lifeâ€ to â€œTurn your heart to stone. Take my crown of thornsâ€ that â€œWe can suffer together. We can suffer aloneâ€. He invites his lover to succumb to the dark side just as he has.

In Love is a Shadow the character abandons the idea of love. The seeds of wanting to kill himself have been planted in his thoughts as he tells us â€œLove is ugly, only stupid people suffer foreverâ€. His lover wants to abuse him and he wants to be used by her. â€œLove is a shadow and game we play alive. Love is illusion and game we play at night. Break my skin, take my heart and dieâ€.

The album ends with the hauntingly poetic Where The Angels Burn in which he tells us â€œThat place, Heaven, will never exist for me as long as you are not there standing by my sideâ€ and that â€œNothing matters except dying a thousand deaths and receiving the simple pleasure of holding you one more timeâ€. The song fades away with him chanting â€œAll My Loveâ€ over and over.

In summary, Francis has crafted a morbidly beautiful story about a man, his lover, and wishing to kill himself if he can no longer be by her side. Musically, he mixes different styles and sounds while remaining consistent with the themes his fans have come to expect from him. He is a man speaking from many perspectives. He uses the disagreeing voices in his head to complete his varied and seemingly different conclusions into a celebratory affirmation of lives and passions living outside of mainstream acceptance.

Whether with his voice, his musical styling, or words, William Control demands validation and recognition for a subcultureâ€™s all but denied existence, and in doing so has built a cult-like following of devotees from around the world.