In an interview with Gibson.com, Dick Wagner stated, â€œAll I really know is being a rock nâ€™ roll guitar player. Thatâ€™s what my life has been about.” This rings true as we look back on the lifetime as a songwriter, guitarist and producer/arranger that Dick Wagner shared with countless top acts.

Wagner was born in Oelwein, Iowa, in 1942. Later, his family moved to Michigan where he graduated high school in 1961 and began his music career. Never one to take the lime-light on as a leading man, he was an incredibleÂ sideman, earning his place in rock nâ€™ roll history. In a recent interview, Wagner stated, â€œBeing a sideman was a definite choice I made. I was going to pursue a solo career after The Frost. I always wanted to kind of be out front, but at heart Iâ€™m kind of shy. Being a star is not a big thing to me.â€

Wagner had regional success with several acts in the Southeastern Michigan music scene before his work as a sideman began. His first group was a Waterford, Michigan band called The Invictas. The band achieved some local success and, in 1960, earned them the chance to back Jerry Lee Lewis at a roller rink show in Ortonville, Michigan, and Roy Orbison at Greenâ€™s Pavilion near Adrian, Michigan.

From there, Wagner joined a Detroit-area band called The Eldorados. Wagner played with the group until they broke up in 1964. The Eldorados was important for Wagner as Warren Keith was a fellow band member whom Wagner would join up with to create The Playboys. They changed their name to The Bossmen and released, â€œTake A Look (My Friend),â€ as their first single, written by Wagner. 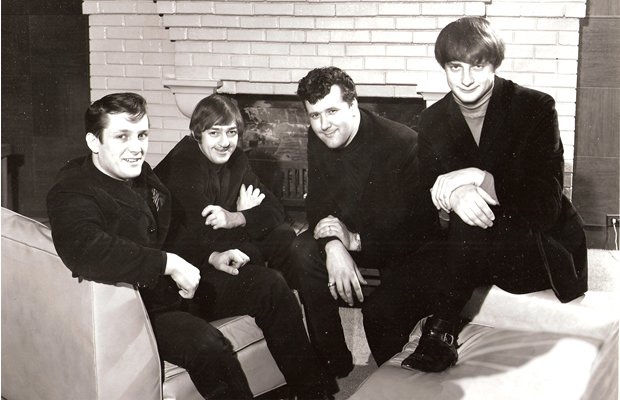 Dubbed as Saginawâ€™s #1 Garage Band, The Bossmen were a 1960s local regional phenomenon. On Wagnerâ€™s official website, he mentioned that kids would get out of school and go immediately to Danielâ€™s Den in order to be at the front of the line, which would invariably stretch for blocks down the street. â€œA Bossmen appearance was always a huge event, which led to pandemonium when the band hit the stage,â€ stated Wagner, â€œWe were a force to be reckoned with.â€

In 1966, Mark Farner, later of Grand Funk Railroad, joined the group providing background vocals and rhythm guitar on the biggest Bossmen single, â€œBaby Boy.â€ The Bossmen had eight #1 hits, all in a row, during their three short years, 1964-1967. With their fast gaining popularity and string of regional hits, they were often referred to as the Michigan Beatles.

According to the Wagner interview with Review Magazine, the band broke up due to a scandal involving their drummer, Pete Woodman, being busted for smoking marijuana. Wagner dismissed Woodman due to the negative publicity surrounding the incident. Wagner hooked up with an Alpena, Michigan, band called Bobby Riggs & The Chevelles and billed them as the New Bossmen.

Wagner spent some time working with other Michigan bands, some as songwriter, some as producer, and some as both. These bands included Bells of Rhymny, Elation Fields, The Paupers, Tonto & the Renegade, The Fabulous Pack, and The Frost. 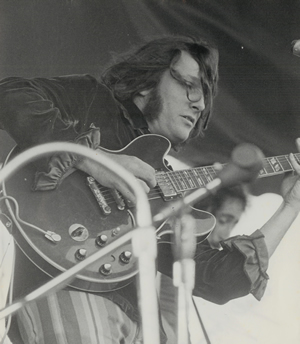 The Frost were one of the few local groups who could match the intense six-string firepower of local favorites the MC5. They quickly became popular,Â and started packing venues such as Detroitâ€™s prestigious Grande Ballroom, and large outdoor gigs such as the Meadowbrook Theatre where they played in front of 10,000 people alongside the MC5 and the Stooges.

Detroit was a hotbed for Rock nâ€™ Roll bands in the 1960s and The Frost became one of the areaâ€™s top drawing acts. The Frost signed to Vanguard Records and released their debut album, Frost Music, in 1969. The album quickly sold over 50,000 copies in its first few weeks making it the #1 record in Michigan.

Although they were at the peak of their popularity in Michigan, Vanguard Records did little to promote them outside of the area. The band recorded some new studio tracks and combined them with some live recordings from the Grande Ballroom on their sophomore release, Rock and Roll Music. The title track became their only Billboard charting single, peaking at #105. The Frost followed Rock and Roll Music up with one last album, Through the Eyes of Love, however album sales were poor due to Vanguardâ€™s continued lack of support.

The Frost’s endÂ came when drummer, Bobby Riggs, left the group during a tour of Canada. Riggs was upset over the band not receiving the admiration they regularly received at home while out on the road touring. They went from playing in front of huge Michigan crowds, such as the 200,000 they played in front of at the 1970s Goose Lake Festival near Jackson, Michigan to much smaller crowds outside of Michigan. Riggs flew home from Toronto and Wagner had to cancel the remaining shows.

In 1972, Wagner moved to New York and formed the short-lived group Ursa Major. The original line-up included keyboardist, Billy Joel, and drummer, Rick Mangone. Joel left the band, so Wagner replaced him with Greg Arama, formerly of the Amboy Dukes, on keys and bass. They released one self-titled album and hit the ground running with triumphant tours opening for the likes of Jeff Beck and Alice Cooper.

The Ursa Major album remains a cult favorie. The band broke up well before having a chance for the record to succeed and the potential next great power trio ended. Although the band members did not have the stamina or drive to stay with it, Wagner was compelled to create and perform. He kept moving forward, writing, singing and playing his raging guitar solos. 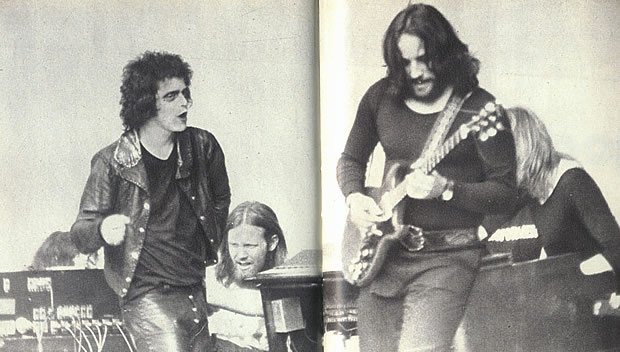 In 1973, Ezrin recruited Wagner to play in Lou Reedâ€™s band. Wagner was a featured guitarist on Reedâ€™s dark and controversial album, Berlin, while following up as Reedâ€™s band leader and arranger for Reedâ€™s Rock nâ€™Roll Animal Tour. The band toured internationally with Reed, culminating in the Rock nâ€™ Roll Animal live album, recorded at the New York Academy of Music in December 1973.

In 1974, the members of the original Alice Cooper group parted ways. Cooper brought Wagner on-board as his principal co-writer, lead guitarist and band director. Together they wrote their first concept album, Welcome to My Nightmare. Wagner and Cooper found a perfect working relationship together in composing music and writing lyrics. â€œOnly Women Bleed,â€ was the albumâ€™s big hit single and helped propelÂ The Nightmare TourÂ into one of the biggest and most successful rock productions in the 1970s. 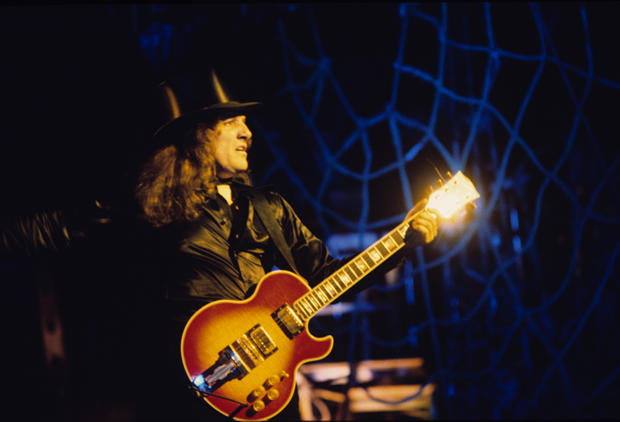 The Nightmare Tour became the largest and longest touring rock show of the time which covered more than 120 cities over an eighteen month period. The film, of the same name, became a TV special, later to be released on home video. The show featured dueling lead guitars of Wagner and Steve Hunter in a guitar battle. The tourâ€™s elaborate stage show helped set the standard for Rock and Roll theatrics. Shock rock was born.

According to Wagnerâ€™s business partner, Susan Michelson, much of the fun and creative genius that Wagner and Cooper shared together was because they were brilliant, profound, intuitive, and often hilarious writers. Listening to Wagnerâ€™s solo songwriting, you can hear his grasp of language and expressive lyrics. 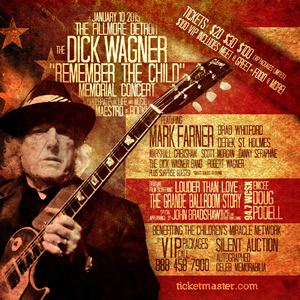 Wagner returned to Saginaw in the 1990s and opened his own recording studio. He also joined John Bradshaw in the Remember The Child project. Wagnerâ€™s song, of the same name, addresses the issue of child abuse. Written from the point of view of a child, the lyrics and sing-song melody deliver a powerful and poignant message to adults that a child will forever remember the love or abuse of their childhood. Bradshaw selected, â€œRemember The Child,â€ as the theme song for his award winning PBS television special, Homecoming: Reclaiming and Healing Your Inner Child.

In 2005, Wagner closed his Saginaw recording studio and moved to Phoenix, Arizona, where he was writing a new album with Alan Gordon. Wagner also worked with the Italian singer Chris Catena and produced and wrote songs for Wensday, an artist whose album he released on his own label Desert Dreams Records.

Wagner suffered a massive heart attack and stroke in 2007. He spent two weeks in a coma, after arriving DOA at a Scottsdale hospital, and awoke with a paralyzed left arm. He continued to write songs, while recovering from his heart attack, and also began writing his memoirs.

In 2009, Wagner released a new CD, Full Meltdown, on his Desert Dreams Records. The CD features 15 lost and newly discovered songs recorded by Wagner between 1979 and 1995. He also produced the band Warsaw Pact, the independent artist Brandon Bullard and scored the soundtrack to the Indie horror film Silas Gore, A Film Trilogy along with Alice Cooper and British band Velvet Hearts. Wagner also contributed some lead guitar work on Cooperâ€™s Welcome 2 My Nightmare CD.

In 2011, Wagner was diagnosed with Normal Pressure Hydrocephalus (NPH), aÂ form of dementia.Â  Wagner was able to make a significant recovery, after a successful surgery at Barrow Neurological Hospital in Phoenix, Arizona, and regained almost all of the dexterity which had been lost over the course of the disorderâ€™s progression.

After battling serious health issues for close to five years, Wagner made a triumphant return to performing live in the fall of 2011 when he and his band played a two-night stand at Whiteâ€™s Bar in Saginaw, Michigan, and the Magic Bag in Ferndale, Michigan. 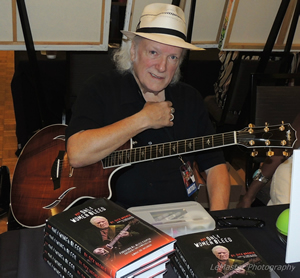 In 2012, Wagnerâ€™s memoirs, Not Only Women Bleed: Vignettes from the Heart of a Rock Musician, was released to tremendous acclaim, spending more than two weeks at #1 on Amazon.comâ€™s Hot New Releases in Biographies & Memoirs of Entertainers. His book has won five international book awards. This same year, Wagner joined forces with a European band he produced, The Mugshots. Wagner is featured as lead guitarist as well.

Sadly, Dick Wagner passed away on July 30, 2014, in Scottsdale, Arizona. Wagner died from respiratory failure after contracting a lung infection following heart surgery. He was 71. His last trip to Michigan came just a month before his death, when he played a show on June 29, at the Lebowsky Center in Owosso.

Following Wagnerâ€™s passing, Desert Dreams Productions, LLC made a statement:Â â€œThereâ€™s a reason that Dick Wagnerâ€™s fans and friends call him, â€˜The Maestro of Rock.â€™ Dickâ€™s guitar playing was both wild and fluid. His songwriting, guitar playing and musical arrangements were uniquely rockinâ€™, majestic and orchestral. Dick was prolific not only in the tangible realm of what we can see and hear but in the boundless energy of his spirit, which will never die. He was a fighter, but in the end his body couldnâ€™t keep up with his spirit, and so he lays to rest. Dick said in 2013, â€˜Love is in the air. Breathe deep.â€™ Take Dickâ€™s advice into your own hearts, and embrace all the passion and beauty in the world.â€ 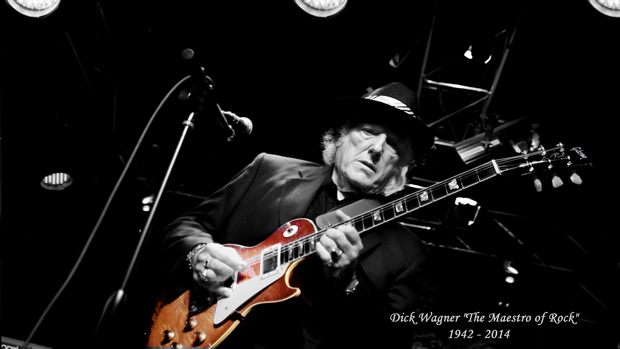 There will also be a feature film screening of Louder than Love: The Grande Ballroom Story, a special appearance by NY Times Best Selling Author John Bradshaw and a silent auction offering exciting celebrity autographed merchandise. Doug Podell, from 94.7 WCSX, will emcee the event.

Tickets are $20, $30 and $100 for VIP. VIP tickets are limited and include Meet & Greet with all the celebrity artists, food & wine, plus a goodie bag of memorabilia & CDâ€™s and other surprises.Â Throughout his 50 year career in rock and roll, Wagner generously donated his musical talents to benefit childrenâ€™s charities. In honor of him, concert and auction profits will benefit the Childrenâ€™s Miracle Network Hospitals and the Beaumont Childrenâ€™s Hospital in Royal Oak, Michigan.