Industrial rocker Davey Suicide shows us he is a genuine rock star in the making on his newest release, World Wide Suicide.

Los Angeles transplant, by way of Maryland, Davey Suicide is more than just a singer in a band. He is also a designer who started up his Killers Never Die clothing company and is an accomplished artist who sells his own Rare One Of A Kind Items Beyond The Stage paintings through his Big Cartel site.

According to his bio, Suicide always knew, as a kid, the safe life wasnâ€™t for him. In order to tune out the fights of a broken home and the pressures of church, heâ€™d crank Guns Nâ€™ Roses, Pantera, and Metallica on his stereo and play guitar as loud as his small Peavy amp would allow.

Music kept him away from drugs and other troubles, and his three patron saints became, Axl Rose, Marilyn Manson, and Eminem. Beyond adorning his arm within a tattoo tapestry, he learned one important thing from these icons that eventually inspired him to move from the East Coast to Hollywood or, UnHolywood, Killafornia as Suicide likes to tell his fans.

Suicide tells us that UnHolywood, Killafornia came to be when he realized that there were more graves made in Hollywood than there were dreams. He says he watched many people come and go and get swallowed up by drugs in his past seven years of living there.

â€œItâ€™s important to pave your own road. I hit a ceiling. I had some opportunities that slipped away, and I woke up one day with the idea of â€˜Davey Suicideâ€™. I needed a constant reminder that weâ€™re all in the driverâ€™s seat. If I give up on myself, shitâ€™s not going to go the way I want it to. Iâ€™d rather live by my rules than feel like Iâ€™m stuck inside a box. Itâ€™s about believing in yourself. Put your trust in Suicide,â€ Suicide said.

Suicide made his way to California about seven years ago where he worked as a tattoo artist while getting his music career up and running. Suicide would eventually go on to release his dÃ©but Put Our Trust In Suicide EP in 2012, and self-titled Davey Suicide full-length CD in 2013, both on the Cleveland, OH independent rock/metal label, Standby Records.

“World Wide Suicide is kind of about the misinterpretation of what we are about.” ~ Davey Suicide

After spending the bulk of 2012 and 2013 extensively touring the US, and a dÃ©but UK tour, Suicide is back with his second full-length effort on Standby Records titled, World Wide Suicide. Davey Suicide is made complete by Needlz (keyboards), Drayven Davidson (drums), Brent Ashley (bass), and Mikey 13 (guitar). Their bio states they distill heavy metal, industrial, and punk into anthems that are as corrosive as they are catchy. Whether or not youâ€™re prepared, Suicide has arrived.

The album starts out with an intro titled, â€œYour Honor The Asshole.â€ This is a continuation of Professor Asshole from his dÃ©but album. According to Suicide, Professor Asshole is a parody of the kind of people who do not get what the band is about further defining them as close-minded old-fashioned America.

â€œWorld Wide Suicideâ€ starts out with Suicide singing softly over an interesting intro. During this intro, Suicideâ€™s voice is reminiscent of Claus Larsen, from his early days in Leaether Strip. However, around 42 seconds in, the song kicks into full gear pulsating with machine-like energy similar to that of Ministry. The drum and vocal mix is reminiscent of the British metalcore band, Architects, although slightly more rhythmic and musical. The wandering guitar riff during the chorus pulls the listener in and works well with the distorted vocal tracks and harmonies.

In an interview with DJ Rossstar, Suicide mentions, â€œOutside of our fans, a lot of people take everything that we do by face value. When the first album came out, a lot of kids were starting to get suspended from school for wearing our shirts. We were getting a lot of negative heat and I donâ€™t think the adults that were enforcing this really knew that we were actually helping these kids, so World Wide Suicide is kind of about the misinterpretation of what we are about.â€

â€œUntil Weâ€™re Deadâ€ has a good bounce to it. It is a slower-tempo song with more singing than screaming, and shows that the band not only has power, but musical talent, too, which is something far too many hardcore style bands lack. I love the double-time hi-hats. They create fantastic locomotion during the choruses. In the Live With DJ Rossstar interview, Suicide tells us â€œthe song is about finding a person who has similar demons as you and you realize that they are just as fucked up as you, and then you fall in love with them.â€

â€œThe Hole Is Where The Heart Is,â€ screams of Rob Zombie and Marilyn Manson. It has a â€œBeautiful Peopleâ€ kind of headbanging rhythm. The keyboard accompaniment, though cool sounding, was a bit loud in the mix as I kept getting distracted by it in the final chorus.

â€œThe Devil Inside,â€ starts out with a keyboard intro reminiscent of Wumpscut, then quickly switches to another pulsating rocker. The guitars are startling when they start in on this song, because they are mixed so radically different from the guitars on the rest of the record. They seem to sound much thinner which helps the higher-note melodies sound a bit cleaner.

On â€œOnly Human,â€ the guitars come back on full once again, and the song starts with a cool riff. It then breaks down for a smoother sounding verse section. Suicide, instead of singing like heâ€™s done on the previous songs, rasps his way through the verse. The vocals might fit better had he would have backed off on the throat-gravel just a bit and sang the verses instead.

â€œUnderdosedâ€ is a perfect example of Suicideâ€™s vocal range. He goes from larynx-shredding screams, then raspy singing, to full-throated clean melodies, all of which he pulls off beautifully. The half tempo chorus works well for the song, thought the guitar riff during the pre-verse and intro was just a touch too quiet. It has the power you would expect, but could have been a decibel or two higher in the mix to give it a bigger punch. 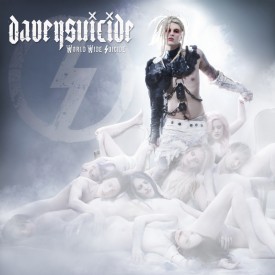 On â€œNothing Is Sacredâ€ it appears Suicide is going for an in-your-face machinecore sound. They pull it off but the song was softened by too much compression. The entire song dips every time the kick drum hits. The trouble with this kind of sound is the compression has to be just perfect to avoid ending up with a weak sound, or a pulsating sound that dips on transients. This song tended towards the pulsating side and backing off on the compression ratio a little bit would have helped.

â€œImperfectâ€ is a balladesque song similar to that of â€œIn My Chest Is A Graveâ€ or â€œIâ€™ll Take A Bullet For Youâ€ from Suicideâ€™s debut album. The riff during the bridge before the solo presents a strong hook, but could have done with more of a punch. There is some amazing songwriting on this tune, and it has one of the coolest guitar solos on the entire album. However, having the guitars mixed louder would have helped with the drum fills.

â€œDirty Rotten Filthy Richâ€ is another favorite on the record. The riff pulses on the downbeat in the second bar. This is a slow-jam, fist-in-the-air stomper for sure, and the solo was one of the best on the record, hands down. This song should play well in a live setting as it is easy to imagine the crowds chanting along with the choruses.

â€œKamikaze Culture Shockâ€ was a good closer for the album, though the drums overpowered the guitars in the mix. The chorus was crash-cymbal voicing, which were perfect in execution, but buried the guitars.

Suicide says there are a few different themes going on within this record. In his Live With DJ Rossstar interview, Suicide says â€œThe things that are wrong with you are the things that make you specialâ€, but the big concept for him is â€œabout figuring out that you have an enemy and you basically are looking at your enemy dead in the eye saying that Iâ€™m not going to be controlled by you anymore.â€

The next chapter is here, and whether youâ€™re ready or not, the Suicide has arrived and theyâ€™re going World Wide.

Davey Suicide is currently out on the We Love Tour with Combichrist, William Control, and the Darksiderz.