The Crofoot venue had the crowd several rows deep to the stage, and fans were truly getting into it. However, 4/20 is, of course, not your typical show. It was a night for Juggalos to gather to celebrate the fourth annual 420 show.

This show rolled into town as part of Twiztid’s Juggalo Invasion tour. Many of the attendees were wearing makeup in tribute to the artists. There was a definite family feeling for the people in attendance. You could sense there was something magical in the air, and the crowd was buzzing with energy. The bill included 13 artists spanning several genres including hip-hop, gangster rap, horrorcore, rap metal, and goth rock.

The night began with rapper Knowledge Da MC from Roach Records in Lansing, Michigan. His rhymes fell into an easy groove as he made his statement, “I believe my shot is overdue; I am Knowledge.”

Menace 2 Sobriety followed their distinct punk and hip hop sound. Their infectious sound hooked the crowd getting them pumped up for the acts to follow.

Godz of Kaos opened with a performer playing an Aboriginal didgeridoo. The three vocalists worked the stage each of them from one side to another, directly engaging fans. One of their stand-out songs was â€œBlow Your Brains Out.â€

Several other artists including The Real Chaos, AJAX, and Trilogy, put on entertaining sets that continued to fuel the energy on the growing crowd. 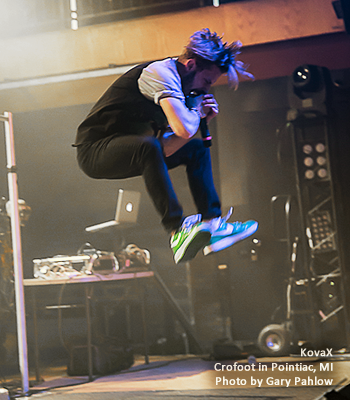 A highlight was, KovaX from Dearborn, Michigan. His music was infectious as was his stage show. Simple, understated, just one guy with no makeup or wild outfits. He jumped and bounced about like a rabbit, doing leaps you might only see at a rock concert. KovaX was hard to ignore.

Following a break, gutter goth rock band Davey Suicide hit the stage. They hail from what Davey calls ‘UnHolywood, Killafornia.’ These guys are known for their non-stop energy and this night was no different. Their set was brief but a well-place change of pace for this concert bill.Â Their high-energy show amidst a stage flooded with colored lights and strobes made for a genuine rock concert spectacle.

The crowd was growing anxious for the headliner, but there were yet several more artists up first. These included Lex the Hex Master (who just released his debut album, <em>The Black Season</em>), The R.O.C., andÂ Boondox. The later has a unique style and swagger that draws from his southern roots. The crowd loved it.

Next was Blaze Ya Dead Homie, who showed up looking like he was going to a funeral. Afterall, Blaze is touring in support of his recent album, <em>The Casket Factory</em>. Blaze knows how to work the stage. He is tall and intimidating, but the crowd loved him, and he played it up in response. He had them singing along on every song make his set one of the highlights of the evening.

After 12 artists, it was time for the night’s headliner. Twiztid hit the stage, and the crowd erupted. Jamie Madrox and Monoxide have been performing since the late 90s. It shows in their chemistry and ability in engaging the audience. Madrox worked the crowd, drawing in fans to participate. They sang along, bounced to the rhythm, and waved their hands in the air. Twiztid put on a terrific show which toppedÂ a fantastic night of music.