Crazy builds, being cooler then Grohl before his fall, and hangovers that would scare AA into giving up. Yes friends, Blue Felix is on deck.

Toxsick (Vocals), Alien (Drums), Ybot (Keys), Rev. John (Bass), and Xhail (Guitar) are the members of the experience known as Blue Felix. Hailing from Minneapolis, MN, this self-described, unsigned, rock/metal/groove band is returning to the Mitten to once again put on a spectacle for your consumption. The guys are gearing up for quite a few things in the near future. So let us turn to the few minutes Xhail was able to take away from writing and rehearsing to talk with National Rock Review about Dirt Fest 2015.

NRR: You guys were at the 2014 version of Dirt Fest on the sensational National Rock Review stage and you are playing again this year. What’s been going on with the band in the last year?
Xhail: Finally a bit of rest. We took a few months off, for the first time in almost six years. But weâ€™ve been busy writing new songs, and finally started pre-production on a new album this spring. The studio is always a slow methodical process for us, but we hope to have the record done by early next year.
NRR: Hopefully you guys have a great time on stage this year. Are you looking forward to anything in particular at Dirt Fest2015?

Xhail: Weâ€™re excited to play with some of our favorite bands. But more than anything, we just love Michigan. Especially Flint. The Michigan dogs of doom never disappoint. They always show up foaming at the mouth, and we imagine Dirt Fest 2015 will be no exception.
NRR: Toxsick is a crazy tinkering genius. What has to be the most unique thing he’s made so far that you have to give him credit for?
Xhail: He just finished building himself a new rat-rod. He even used an empty Coldcock Whiskey bottle for the intake. But heâ€™s always finding new ways to come up with something. He also pulled the exhaust pipe off a Harley and fit it to the generator on our bus. But some people donâ€™t realize heâ€™s also a master with a sewing machine. All of our stage clothes are made by hand. Heâ€™s also constantly sewing new custom merch designs. Custom sewn hoodies are very popular.
NRR: Can we expect new masks or looks from you guys or will it be classic Blue Felix and fuck being trendy?
Xhail: Weâ€™ve never really been guys to go with trends. Our look and our sound is always evolving. We may switch the look up a bit next year with a new album. But as far as Dirt Fest 2015, itâ€™ll be the classic scumbag Blue Felix that our fans have come to embrace.
NRR: How is everyone’s health and is everything good to go with you guys on that level?
Xhail: Solid for the most part. Toxsick broke his leg on stage in Toledo a couple years ago, and has since gone through a couple of surgeries. But heâ€™s been back to 100% for a while. As for the rest of us, weâ€™re fine aside from nursing a 24/7 hangover.
NRR: What can we expect from Blue Felix in the next few months?
Xhail: Midwest shows. We have several coming up, including Dirt Fest. Fans can always keep tabs on our tour dates by checking out our official Facebook, or visiting www.bluefelix.com.
NRR: Is there a band or bands on this year’s Dirt Fest line-up that you are looking forward to seeing as fans?
Xhail: Down will be fun to watch. Most of our favorite Dirt Fest bands play on Friday though, which is a bummer. The cool thing with Dirt Fest is finding awesome new bands that youâ€™ve never heard of before. Itâ€™s a great cultivator of new young talent.
NRR: How important is the merch table for you guys at a festival like this?
Xhail: You canâ€™t even begin to quantify how important merch is for us at every show. Merch sales are the biggest way the band keeps afloat on the road. Plus, once someone leaves with a t-shirt, it equates to future advertising when people see them wear the shirt and ask about the band. The battle is constantly coming up with new designs to keep it fresh for the fans.
NRR: For anyone that might not have heard your music before or seen you live, how would you describe the spectacle that is a Blue Felix show live, up close, and personal?
Xhail: Spectacle is a good word to use. Explosive, obnoxious, offensive are all words that come to mind as well. If people just wanted to listen to the music, theyâ€™d stay home and play the CD. When they pay money to witness the performance, they want to see a show. We give everything we have to make sure they get that every time. Even if you hate our music, weâ€™ll keep you entertained for an hour.
NRR: On the drive over to Birch Run, from Minneapolis, who gets to control the radio and what will be the most unusual thing that might be heard coming from the bus?
Xhail: You name it, youâ€™ll hear it. Everything from the most extreme metal, to 90s alternative, to hip hop, to classic rock. Even the Backstreet Boys, we have a video to prove it. We listen to basically everything aside from country. 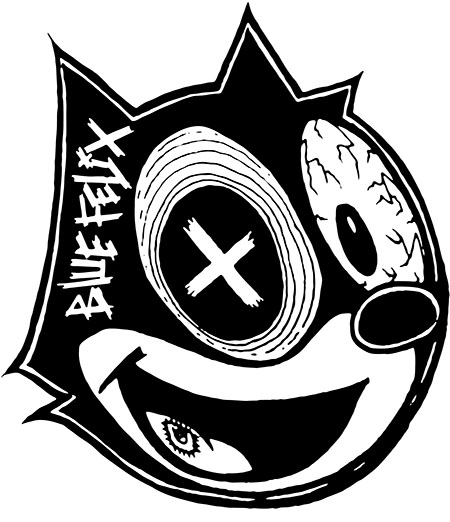