From the Royal Albert Hall to Red Rocks and now the legendary Greek Theatre, there seems to be no stopping Joe Bonamassa.

Live at the Greek Theatre is the latest in Joe Bonamassa‘s series of live recordings from the world’s most prestigious concert halls. This time around, we find him on the final night of his Three Kings tour in his hometown of Los Angeles, California.

This show is significant to Bonamassa on a number of levels. The first of which being that the concert pays tribute to among others, his mentor, the great B.B. King who took Bonamassa under his wing at a very young age. Secondly, Joe explains that 13 years ago upon his arrival in LA, he lived a mere stone throw away from the Greek Theatre, and it has always been his dream to perform there. 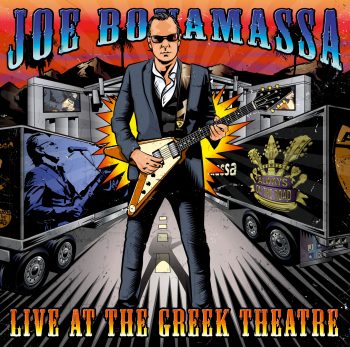 Bonamassa challenges himself constantly and pushes the boundaries of blues music. With this his latest project, his performance seems to be even bigger and better than ever before. Armed with an arsenal of vintage guitars, Joe proceeds to pay tribute to the “Three Kings” and as such splits the show into three distinct parts.

Firstly, Joe grapples with the music of the legendary Freddie King opening the show with “See See Baby” from Freddie’s 1961 debut album, Freddie King Sings. As we’ve seen in previous Bonamassa performances, his partnership with Reese Wynans is incredibly effective. The pair play off each other throughout the course of the show, particularly during “Sittin’ On The Boat Dock”. A superb Wynan’s piano solo leads the band into the Freddie King classic, “Going Down”.

You just have to listen to “I Love Lucy” by Albert King to realise what his much-celebrated Flying V meant to him, and Joe has the enviable pleasure of playing “Lucy” during the second part of the show. He launches into Albert King’s “I’ll Play The Blues For You” and doesn’t he just. Joe brings the groove with the classic “Breaking Up Somebody’s Home” and exhibits some passionate playing during the huge sounding “Angel of Mercy”. He picks up the pace with “Oh Pretty Woman” from the seminal album, Born Under A Bad Sign, which closes with a superb Anton Fig drum solo.

The swinging jump rhythm and blues number “Let The Good Times Roll” ushers in the B.B. King set and features a beautiful vocal solo from Mahalia Barnes. Bonamassa most certainly has got that distinct B.B. King tone down and with the addition of the distinctive horn section the performance has a sound which is reminiscent of B.B.’s much-revered album, Live At The Regal Theatre. Joe walks the audience through the likes of the Gospel tinged “Ole Time Religion”, and a sublime rendition of slow blues number “Nobody Loves Me But My Mother” before wrapping up his main set by putting his own stamp on the superb “Hummingbird”.

The encore of the show sees Joe perform one track from each of the Three Kings including Freddie King’s instrumental blues number “Hideaway” and Albert King’s dirty blues number “Born Under A Bad Sign” before bringing the show to a fitting close with B.B. King’s “The Thrill Is Gone.”

The world class group of musicians which Joe has assembled for this show seems to have grown somewhat since the last time we saw Joe perform. The addition of a trio of Australian backing vocalists Mahalia Barnes (daughter of Jimmy Barnes), Jade MacRae, and Juanita Tippins works incredibly well, adding complimentary soulful harmonies.

Bonamassa’s only regret about this show was that B.B. King never actually got to see it, having passed away just two months before the start of the tour. However, one thing is for sure on the strength of this release; he most certainly did his mentor proud.

Live At The Greek will be released on CD/DVD/Blu-Ray and 3LP set via Mascot Label Group/Provogue on September 23rd.