Walter Trout releases his third studio album inside of four years in the shape of Survivor Blues.

For Walter Trout’s latest release he has taken a different approach to his recent albums in that this time around he has delivered a record comprising entirely of covers. However, this is not just your average blues cover album. For this project Trout has delved deep into the discographies of many of the artists that have influenced him over the years, and unearthed a treasure trove of deep cuts and hidden gems. 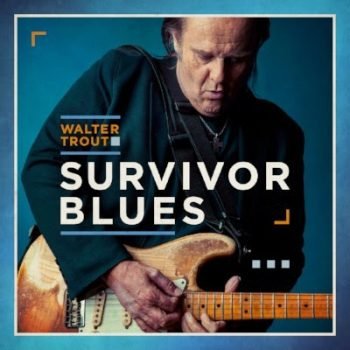 Speaking of the subject Trout goes on to say “I’m riding in my car sometimes,” says the US blues titan. “I’ve got a blues station on – and here’s another band doing ‘Got My Mojo Workin’. And there’s a little voice in me that says, ‘Does the world need another version of that song?’ So I came up with an idea. I didn’t want to do ‘Stormy Monday’ or ‘Messin’ With The Kid’. I didn’t want to do the blues greatest hits. I wanted to do old, obscure songs that have hardly been covered. And that’s how Survivor Blues started…”

The album itself kicks off with Walter Trout’s spellbinding take on Jimmy Dawkin’s “Me My Guitar And The Blues”, and it does not disappoint. This epic slow blues number continues to build throughout before Walter breaks into a passionate and explosive guitar solo that is fuelled by raw emotion and packed full of blistering fretwork.

From here Trout picks up the pace with his take on Sunnyland Slim’s politically tinged and fiery blues standard “Be Careful How You Vote” before switching gears into the somewhat funky groove of Luther Johnson’s “Woman Don’t Lie”. The beauty of Survivor Blues is that each song brings something a bit different to the proceedings.

Trout’s soulful take on Hound Dog Taylor’s “Sadie” brings an almost a Stax/Booker T and the MG’s feel to Survivor Blues. And during which his blistering yet mind-bending solo on this track, in particular, stands out from the rest.

Trout’s blues exploration continues as he turns his attention to the man who he regards as the greatest bluesman of all time with a cover of “Please Love Me”. During this track Trout is well and truly channelling the late great man himself, as he puts forward his slightly up-tempo blues-rock take on the swinging BB King number.

Trout rallies towards the finish as he explores the Chicago blues scene by putting his own distinctive stamp on “It Takes Time” by Otis Rush and “Out Of Bad Luck” by Magic Sam. At the age of 32, the latter of which was sadly taken too soon back in 1969 but continues to inspire and influence artists to this day.

One of the most unique songs on the record is “Goin’ Down To The River” by Mississippi Fred McDowell. With its Delta Blues groove and accompaniment on keys by Robby Krieger, it’s certainly one of the many standout tracks on the album.

With most blues compilations you wouldn’t be surprised to find many of the names of the artists featured on Survivor Blues. However, it’s the deep and rich track selection which Walter handpicked to cover, the wide variety of musical styles within the blues genre featured on the album along with Walter’s incredible personal interpretations of these songs that make this album stand out from the rest.