Ulysses unleash the long-awaited follow-up to their impressive 2013 release, Kill You Again, coming back stronger than ever.

For Bath’s psychedelic rockers Ulysses, and their fans alike, it’s been a long time coming, but their new album Law And Order, is worth the wait. The songs have been in the can for a while, and have done the rounds at the live shows, but it’s great to see the album released at last.

Put out on their Black Glove Recordings label, the album has been produced by Steve Evans (Robert Plant / Siouxsie / Goldfrapp) and recorded at the famous Monnow Valley Studios. 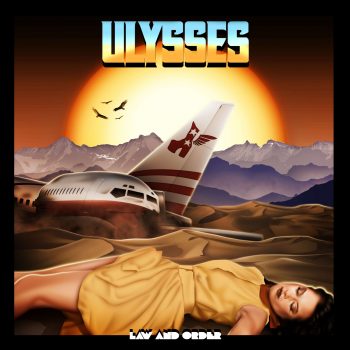 The album kicks off with the superb title track, and new single, “Law And Order.” Occasional comical lyrics play with serious backing music and sets the tone for the next 46 minutes.

“Law And Order” begs to be used as a film score, as the music video shows.

It has also appeared in Classic Rock magazine in their Tracks of the Week and Heavy Rotation sections, getting the band some well-deserved national coverage.

“Lady,” “Mary Jane” and “Come On This City’s Gone” are all outstanding tracks which will have you singing along, and fit in well with the rest of the album tracks.

“Song That Has To Be Sung” features superb vocals by Rosalie Cunningham of Purson, and has a genuine 70s feel.

The last track, the catchy “How Long?” is an album single and an excellent way to end a superb album.

70s pop, rock, psychedelia, and glam accentuate with big guitar riffs; Ulysses has created a unique, up-to-date sound. Law And Order deserves to be heard and a place in your music collection.

Law And Order drops on June 03, and can be ordered on CD from the band’s website, and is available for download from iTunes.