The US touring package known as the Carnival of Madness touches down in the Leeds as part of its maiden voyage around the UK.

This is not a typical carnival. There are no rides or roller coasters, just pure unadulterated rock and roll. The Carnival of Madness set up shop Stateside several years ago during which time it has taken a veritable “who’s who” of the rock world out on the road. Its debut outing in the UK offers the same high calibre artist lineup with Black Stone Cherry, Shinedown, Halestorm, and Highly Suspect joining Carnival on its first transatlantic adventure. For concert goers, this tour delivers a lot of bang for your buck.

A large crowd gathers early as the Brooklyn-based trio of Highly Suspect kicked off the proceedings. The band is enjoying great success at the moment, having recently received Grammy nominations for both their last album, Mister Asylum and the first single from the album, “Lydia.” The band, featuring twins, Rich and Ryan Meyer, and their best friend, Johnny Stevens, deliver a short but tight set mostly centring around their latest offering. They leave the audience suitably warmed up for the mighty Halestorm.

Having a band like Halestorm perform this early in the evening truly is a testament to the strength of this concert bill. The band has sold out theatres across the UK for some time now and their fans are out in force. How do you go about cutting down one of their hard-rocking shows into a 40-minute set? It’s a challenge the band accepts wholeheartedly. They take the stage with guns blazing jumping straight into a triple whammy of “Apocalyptic,” the classic “Love Bites [So Do I],” and “Amen.”

With a shorter set this evening, Halestorm chooses to showcase more of the material from their new album, Into The Wild Life. Lzzy Hale, armed with her trusty double neck Gibson, launches into the superb “I Am The Fire,” with Josh Smith playing keys on the track adding texture. The rather frantic “Mayhem” is a treat for all, whereby guitarist Joe Hottinger shows he is quite the shredder.

A bit of sibling rivalry ensues with Arejay Hale taking the spotlight with a pounding drum solo. Arejay engages the audience with some call and response as he delivers a medley of “Rock and Roll All Nite” by Kiss, “Blind Man” by touring counterparts Black Stone Cherry, and “Highway to Hell” by AC/DC. He is a real entertainer and a pleasure to watch. Halestorm closes their set with a couple of fan favourites in the shape of “Freak Like Me” and “I Miss The Misery” from The Strange Case of, the crowd hanging on every word. 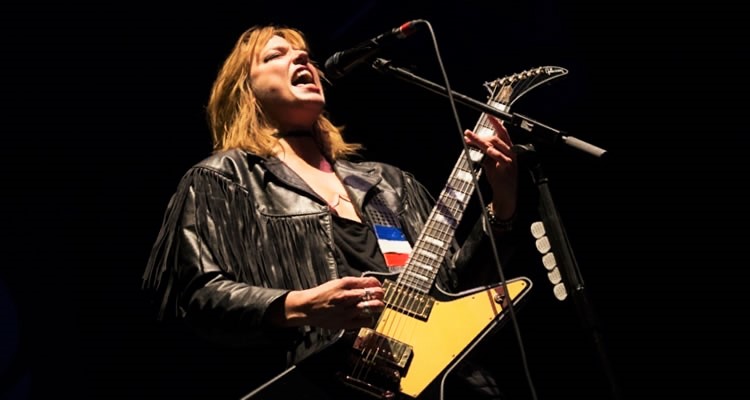 As Shinedown hits the stage, everyone takes to their feet, even those at the back of the arena, proving their popularity in the UK. The band opens their set with “Black Cadillac” from their most recent album, Threat To Survival, before unleashing “Diamond Eyes.”

However, the turning point in their set is most certainly when frontman Brent Smith descends from the stage, venturing out into the middle of the arena to get up close and personal with the fans. He orchestrates the audience as the band belts out “Enemies,” the crowd obeying Smith’s every command. The venue erupts as Shinedown shakes the very foundations of the arena. The atmosphere in the room is electric, the crowd jumping up and down from the start.

Shinedown from this point has the Leeds crowd eating out of the palms of their hands as they lead into “State Of My Head.” With only Smith and Myers remaining on stage, they slow down the pace with an acoustic segment. Myers entertains the crowd with the opening riff from the Pink Panther theme before grappling with their stunning cover of Lynard Skynard’s “Simple Man.”

The band closes their set with “Sound Of Madness”; there couldn’t be a more appropriately titled track to finish their set. The song lights the blue touch paper in the room and complete pandemonium follows; fans pump their fists in the air and circle pits open up. Shinedown most definitely leaves their mark on West Yorkshire.

It’s been a decade since the release of Black Stone Cherry’s self-titled debut album. The band is presently getting ready to release their forthcoming album, Kentucky, on the April 01 via the Mascot Label Group. Tonight, they whet our appetite for a taste of what is to come with both “The Rambler,” a track different from anything the band has done before, and “In Our Dreams,” the first single to be released from Kentucky.

All of the classics are there as you would expect with the likes “Me and Mary Jane,” “Rain Wizard,” and “Blind Man.” Smoke cannons fire whilst walkways and risers around the stage provide the perfect playground for guitarist Ben Wells and bass player Jon Lawhon to run wild. Ben’s onstage energy is second to none. A bluesy jam leads the band nicely into “Soulcreek.”

The band’s powerhouse drummer, John Fred Young, takes centre stage with an epic drum solo. Young is joined part way through his solo by Halestorm’s Arejay Hale, the pair having a lot of fun in the process creating somewhat of an impressive, almost tribal, rhythm. Chris Robertson declares the pair “two of the best drummers in rock and roll.” The people of Leeds would seem to agree.

Cell phones illuminate the room as Robertson stands alone centre stage singing the heartfelt, “Things My Father Said.” At this point, the size of the arena is forgotten; it feels intimate with both the crowd attentive and respectful throughout. Lzzy Hale adds guest vocals to “Peace Is Free” before the band closes their main set with the hard rocking “White Trash Millionaire” and “Blame It On The Boom Boom.”

“We are Black Stone Cherry and we play rock and roll” declared Robertson as the band finish the night off in style by paying tribute to the late great Lemmy Kilmister and Motorhead with a fierce cover of the “Ace of Spades.”

This concert may well be the first Carnival of Madness tour in the UK; we hope it’s not the last.