In 1994, a legend was born from the sorrow and horrible abuse coming from a child grown up. Korn is coming back with that album.

It was announced earlier in the day on Jul 21, 2015 that Korn will head out on the road for one last turn in 2015 to perform their debut album KORN in its entirety. The current line-up of the band, Jonathan Davis (Vocals), James “Munky” Shaffer (Guitar), Brian “Head” Welch (Guitar), Reginald “Fieldy” Arvizu (Bass), and Ray Luzier (Drums), wanted to bring the show to a smaller, more intimate series of venues for the die hard fan base.

This leg of the tour will start Oct 1, 2015 in Chicago, IL and will last for a month. At each show, fans will get to experience Korn two decades later and be able to request which songs from the band’s massive catalog should make up the encore. Joining Korn on the tour are special guests Suicide Silence and Islander.

The self-titled debut album, which was released in May 1994, went on to sell over two million albums worldwide. The album was produced by Ross Robinson, and the critically acclaimed record had the singles “Blind,” “Shoots and Ladders,” “Clown,” and “Need To.” Current rumors are that Korn will return with a new album in 2016.

There are two special packages for tickets at each night of the tour. The Platinum VIP Package is limited to 40 tickets per night and consists of the following:

The Gold VIP Package has limited availability and comes with the following perks:

They will go quickly, so if you are thinking of attending any of the shows, we recommend going to the Korn website and ordering them as soon as they go on sale Jul 22, 2015 at 10:00 am local time.

“… Korn put everything on the line, especially with ‘Daddy,’ a harrowing song about Davis being molested as a child that ends with nearly four minutes of the singer sobbing in the vocal booth.” ~ Christopher Weingarten of Rolling Stone (12/11/14) 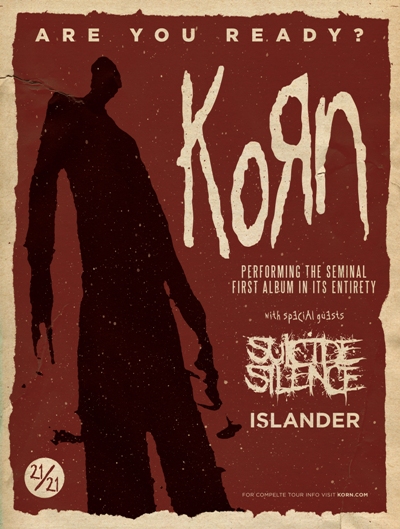