RavenEye follows up on last year’s critically acclaimed Breaking Out EP with their debut album Nova.

Since the band’s formation, RavenEye have hit the ground running so to speak, touring with the likes of Slash, The Darkness and Halestorm as well as several headline tours and numerous festival appearances around the world.

Many will be familiar with work of the band’s frontman, Oli Brown, proclaimed by Mojo magazine as “the hottest young pistol in British blues”. However, with RavenEye Brown has left the blues behind in favour of his love of rock. The band’s lineup has been completed by Aussie bassist Aaron Spiers and drummer Gunnar Olsen, who come together to produce one hell of a power trio. 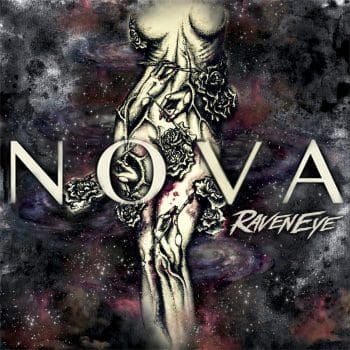 Immediately from the off the incredible “Wanna Feel You” sets the tone for the album with its sludgy grunge-tinged groove. Brown’s vocals and range are comparable to that of Chris Cornell, and this is particularly prominent during the opening track, the epic mid-tempo “Supernova” and “Oh My Love”.

The fast paced, fuzz-fueled riffs, crashing drumline and driving bass line of the likes of “Come With Me” and the incredibly infectious “Inside” give the band an almost Queens of the Stone Age-esque vibe. RavenEye’s sticks man Gunnar Olsen is one of the most powerful drummer’s we’ve come across since Joey Castillo.

On the other hand, the hard-rocking first single from the album “Hero” has a much wider mainstream appeal before the beautifully epic closing number “Eternity” changes the pace from the rest of the album, starting off with a slow acoustic intro as it builds and winds.

With Nova, we hear a continuation of the evolution of the band’s sound since the release of their debut EP, and with this their first full-length record it feels as if they’ve found themselves. One thing is for sure about Nova; it certainly won’t leave you with a case of the blues.

RavenEye’s debut record Nova is out now via Frontiers Music s.r.l. The band will also be embarking on a full UK tour throughout October and November in support of the album.