Before mixing was even complete for Beth Hart’s last album, Better Than Home, the Grammy-nominated singer/songwriter knew that she had to make another album right away.

This album was to be Beth Hart’s emotional release following the recording sessions of Better Than Home (Amazon), which were so painful for Hart as one of the producers, Michael Stevens, was battling cancer. Following discussions with her record label, Hart headed into the studio with famed producer Oliver Lieber and a world class studio band including among others Michael Landau and Waddy Wachtel on guitar and Fire On The Floor (Amazon) was born. 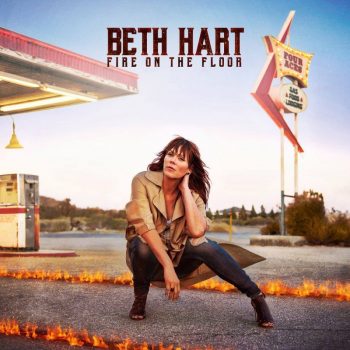 The ambience portrayed by the opening number “Jazz Man” transports the listener to a swinging, uptown Manhattan piano bar. Smouldering jazz number “Coca Cola” depicts Beth’s sultry side and with this song and throughout the album, Beth shows off her remarkable vocal range. Hart effortlessly hits those sustained high notes; she has a voice which is second to none.

With “Let’s Get Together” we get an up-tempo, cheery, soulful number with mainstream appeal. Beth lets loose with her angry love song “Love Is A Lie” for which a new video is in the pipeline. The rawness of heartfelt numbers like the latter, “Woman You’ve Been Dreaming Of”, “Picture In A Frame”, and album closer “No Place Like Home” highlight Beth’s incredible songwriting ability.

A superb finger picking guitar intro leads us into the infectious blues-rock number “Fat Man”. We continue on the blues tip with the likes of the rather funky “Baby You Shot Me Down” and the title track “Fire On The Floor”, which is a textbook Beth Hart number if ever there was such a thing.

Fire On The Floor has a lot of depth and so many layers which are gradually revealed as each song is peeled away. The record is genre defying, to keep things interesting for both the listener and Beth Fire On The Floor traverses blues, soul, gospel and rock. Oliver Lieber has done such a great job on the production. With Beth Hart’s latest offering, the floor is not the only thing which is on fire.

Fire On The Floor will be released via Mascot Label Group/Provogue on 14 October. Beth Hart will embark on a headline UK tour in support of her latest record which starts on the 11 November in Birmingham.