The moral of today’s story, kiddies, is you can’t judge a book by its cover.

Altoona didn’t look all that promising when we rolled into town. Very small town not too far from Pittsburgh. The venue was much smaller than any we had played to this point, other than St. Vitus in Brooklyn, which had its own cool vibe. There were two stages, but it was an odd setup. The locals would play on the second stage, and ISD and Fates Warning would get the “big” stage.

We didn’t really know what to expect, especially since listed on the bill was Don Jamieson of That Metal Show on VH1. We found out he was there to do some standup and announce the bands. Ok, that’s different, but cool since we all like his TV show. Added intrigue and shenanigans! Right up our alley.

A nice thing about this show and the two stages was that we got a full sound check instead of a line check. We set up and played a full song to get everything dialed in. What a difference that made!

The singer for one of the locals read the back of one of our shirts before we started and asked our merch guy, Greg, what “Progressive Super Metal” meant. He said, “You’ll find out.” (We love Greg). After we had played our soundcheck song, (The Fog), she told him she understood now. Of course, it was hard for her to enunciate through the layers of gooey melted face. I kinda felt bad for her. Kinda.

We met Don Jamieson when he got there, and he was a SUPER cool guy, very friendly and talkative. Really loves metal and doing what he’s doing, you can tell. Genuine dude. He told us he would announce our set, and wanted to know what we wanted him to say. Well, if you’re going to ask us that, be prepared. We wrote up a Tenacious D style intro for him, and he delivered it perfectly:

“The next band asked me to read this: Rush, Crosby Stills and Nash, and Meshuggah couldn’t be here tonight, but they all had sex and are proud to announce the birth of their five-headed Progressive Super Metal baby, Imminent Sonic Destruction.” After that, we were off! 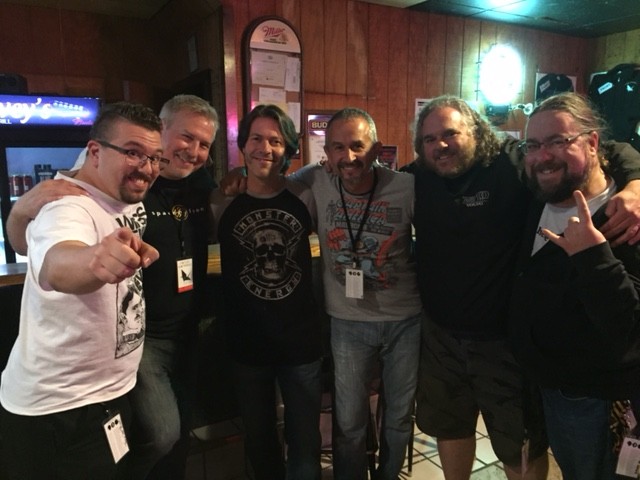 Like I said, we weren’t really sure what to expect here, but the show felt great for us performance-wise, and after a couple songs the crowd was REALLY into it. Really enthusiastic, which of course, makes our job so fun it’s not even fair.

When we finished, there was a line at our merch table. That is a bit unusual; we usually do our best merch sales at the end of the night when Fates is done. Altoona, you kicked our asses, and we didn’t expect it. Nice work! Of course, you also all left sterile at the end of the night, so let’s call it a draw.

Only one more show left for us, which is very bittersweet. The Fates guys and their crew have been awesome to us and are truly great guys. We’re having a blast, so hopefully our last show will be worthy of remembering! Unless we all get blackout drunk. Which is possible I suppose. Tune in to find out!