Glenn Hughes makes his eagerly anticipated return to the North East and his first visit to the region since 2011.

Opening the show is young U.S. gunslinger Jared James Nichols, making his debut in Newcastle. Nichols has received rave reviews of late, and it’s easy to understand why. Kicking off his set with a triple whammy of tracks from his debut album, Old Glory and the Wild Revival, he plays the hard-rocking “Blackfoot,” “Crazy,” and the incredibly catchy “Haywire” that is one of the standout tracks of his performance. 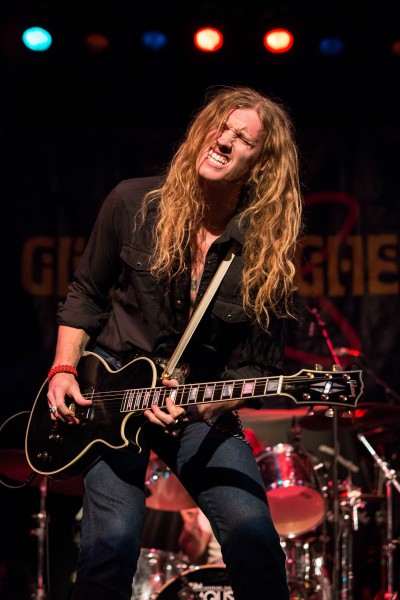 Nichols is reminiscent of a young Zakk Wylde, a real shredder with lots of flare. His set also includes a superb cover of the Johnny Winter/Rick Derringer number, “Rock and Roll Hoochie Koo,” before slowing down the proceedings with some sweet slide delta blues in the shape of Robert Johnson’s “Come On In My Kitchen.”

Nichols has the crowd singing along to the ever so funky, “Baby Can You Feel It,” before launching into the groove heavy, “Playin’ For Keeps,” with its pounding bass line. The band has fun as they follow the track by taking it off piste by intersecting “Norwegian Wood” by the Beatles into the mix. They bring their set to a close with the Southern rock classic, “Mississippi Queen” by Mountain, which sounds amazing.

Following the fall of his short but sweet side projects, Black Country Communion and California Breed, Glenn Hughes has gone back to basics by taking his solo band out on the road. Joining the “Voice of Rock” is none other than former Whitesnake axeman, Doug Aldrich, and Glenn’s long-standing drummer, Pontus Engborg.

Tonight Glenn Hughes is celebrating four decades of rock and what a songbook in which to delve. Hughes delivers a career spanning set of classic rock masterpieces, although there is no room in the set for material from his last band, California Breed.

Hughes opens the show with the Deep Purple MK3 classic, “Stormbringer” with its rolling groove. It is one of several Purple tracks included in the set, including “Sail Away” and a monumental rendition of “Mistreated.” Hughes tells the amusing story of how Chad Smith encouraged him to take on the signature Coverdale track. There is a very apparent mutual respect between Hughes and Coverdale.

Hughes takes us back to the beginning of his career with the Trapeze numbers, “Way Back To The Bone” and “Touch My Life,” dedicating the latter to the late Mel Galley. The band also include the classic “Good To Be Bad” from Aldrich’s former employer, Whitesnake. There is incredible chemistry between Glenn Hughes and Doug Aldrich. They look like they are enjoying themselves as much as the fans and are a pleasure to watch. Here’s hoping that the pair gets into the studio together; what a writing partnership that would be.

Although the show is billed as Glenn Hughes, everyone gets their moment to shine with both Aldrich and drummer Pontus Engborg taking a solo spot; this is a band of brothers. There is a great connection with Hughes and the audience; he appears to be very humbled by the Geordie crowd.

The band bring their main set to a close with the first track he wrote for Black Country Communion, “One Last Soul,” and “Soul Mover,” leaving the stage to rapturous applause. Not wanting to disappoint their audience, the band returns to the stage, and the show closes with the classic, “Burn,” as the audience would want and expect.

This is pure, unadulterated rock and roll at its best. Glenn Hughes came; he saw; he rocked Newcastle. Here’s to many more years of Glenn Hughes rock.