Howie D. from Hard Edge Radio and National Rock Review had a recent conversation with legendary heavy metal singer, John Bush, from Armored Saint. They talked about the early days if he ever regrets turning down the offer to join Metallica, the years with Anthrax, the new CD, plans for the future and more.

Armored Saint is getting ready to release their brand new studio album, Win Hands Down. This will be the first Armored Saint release since 2010’s La Raza album. The band has some tour dates coming up with rock legends, Saxon, and they are planning to tour Europe later this year. They’ve also just announced what is so far the only US headlining show, this will happen at Count’s Vamp’d Rock Bar in Las Vegas on July 11th. Judging by the new song that’s been airing lately from the new CD, Armored Saint is back and ready to show the world that they’re not done sharing their brand of LA style heavy metal just yet. Please click below to hear the interview with John.

The interview with John Bush from Armored Saint:

Win Hands Down, the upcoming new CD from Armored Saint: 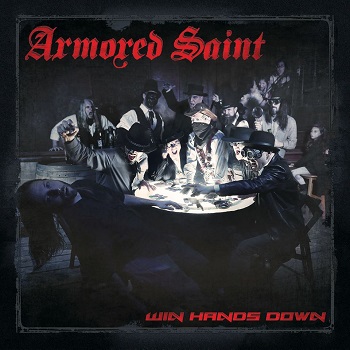