Following the success of the first ever Chicago Open Air Festival last year, it’s coming back for another year.

The festival, which takes place on July 14 -16 at Toyota Park in Bridgeview, IL, is bringing together some of the biggest names in rock and metal. The three-day music, craft beer and Gourmet Man Food festival will have over 40 performances.

The headliners will be Kiss on Friday, Korn on Saturday and Ozzy Osbourne will be closing out the festival on Sunday night. Other rock legends who will also be performing throughout the weekend are Rob Zombie, Slayer, Anthrax, Meshuggah, Megadeth and Lamb of God to name just a few.

Tickets are available at www.ChicagoOpenAir.com for the following prices: 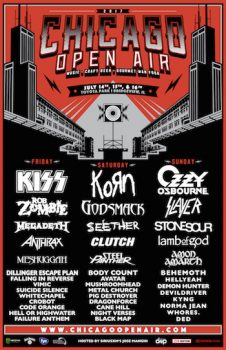