Minneapolis, MN band Gabriel and the Apocalypse are another promising unsigned band. These veterans of the music scene are looking to go Super Saiyan.

Lindy Gabriel and Jake LaCore sat down with National Rock Review for a few minutes to discuss a variety of topics. This heavy rock/industrial outfit is already well known regionally and is looking to expand that notoriety even further from coast to coast. So, enjoy the ride through bugs, JÃ¤germeister, and a new video. Now, on to the show.

NRR: I’m sure this is a question you dread getting right of the bat, but tell me about the band. Where did the name come from and how did you guys come together to form the band?
Lindy: The band took shape around 2009 when Jake and I met Figgles and started putting new songs together and started work on what would become new World disAsteR at the end of 2011. The name is inspired by revelations and the end of the world apocalyptic theme.
NRR: For those not familiar with the band or the Minneapolis music scene, if you had to describe your sound to a new fan-base how would you pitch your vibe?
Jake: I would say that we are unique in the Minneapolis music area being a female fronted industrial hard rock band. A little different than many of the other popular rock bands in the area. To put it in perspective I guess you could say Marilyn Manson meets Shirley Manson.
Lindy: We like being an energetic, visual, live band.
NRR: Being from Ohio, I’m a huge Mushroomhead fan. Will you tell me how the single from your 2011 album, New World Disaster, came with a guest vocal from Rick Thomas on “Like God?”
Lindy: We had played a show with Mushroomhead and hung out with them after the show. After that we became friends and stayed in contact. Mushroomhead came back a while later for a show in Minneapolis and after the show we kidnapped Rick and brought him to the studio and basically forced him to lay down a track. (Laughing) It wasn’t a planned out thing at all.
NRR: You guys released a four song EP, Everything Is Red, in 2014. What can you tell me about it, how it was made or what makes it special for you?
Lindy: For me that CD is a personal and more of a stripped down and emotional piece of work that we’ve done. It is a very moody and artsy collection. We did a lot of experimenting with synth layers and sounds.
NRR: Every band I’ve interviewed has a slightly different answer for this one, but how does a typical track from you come to be? Is it the work of mostly one person and then shared to flesh it out or is it a truly group effort for every song?
Jake: We always start with a solid idea that someone brings to the table. There is already at least a couple different parts structured together then we look at that song idea and collaborate on the arrangement and adding layers, vocals. We are in the recording process from day one of a song conception.
NRR: Is there any projects going on right now that have you excited as a band or maybe tours getting ready to start that you’d like to share with me?

Gabriel and the Apocalypse – “Beauty Under Glass”

Lindy: We’re excited we released a new song and video for “Beauty Under Glass.”
Jake: Excited for new releases by Puscifer, and Deftones coming up.
NRR: Speaking of being out on the road, you guys have been around the circuits more then once or twice. Has there been any moment that stands out as that one defining moment that when brought up now will always lead to laughs or a slightly embarrassed telling? Your Spinal Tap moment if you will.
Jake: Speaking of Spinal Tap, someone once did lower a miniature Stonehenge onto the stage from the ceiling during the middle of one of our songs. Lindy was kinda pissed, but it’s funny looking back. She hadn’t seen the movie before then and didn’t understand the reference… (laughing).
NRR: Out of the many national artists you’ve played with, Otep, Flyleaf, and PM5K among others, is there a band or a show with a certain band that is the defining experience that just proved to you you were on the right path musically or, say, career wise?
Jake: I think just the fact that we’ve gotten to play shows with so many great bands from different corners of the world and gotten to see new places and share our music with people is what makes me feel rewarded. 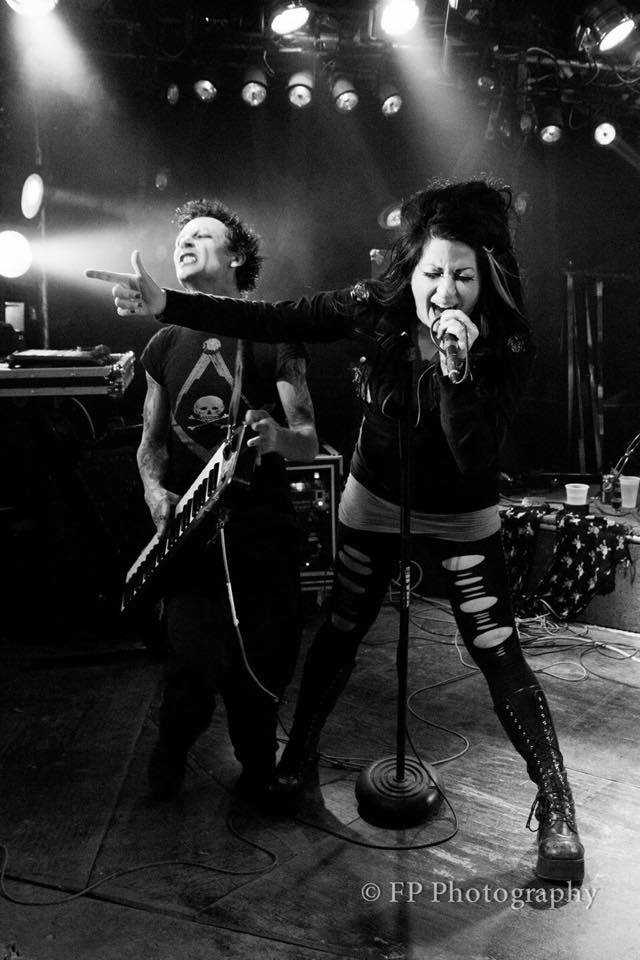 NRR: There has been a bit of debate to the issue of artists doing original work versus the bands that may take a cover and make a huge hit out of it. Do you think all is fair in the climb to be a successful band or are you more on the side that making a name for yourselves on your own music is more important to you, and why?
Jake: We don’t have any covers we’ve recorded thus far. We’ve always just focused on originals. I don’t mind a lot of covers that Manson, or A Perfect Circle have done. I think it depends on the band and song.
Lindy: I think doing a cover is cool if you can dissect the song and make it your own. It’s kinda pointless to do a cover if your just going to play it exactly the same.
NRR: In the time that the band has been around, I’m sure you have had good days and bad. What has been one of the hardest lessons to learn since you’ve been after musical glory and immortality in this industry?
Jake: When you are young you have this illusion in your head of what it’s like to play in a band and “making it big” and you realize when you actually do it that it’s much different. You can’t really count on anyone to just make things happen for you. You have to make it happen out of working really hard at it and making good music.
NRR: An adult beverage company comes calling saying they want to throw money and free product at you to take on your next tour. If the thought of a sponsorship doesn’t sound too bad, who or what brand would be on the top of your list for that chance?
Lindy: JÃ¤germeister all the way!
NRR: How important is social media to the band as far as interacting with your fans and perspective new converts? Is it the best way for you or would you still rather have people see your live show and come away from that a fan?
Jake: I think the social media is a great tool for us and it’s an important vehicle to share our music. We have four music videos out on YouTube, so we use media coverage to share it. We hope to find new fans that way who will then come out to see us. It’s also cool to play shows with other bands and share your crowds and get exposure to new people that way.
NRR: Is there any little creepy-crawly that if you were to see it before a gig, you’d want to see the venue burn down to make sure it was dead first before playing?
Lindy: I love all animals including bugs. June bugs kinda freak me out. I love spiders.